Soan Papdi, the most ‘forwarded’ mithai on Diwali 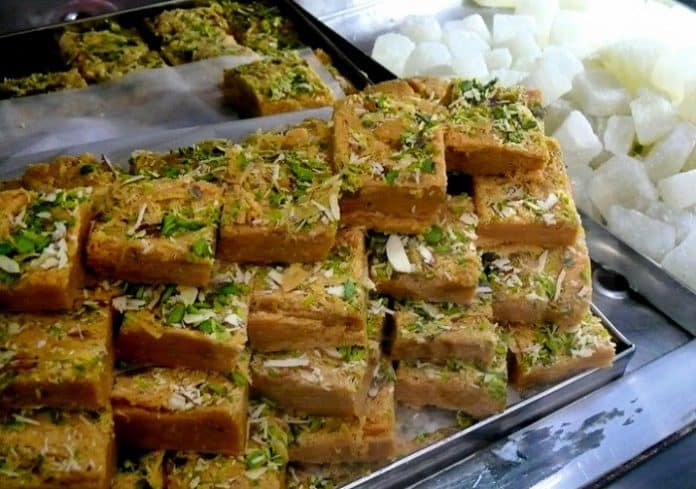 Ever wondered why the Mooh meetha ceremony in India never features Soan Papdi? We don’t have an answer to this, but know well that this Indian candy floss, Soan Papdi, is born to travel. We mean from one household to the other, during festive times!

Soan Papdi is the most ‘forwarded‘ mithai on Diwali, just like recycled Diwali greetings on WhatsApp.

And so, you never gift Soan Papdi on Diwali, if you are expecting Kaju katli in return.

Many equate it to ghar ki safai during Diwali – an integral, but much disliked, part of the festival. Why is this simple mithai so derided that at Diwali every year social media collectively relegates it to the rubbish heap? (Is Diwali kuch achcha kaam karein – na soan papdi dein, na soan papdi lein.)

The answer can be one of many – that it is cheap, that it has long shelf-life, that it is one of the lowest categories of Indian mithais (you know, besan-based as opposed to dairy-based.)

Whatever the reason, it is often the last pick from a platter of mithai.

At my own childhood Diwalis, we ate up all the other mithai, and used the soan papdi for play – the cousins and I would throw it at each other when the grown-ups were not looking, the main aim of the game being to let it get caught in the strands of our hair – the ickier the better.

As a throwback to those old family Diwalis, I put up a post on Indian Link Radio’s Facebook page, asking people to identify  ‘this most popular Indian mithai’.  We got some quirky responses – Square besan laddoos; Chickpea cake with coriander topping (the green suggestion coming from the pistachio nuts, no doubt);  rasmalai with malai gayab. All responses showed why we treat soan papdi like a poor cousin of the burfis!

A bit of research showed that such ridicule is not really required of this flaky northern Indian dessert. Check out videos for the traditional preparation of this mithai (which has its background in Turkish cuisine, by some accounts) and you’ll start looking at soan papdi with newfound respect. For a crumble-in-your-mouth fairy floss type dessert, the amount of effort that goes in, is to be seen to be believed!

Besan and plain flour are roasted in ghee to a dough. A sugar syrup (chashni) is cooked to a toffee.

The toffee is then stretched and folded over repeatedly till it hardens. The process continues with bhuna besan added, until it all hardens so much that three pairs of hands and wooden batons are needed to manipulate it.  The mix is then painstakingly stretched and twisted and pulled till it thins out and separates like vermicelli first, then long blonde hair, and ultimately into light-as-air fluff.

Just watching the video is exhausting, given the chefs (halwais) go through what looks like an elite athlete’s workout.

My first reaction when I learnt of all this effort was of course, why bother? Just ban the damned thing as too labour-intensive, and forget about it!

Yet for those who do like it, here’s an easier, friendlier recipe.

Melt the ghee in a large saucepan. Add the flour, and toast till light brown then set aside.

Pour in the sugar syrup with the toasted flour. Begin to beat until flakes are formed.

Oil a pan with ghee, then sprinkle pistachios and almonds.

Pour the toasted flour mixture into the baking dish. Push down and press into 1-inch thickness.

Rest on the counter for at least 30 minutes, then cut into pieces.

There you go! You can try making Soan Papdi this Diwali (and risk a few friendships). Or you can pass on – or throw out – those that get given to you, like a true Diwali ritual.

Or, you could try these variations in an attempt to salvage this simple sweetmeat: