Fruitcake, that looked delicious for Christmas. 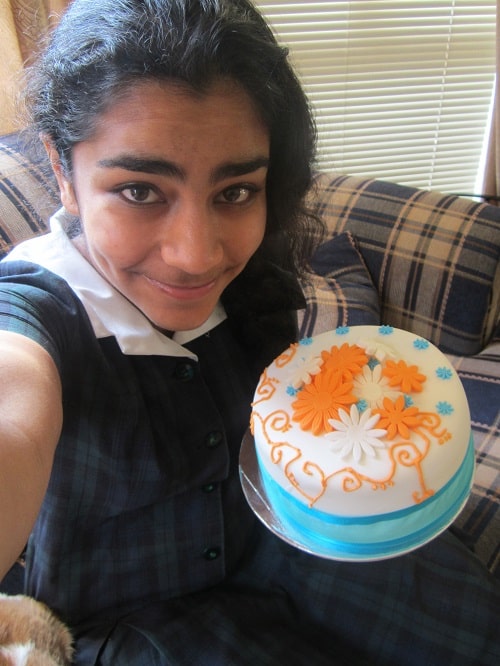 Reading Time: 4 minutesChristmas Fruit Cake
I’ve never really liked fruitcake. When I was younger and was given a piece at Christmas parties, I would politely smile, take it and say “Thank you, this looks delicious!” (Just as I was told to).
I would take the smallest spoonful I could manage and then slyly leave it behind a stack of plates or on a side table. The rich, heady smell of the rum-soaked fruit and thick, treacley, golden syrup was too much for my little tummy.
So when our Food Technology teacher announced this year we would be making and decorating fruitcakes as our final product in Term 4, you could say I wasn’t too excited.

However, making it from scratch was a different experience. We made the cakes in a practical lesson halfway through Term 3 in early September.
The rich smell that always used to make me feel sick was bouncing off all directions in the kitchen classroom… and surprisingly, I loved it! Our little station was littered with colourful dried and candied fruits as chopping and preparing was quite a task.
Making the fruitcake was easy enough, however you did need strong arms as there was so much mixing involved. We came back at lunch to take them out of the oven, and the smell was so rewarding.
It was sweet from the fruit, sugary from the golden syrup, rich from the rum and sherry, and warm from the essences and spices. My friend Jennifer from my cooking group smiled and said this was what her grandmother’s kitchen smelled like when they visited her every Christmas. It was almost funny to think of the contrast – when we visit our extended family at Diwali we are greeted with the smell of masalas and mithai!
The cakes were carefully wrapped in baking paper and left to mature in the storeroom over the holidays. The idea of eating a cake three months after it was baked seemed a little weird to me for a while!

The next step was deciding how to decorate our cakes. In the first lesson of Term 4, the class was told to do a collage of cakes we found interesting.
I spent a happy evening googling cake decorating designs – what lovely homework this was! Embarrassingly enough, one of my nerdy pleasures is watching the TV show Ace of Cakes, the cake decorating show, so I had an advantage.
I thought the cakes which had a paisley design were beautiful, almost like a cake mehendi design. I decided to do a paisley design with orange, blue and white flowers to represent spring. Around me, most people were doing Christmas-themed cakes, so mine was a nice contrast.
We were given white fondant, a play-dough like icing which is pure sugar, to do an under layer on the cakes. When this was done, it looked like a blank canvas ready for an artwork to be applied on.
Using orange royal icing in a squeezy bottle, I began piping the paisley/mehendi design on. In the course of one lesson, my respect for the mehendi-wallahs we visited on the streets in India shot up tenfold!
I seriously never realized how hard it was to sit, hunched over, concentrating for so long on an intricate design. The end result was not perfect, but I was happy with what I had done.

My family has never been fans of rich fruit cake either, but this one was finished within a week. It must have been our teacher’s special recipe – not too rich, not too sweet, just right.
So, do me a favour. At your Christmas party, make this cake here, it will be a hit! Please don’t buy the supermarket variety in the plastic packages, because you might later find slices hidden under the bed, in the dog’s kennel or fertilizing your indoor pot plants. https://www.indianlink.com.au/food/pick-me-up-summer-starters/