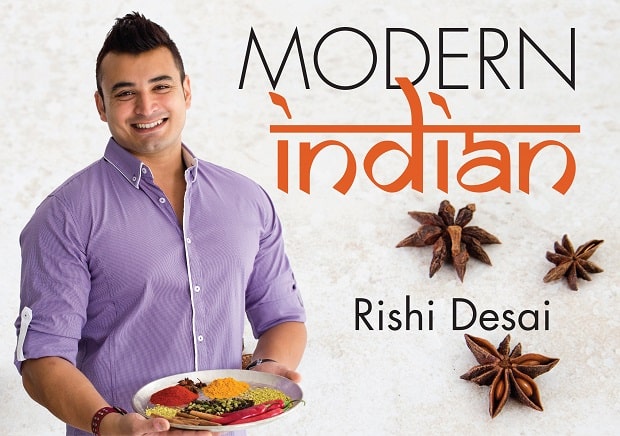 Scallop bhel, anyone? How about a tandoori spiced tuna tataki? Or a hulianna risotto if you’re vegetarian? And for dessert, would you like a chai brulee or a mango panna cotta?

This fantasy menu that combines Indian with non-Indian, sounds like a work of imagination. Sort of like the cuisine in Harry Potter’s world – you know, butter beer, pumpkin juice, ton-tongue toffee, acid pops and cauldron cakes.

New-age chef Rishi Desai’s work could well be called a work of imagination, and it does involve a bit of magic along with cooking skill!

Of course you’ll find that name familiar, especially if you’re a Masterchef tragic. Participating in the 2013 series, he endeared himself to viewers, as well as the cast, not only with his food, but also his good looks, his sense of humour, and some may say, his philosophical attitude to it all.

When he left the show, there was talk of a cookbook. Rishi’s Modern Indian is now out, and is the most unusual Indian cookbook you’ll ever find, with its fascinating fusion elements.

Vegetable sliders with okra chips. Coconut milk poached salmon. Kulfi with apple crumble. As you leaf through the book, Rishi’s recipes make you wonder, why did I not think of that?

Talking to Indian Link, Rishi clarifies that his food is “not fusion”.

“It’s essentially Indian,” he states emphatically. “There are no new flavours. It’s just that the techniques are different, and modern”.

And so Rishi presents chaat in lettuce cups, and ‘nachofies’ pappadums by serving them with a dip. How’s that for simple innovation?

“I’m a true patriot,” Rishi laughs. “Indian food is so versatile, you don’t need to confine it. Why not try modifying it to suit the times?”

His pani puri is a case in point. It’s the classiest way possible of serving this delectable street food favourite (Go grab a copy for details).

In his own recipes, Rishi brings in texture, which Indian food typically lacks. So his palak paneer becomes a tiny slab of paneer, with a curried spinach puree on top, served on baguette crisps. Great as an entrée!

“As well, I think, we tend to hide our proteins,” he notes. “I make sure they come out”.

His hulianna, similarly, is much more than the traditional tamarind rice. It is prepared with arborio rice and vegetable stock, and though the cheese is kept out to stick to the traditional, it ends up with a lot more texture.

The novelty factor in Rishi’s work increases as he tackles main meals. Steak and lamb cutlets are served with purees made from smoked eggplant, cauliflower, or caramelised onions, and in one case, even with a methi-mutter-malai sauce. Rabbit is given an Indian treatment with root vegetables. Duck breast is served on a bed of mushy kali dal. Turkey is cooked into a korma. Sev and chivda find themselves in garnish.

In desserts, Rishi’s particular version of gulab jamun is an absolute must-try. In a unique presentation, he serves it up not as balls but as discs, accompanied with orange marmalade, vanilla ice cream and pistachio praline.

Which, of all his preparations, is Rishi’s own personal favourite? He shares with us here his butter quail recipe.

“It is inspired by the famous butter chicken. I made it on the show for my immunity pin, and Gary, who we know is a big fan of Indian food, loved it”.

The Kohlapuri goat curry (from his hometown) is another favourite, even though his version is a compete re-invention of the old.

Rishi is also partial to his coconut milk salmon. “It’s my take on fish curry and rice, but it is by far the most adventurous dish I have ever attempted. The salmon is poached on a low temperature of 43 degrees. To serve, I sit it in a bowl of spiced coconut veloute, and add a dollop of caramelised onion puree on top. Wild puffed rice makes up the garnish”.

No doubt presentation of the food is paramount for this creative cook.

“Our curries may taste great, but often they don’t look appetising. Food should be presented beautifully so that you feel like eating it right away! You should enjoy food with all your senses!”

And that’s where the unmistakable Heston Blumenthal link comes in. Working with him on Masterchef has left an indelible mark on Rishi. Check out his preparation ‘Vegetable Garden’, a fancy version of crudities and dip – it’s an edible garden diorama, complete with edible soil, a work of art.

And yet, even Rishi will tell you, with some Indian preparations, there is no need whatsoever to modernise – they are perfect as they are. For example, biryani. Have a look at Shoukat Chacha’s biryani in the book.

The book itself was a long time in the making. Rishi works as a public servant in Canberra, and the book was worked on after hours.

“I worked 16 hours a day, eight hours on each job,” Rishi laughs. “The hardest part was conceptualising the recipes. The easiest part, cooking of course!”

The filming and photography was all accomplished in four days – a mammoth task as Rishi cooked 16 recipes a day.

“We worked from 6am to 6pm, as I was keen to have natural light for all my photos. Plus, I had to go to the shops each morning as I only wanted the freshest of produce”.

It was just as much work as being on Masterchef.

“The show was hard,” Rishi recalls. “The combined physical and emotional stress gets to you. But it was a great five weeks”.

What does he have to say to the commentators who claim he was the most talented chef on the series?

“All I can say is that I did make mistakes, and they cost me”.

Today he is still in touch with others from the show, even visiting them in their cities. Besides of course being out and about presenting at events such as the Truffle Festival in early July, and talking about his book Modern Indian.

A restaurant is also on the cards. Having moved here in 2008 (“the year that Masterchef began”), Rishi feels ready to take the plunge, but will not divulge details.

“The restaurant could be in Sydney, or maybe Melbourne. Or who knows, somewhere in India!”

Regardless, he will make sure that the three greatest cooking influences in his life will be proud of his efforts – his mum, his wife, and surprise surprise, Tarla Dalal, the first lady of Indian cooking.