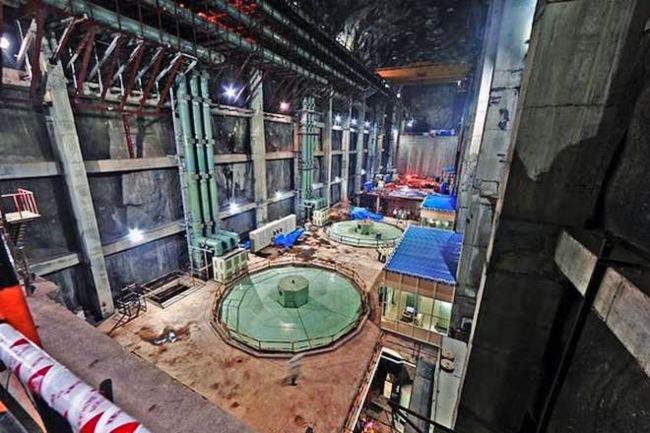 Reading Time: 2 minutesLakshmipur pump house, a key component of Kaleshwaram Lift Irrigation Project (KLIP) and claimed to be the world’s largest pump house, has successfully commenced operations in Telangana.
Megha Engineering and Infrastructures Limited (MEIL) unveiled Laximpur Underground Pumping Station (LUPS), also called as the Package 8 of the mega project across the Godavari river.
The wet run began Sunday night with switching on of the fifth machine in LUPS in Karimnagar district. With this, around 3,000 cusecs of water was lifted to a height of 111 meters into Mid-Manair reservoir through the gravity canal.
Telangana Chief Minister K. Chandrashekar Rao is expected to formally inaugurate this colossal pump house on Wednesday. The 52-minute wet run discharged 89.73 cusecs of water into the gravity canal. The volume of water pumped was 98,85,303 cubic feet, about 28 crore litres.

LUPS would enable live storage of water in reservoirs throughout the year in the Godavari river belt.
MEIL described the pump house as outstanding engineering marvel as it is the world’s largest underground pumping station constructed at 470 feet below the earth’s surface.
“This is an extraordinary underground pump house, 470 feet below the ground with twin tunnels and the largest surge pools in the world. This is an ultra-mega project in the world, having 7 motors, each having a capacity of 139 megawatts,” said B. Srinivas Reddy, Director, MEIL.

These motors can lift three TMC (Thousand Million Cubic) water per day. The gigantic motors were developed indigenously with the computational fluid dynamics (CFD) technology.
The most significant feature of KLIP is that it completed the construction of the electrical infrastructure with 3057 MWs capacity that comprises six 400KV and 220KV substations, transformers and 260 kilometres of transmission lines, 7 kilometres of 400 KV XLPE underground cable.
Billed as the world’s largest multi-stage lift irrigation project, Kaleshwaram was formally inaugurated in June.
When fully operational, the Rs 80,000 crore project will lift two thousand million cubic (TMC) feet of water per day to a height of half-a-kilometre.
It is designed to irrigate 45 lakh acres for two crops in a year, meet the drinking water requirement of 70 per cent of the state and also cater to the needs of the industry.
IANS