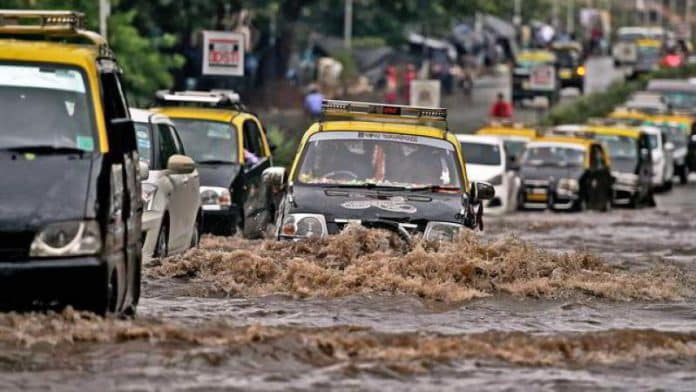 Reading Time: 3 minutesAt least five people were killed in Mumbai and Satara as rains continued to batter large parts of Maharashtra, especially the coastal Konkan region, on Sunday, hitting train services hit badly. Helicopters rescued 73 people in Thane and boats were deployed to rescue around 400 people stranded in Mumbai suburbs, officials said.
In the state capital, a woman and her son were killed due to electrocution in Santacruz.  Two people from Pune drowned in a waterfall in Satara after their vehicle hit a barricade and fell into a flooded drain at Babhalnala early on Sunday.


The Indian Air Force deployed a MI-17 helicopter to rescue 58 villagers, including 18 children, from Ju village in neigbouring Thane as they were stranded in rising floodwaters.
In another operation, 15 marooned villagers were saved by a MI-17 chopper in Buranda village of Palghar this evening.

The operations were conducted after a request by the Maharashtra government, and all the stranded people have shifted to safer locations at the Air Force Station in Thane, and another location in Palghar, said an official spokesperson.
In some villages in Pen of Raigad district, around 60 people were stuck in five-six feet deep water since 4 am on Sunday, were rescued by NDRF teams in boats and similarly, 40 saved from marooned Mori village in Palghar this afternoon.

Most schools and college in Thane, Ratnagiri, and Pune have declared a holiday on Monday in view of continuing rains.
Mumbai comes to a halt.
Thousands of outstation passengers were stranded at various stations in Mumbai, Thane, and Palghar as the train services were disrupted, while hundreds more were stuck in incoming trains that have been halted at various locations en route.
Similar chaos was witnessed on the Konkan Railway with trains getting delayed, inconveniencing thousands of passengers.
The BMC, NDRF, two columns of Indian Army, Navy and Air Force, besides all other agencies are on a high alert for any eventuality in Mumbai and Thane.
A portion of a bridge on Pinjal River in Palghar was washed away on Sunday morning, bringing traffic to a complete halt on both sides, though there are no casualties.