A toast to India

Indian community gets to mark Independence Day at the State Parliament 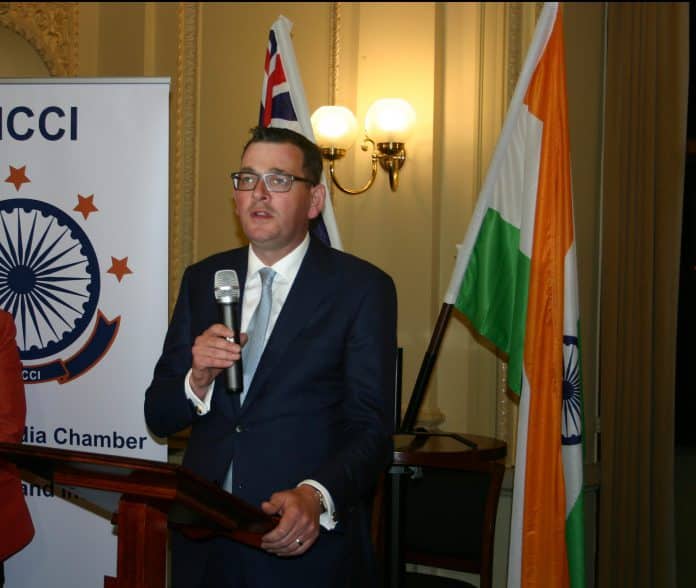 Reading Time: 3 minutesThe Indian tricolour took pride of place alongside the Australian flag inside the Victorian Parliament, recently, to commemorate India’s 72nd Independence Day.
The reception was jointly hosted by AICCI (Australia India Chamber of Commerce and Industry and AISG (Australia India Strategy Group). “Today is the day to celebrate the modern economic miracle that is the Indian nation,” said Victoria Premier Daniel Andrews addressing the select audience.
“India is the biggest democratic nation in the world, and not only in size. It’s a country that makes us proud in technology, innovation, critical thinking, science, finance and so many different areas,” said the Premier.  “Free modern India is an example for all of us and there is much for us to learn from modern India as it is for us to share with India,” he said.

The Premier and other speakers were unanimous in condemnation of the remarks that were made by Queensland Senator Fraser Anning at the Australian senate the night before. Anning caused a furore with his maiden speech after he appealed for a ban on Muslim and non-English speaking migrants and a return to a white Christian Australia. According to the Premier the senator’s words denigrated the values and contributions that have been made and continue to be made by every person in Victoria.
He praised the Indian community for its focus on family, hard work, faith and looking after those that are less fortunate. He thanked everyone for making the multiculturalism in Victoria envy of the world. “Every single Indian Victorian has a bigger heart and a more generous outlook than the terrible words that were spoken in the Senate yesterday,” said the Premier to great applause.

Craig Ondarchie MP, Member for Northern Metropolitan Region took the popularity vote with his impassioned speech praising India and Indians in Australia. Quoting cricketing legend Sachin Tendulkar he said he admired the contribution of the Indian community in multicultural Victoria because “The harder they work the luckier they get”.

He announced $5.5 million dollars to build a new Indian community centre if the Liberal Party won the upcoming elections in November. He also announced that an elected Liberal Party would make Hindi available as a language in Victorian primary schools.
The celebrations continued with more speeches, national anthems and patriotic songs. The emotional and cultural attachment to India was evident in the enthusiasm with which the guests joined in singing the popular patriotic song Ae mere pyare vatan.
Bruce Atkinson MP, President of the Legislative Council and Robin Scott, Minister for Multicultural Affairs echoed similar sentiments and praised the significant contributions made by the Indian diaspora in Melbourne. They both promised to provide an enabling environment for diaspora engagement.

Drinks and canapés did the rounds as AICCI spokesperson Ravi Bhatia kept decorum and announced the speakers for the evening. He formally introduced the committee members of AICCI and AISG and reiterated their common goal of enhancing the Indian Australian engagement through community participation, networking, trade, and business opportunities.
Diaspora organisations such as AICCI and AISG are increasingly seeking to influence government, media, corporate sector and other prominent groups by speaking up on a range of issues affecting Indians here.
They aim to ensure better integration of the Indian diaspora in Australia and to ensure respect for their rights for best outcomes.