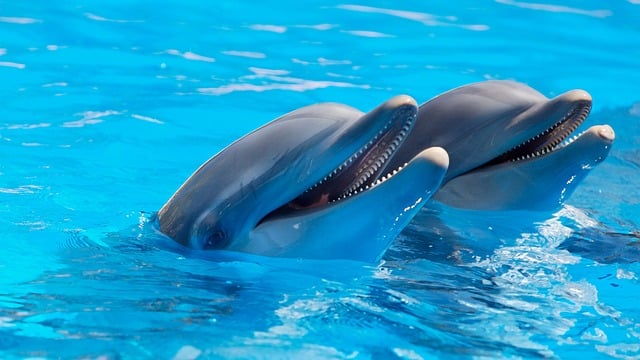 The foundation stone of India’s first dolphin research centre will be laid in Bihar on October 5, after an eight-year delay since it was first mooted, an officer confirmed.

D.K. Shukla, the senior officer from Bihar’s Department of Environment, Forest and Climate Change, said, “It was announced by Deputy Chief Minister Sushil Kumar Modi in state Assembly that Chief Minister Nitish Kumar would lay the foundation stone of the National Dolphin Research Centre (NDRC) on October 5 on the bank of river Ganga in the premises of Patna University.”
Shukla said the development was a good news for the conservation of the endangered Gangetic river dolphins in the country.
The endangered Gangetic river dolphins.
According to Gopal Sharma, a senior scientist at the Zoological Survey of India (ZSI), the population of the endangered Gangetic river dolphins was stable along nearly 1,000 km stretch of the Ganga and its two major tributaries, Gandak and Ghaghra.
More than 1,500 dolphins were spotted by three teams of experts and scientists who undertook the exercise of enumeration of the species earlier this year.
The NDRC will play an important role to strengthen conservation efforts and help in research to save the endangered mammal. Another officer of the Department said the NDRC remained stuck for over four years due to the refusal of Patna University to part with its land for it. Unhappy over the delay, Nitish Kumar threatened last year that the NDRC might be shifted to Bhagalpur. After this, the varsity finally gave its clearance.
A well reputed expert on the Gangetic river dolphins, R.K. Sinha, who is also the current Vice Chancellor of the Nalanda Open University in Patna said the NDRC will prove a boon for research and conservation of dolphin. “It will help in reserach as well as conservation of dolphins.”
The ‘Dolphin Man’, prevening dolphin poaching and accidental deaths.
Sinha, known as the ‘Dolphin Man’ for his research of the Gangetic dolphins, said the species habitat has been threatened and disturbed in the river. He said the Gangetic river dolphin is India’s national aquatic animal but frequently falls prey to poachers and sometimes killed without intention after being trapped in fishing nets and hit by machines.


The mammals are killed at an alarming rate with wildlife officials saying poachers kill them for their flesh, fat and oil.
Sinha, who was conferred the Padma Shri for his research on dolphin, said dolphin presence is the sign of a healthy river ecosystem. Dolphins prefer water that is at least 5ft to 8ft deep. They are usually found in turbulent waters, where there are enough fish for them to feed on.
Gangetic dolphins live in a zone where there is little or no current, which helps them save energy. If they sense danger, they can dive into deeper waters. The dolphins swim from the no-current zone to the edges to hunt for fish and return, Sinha added.
Blind and endangered marine fighters.
Gangetic river dolphins fall under Schedule I of the Indian Wildlife (Protection) Act, and have been declared an endangered species by the International Union for Conservation of Nature (IUCN).
The Gangetic river dolphin is one of the four freshwater dolphin species in the world. The other three are found in the Yangtze river in China, the Indus river in Pakistan and the Amazon river in South America.
The Gangetic river species – found in India, Bangladesh and Nepal – is blind and finds its way and prey in the river waters through echoes. These dolphins live by echolocation, and sound is everything to them.
They navigate, feed, escape danger, find mates, breed, and nurse babies by echolocation.
IANS
- Advertisement -
Share
WhatsApp
Facebook
Twitter
Linkedin
Previous articleICJ stays death sentence of Kulbhushan Jadhav, India hails verdict
Next articleUnited we stand: NRIs all set to tackle road accident deaths in J&K