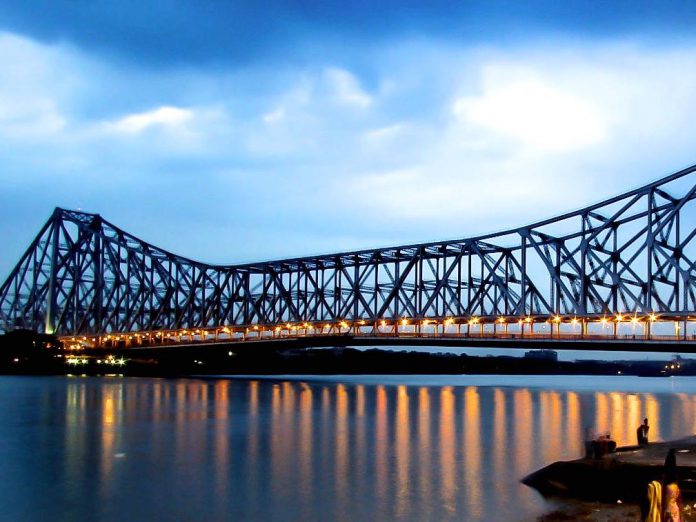 Reading Time: 4 minutesThe British-era Howrah Bridge, which serves as a crucial gateway to the city that ferries one lakh-plus vehicles and over 1.5 lakh pedestrians daily, has just turned 75.
It was on 3 February 1943, that the bridge was quietly thrown open to the public, replacing a pontoon bridge linking what was then Calcutta and Howrah.

The steel colossus – christened Rabindra Setu (in 1965) after one of Kolkata’s greatest sons, Nobel Laureate and poet Rabindranath Tagore – has become a symbol of the city over the decades, connecting the bustling eastern metropolis with the terminal Howrah station over the Hooghly river – a distributory of the mighty Ganges.
However, the beginning of the journey, of what was the world’s fourth-longest cantilever suspension at that time, was unheralded, amid the dark days of World War II.
The 26,500 tonne structure, which finds mention in Rudyard Kipling’s works, was “thrown open to the public of Calcutta, as the city was then called, in the dead of night… a tramcar rolling down from the city end to the station,” says a commemorative coffee table book Howrah Bridge: An Icon in Steel brought out by Tata Steel.
“The eerie silence upon completion was a testament to the terrifying oppressiveness of the War. The Howrah Bridge was the targeted bridge for bombing.” The Japanese attack on the United States naval base at Pearl Harbor on 7 December 1941, “weighed heavily on every mind”.
The work at the site began in October 1936, and it took around six years to make the bridge ready for traffic.

And the construction work brought together all communities. “(It was) built in an environment of religious bonhomie between Hindus, Muslims and Sikhs. There were also the Nepalis, Gurkhas and even Pathans making valiant contributions… and never was a day lost to labour trouble,” the book says.
It needed special legislation to begin with – The Howrah Bridge Act, 1926 – as the structure involved a plethora of laws to acquire land, levy taxes, employ people and ensure maintenance. The Act was replaced later with the New Howrah Bridge Act of 1935.
The bridge aroused much interest worldwide. The London-based monthly magazine The Engineer – considered the voice of authority on all matters related to engineering, technology and innovation – followed and reported every major discussion on the upcoming structure.
Rendel, Palmer and Tritton were the civil engineers, and the British company Cleveland Bridge and Engineering Company Ltd secured the contract for the whole work. The Calcutta-based Baithwaite, Burn and Jessop became the sub-contractors for the fabricated steel work.
The Tata Iron and Steel Company supplied 23,500 tonnes out of the total 26,500 tonnes of steel for the project. The remaining 3,000 tonnes were made in England.
With the completion of the bridge, where not a single nut or bolt was used, the Kolkata skyline changed forever. It is now the sixth-largest bridge of its kind in the globe.
The Engineer wrote on January 14, 1944: “It (the bridge) carries a roadway 71 feet wide and two footways, each 15 feet wide… and its central span has a length of 1500 feet.”
The Kolkata Port Trust is the custodian of the bridge that stretches for 2,150 feet and rises up to 280 feet from its foundation.

On June 24, 2005, a private cargo vessel had its funnel stuck underneath for three hours, causing Rs 15 million worth damages. Rendel, Palmer and Tritton, the original bridge consultants, were called in, and they provided matching steel used during the construction, for the repairs.
Corrosion, bird droppings and human pan (beetle leaf) mingled spit have damaged the bridge. In 2011, an inspection showed that, between 2007 and 2011, spitting had reduced the thickness of the steel hoods protecting the pillars from six millimetres to less than three millimetres.
Remedial measures were taken and regular painting done. “In 2014, Kolkata Port Trust spent Rs 6.5 million to paint 2.2 million square metres with a whopping 26,000 litres of lead-free paint.”
“Between 2013 and 2016, the average annual expenditure on engineering maintenance was Rs 2.5 crore,” said the book.
The bridge has featured in numerous films by Satyajit Ray, Ritwik Ghatak, Mrinal Sen, Raj Kapoor, Roland Joffe and Mira Nair, to name just a few. Shakti Samanta’s Hindi film Howrah Bridge, with the beautiful Madhubala in the lead, was a huge box office success.
But the obsession with the bridge has spread far beyond India’s shores.
Even Herge’s Tintin finds himself placed before the Howrah Bridge, on the Facebook page of the Belgian Embassy, without the boy detective ever having visited the city.
–IANS