Faith is over, filth remains in Prayagraj

Maha Kumbh aftermath could be a health issue, 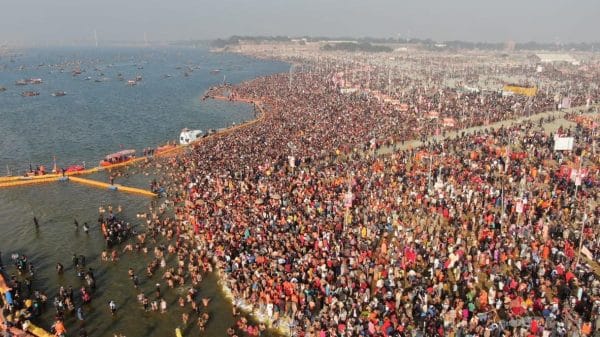 Reading Time: 3 minutesThe faith is long over, and all that remains now are mounds of filth. The Maha Kumbh that was so pompously organised by the Yogi Adityanath government from January to March this year at a cost of over Rs 4,200 crore has generated more than 2,000 tonnes of unsegregated solid waste in Prayagraj.
The event also championed the concept of ‘Swachh Bharat’ that prompted Prime Minister Narendra Modi to declare it the cleanest ever Kumbh held in Prayagraj.


According to reports coming in, the unsegregated solid waste was dumped into the city’s solid waste treatment plant at Baswar village which has been closed since September 2018. Retired judge Arun Tandon, chairperson of the supervisory committee set up by the National Green Tribunal (NGT) to review how Kumbh had affected the Ganga, has said in its report that the waste lies in the open, untreated and uncovered.
Last month, the NGT said Prayagraj was on the verge of an epidemic and must be dealt with ‘on an emergency basis’. “Dumping waste in a non-functional plant is the “grossest violation” of its order,” the NGT said.
Journalists, in general, are barred from visiting the plant at Baswar that is about 10 km from the city. A mountain of untreated solid waste stands at the site which is guarded by volunteers of Hari Bhari, a firm that has been engaged by the Allahabad Municipal Corporation to treat waste. On the rear side of the plant, a huge cavity in the boundary wall has developed, making way for the untreated waste to fall directly into the nearby Yamuna River, which finally flows into the Ganga. A worker, on condition of anonymity, admitted that the plant had not been functioning for several months. Municipal Commissioner Ujjwal Kumar, however, vehemently denies that the plant ever stopped functioning, but official letters expose facts. The supervisory committee’s report quotes a letter of the Uttar Pradesh Pollution Control Board (UPPCB) member secretary asking Hari Bhari why the plant stopped working. In its reply, the agency stated the plant was receiving 600 tonnes of waste per day (TPD) when it had been contracted to treat only 400 TPD, and was, therefore, unable to treat all the waste.

Even as this official blame game goes on, the growing waste in the plant is making life difficult for the people of Baswar and nearby Thakuripurwa, Mohabbatganj, Bungi and Simta villages. “The area is filled with stench and flies and mosquitoes buzz all through the day making life miserable,” said a local resident. Children are developing skin rashes and elders are complaining of stomach ailments.
“We are now dreading the onset of monsoon when the rains will bring waste from the plant straight into our homes,” says Naresh a local resident. Incidentally, most of the sewage treatment plants (STPs) in Prayagraj are overflowing and sending untreated sewage into the Ganga, making it unfit for even bathing. Central Pollution Control Board guidelines say that if the faecal coliform content, which comes from human excreta, is more than 2,500 million per 100 ml, it is unfit for bathing. At Sangam Ghat, the faecal coliform content in February, when the Kumbh was at its peak, was 12500 million per 100mL water, according to UP Pollution Control Board data. At Shastri Bridge, it was 10150 million per 100mL.
None of the officials contacted agreed to talk on the subject.
IANS
- Advertisement -
Share
WhatsApp
Facebook
Twitter
Linkedin
Previous articleLessons from the story of Anh Do, the ‘happiest refugee’ in Australia
Next articleIndia to respond to Australia’s White paper on trade