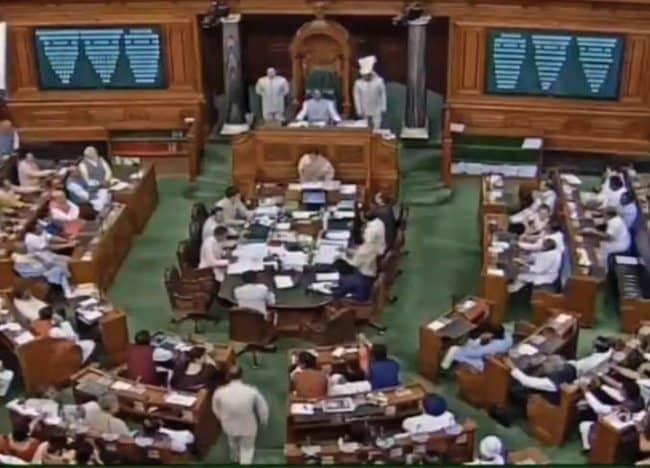 Reading Time: 2 minutesIn a historic victory for the Modi government, Parliament on Tuesday passed the Jammu and Kashmir Reorganisation Bill 2019 and approved the resolution to abrogate Constitution’s Article 370.
The Bill, which was passed by Rajya Sabha on Monday, was approved by the Lok Sabha on Tuesday. Now the legislation needs only President’s approval to for the bill to become an Act, which will bifurcate Jammu and Kashmir into two Union territories — Jammu and Kashmir with a legislature, and Ladakh without a legislature.

The Bill was passed in the Lok Sabha with over 350 members voting in its favour.
Replying to the debate on Jammu and Kashmir Reorganisation Bill, 2019 in the Lok Sabha, Home Minister Amit Shah said as Article 370 stops Jammu and Kashmir to associating with India, it should be abolished.
Shah asserted that the decision has been taken for the welfare of the Valley and said that the state is most dear to the government.
“People of the Valley are our own. We want to embrace them because they have given the maximum sacrifice and faced the maximum pain. Over 41,00 people of the state have been killed since 1989 only because of Section 370.


“What did we get from Article 370? It gave unemployment and kept far from education. It only encouraged separatism pressed by Pakistan,” he said, adding it also prevented democracy for percolating down.
Shah also assured that whatever mistakes were done by the previous governments will not be repeated.
IANS
- Advertisement -
Share
WhatsApp
Facebook
Twitter
Linkedin
Previous articleJ&K reorganisation is India's internal matter, says UAE
Next articleRemembering Sushma Swaraj: A people's politician