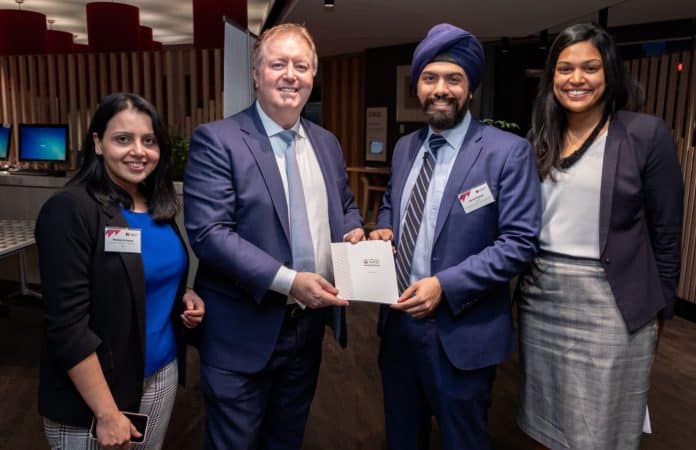 Reading Time: 4 minutesIn the current geopolitical climate – amidst a burgeoning trend towards de-globalisation – the values of diplomacy and international collaboration require fierce protection more than ever. Yet often, effective international cooperation is enabled not at the highest levels, but through backchannel, non-government diplomacy between non-state actors. The Australia India Youth Dialogue (AIYD), the pre-eminent track-two young leaders’ dialogue between the two nations, is one such organisation, whose ability to bring together the best and brightest minds – while generating tangible outcomes – was on full display at its successful 2019 strategy launch in Sydney recently.

The post-truth world flummoxes in many ways, but to Generations Y and Z, the most curious of its quirks is no doubt the rise of sweeping, insular protectionism – a trend which they have never seen in their lifetimes. After all, since the 1980s, but especially following the 1991 collapse of the Soviet Union, the modus operandi for most governments has been to follow the yellow brick road of globalisation, removing barriers to international trade and strengthening international ties. It is, in part, in recognition of the importance of these principles that AIYD and its cast of under-35s continues to foster international cooperation, bucking defiantly the apparently popular global trend.
Hosted by AIYD partner Macquarie University at its Sydney CBD campus, the 2019 launch event marked the beginning of an exciting new phase in the organisation’s history, with AIYD Chair Karan Anand announcing a renewed focus on leveraging the substantial asset that AIYD – including its distinguished network of alumni – has become since its inception in 2010, to help the organisation reach new heights and conquer new challenges.
Although Australia and India enjoy a close relationship today, it was an entirely different environment when AIYD was founded in 2011 in the aftermath of the spate of attacks on Indian students in Melbourne, one of the lowest points in bilateral ties between the nations. It’s a history that AIYD never wants to see repeated, with the organisation citing an aspirational “north star” as its vision for the relationship: that Australia and India are “globally recognised as the closest of bilateral partners, working collaboratively and equitably across a range of sectors for mutual prosperity”.
The audience – which included MPs, business executives, consulate officials and, above all, emerging leaders – heard a keynote address by Beau Leese, co-founder and co-CEO of EdTech start-up Intersective. Anointed AFR Best Young Executive of the Year in 2013, Leese’s involvement with AIYD began as a delegate to the 2017 Dialogue, which tackled a broad range of issues, including health innovation in Australia and India, the role of gender in skill development and the future of work, and a group challenge in which the winning group aimed to reduce drowning deaths by training cooperation with Australian Surf Life Saving Clubs.
It was this diversity which Leese found most compelling and rewarding in his experience as an AIYD delegate. “The cross-fertilisation of ideas, in a new context, in a new sector, was an amazing little experience,” he said.

Speaking about the 2019 strategy refresh – which he referred to as an “immense labour of love” – Anand focused particularly on the change in context between AIYD in its formative stages and its status today. “Whilst we weren’t formed to be risk mitigants, that was an important part of our DNA and fabric when we were established,” he said. “But now we fast-forward eight or nine years in the future, and those risks are well behind us. They may still exist, but that’s not the prevailing narrative of the bilateral relationship now. It’s certainly one where it’s fuelled with momentum, there’s certainly a lot of positivity, and a lot more activity happening.”
Since its inception, AIYD has amassed a formidable wealth of talent, experience and knowledge both within its ranks, as well as across its expansive network of partnerships, affiliations and friendships with a range of influential organisations and individuals in the government, educational and business sectors. In its now 200+ strong alumni community, 25% have the title CEO/Founder/Chair, eight are elected MPs and five are news anchors, while its alumni also boast two Walkley Awards, three Olympic golds and 240 one day internationals, and a collective 1.8 million Twitter followers.
With this pedigree, it’s no wonder AIYD alumni, like co-founder Sanushka Seomangal, see it not just as an opportunity – but a responsibility – to harness these capabilities to generate enhanced outcomes for the bilateral relationship.
“The 2019 dialogue will be yet another milestone for the AIYD”, she says. “A dialogue in Australia just following the release of Peter Varghese’s report to the Australian Government – India Economic Strategy to 2035, and an opportunity to further build on the relationships and collaborations between alumni, partners, including university and government partners, and other stakeholders, to continue to demonstrate the significant driver that is the AIYD in the context of the bilateral relationship”.
“The current context of the bilateral relationship is one that is ripe with opportunities, and the AIYD is best placed to leverage those opportunities to create sustainable outcomes for both countries,” she concludes.
Photos: Nikhil Anand, Pixilation Photography