Young leader of the Year 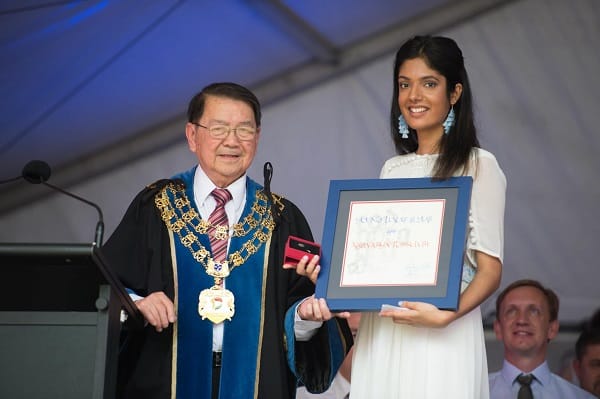 Reading Time: 2 minutes“Volunteering has helped me become more aware of my community’s needs, helping me serve it with a compassionate touch rather than in a mechanical manner,” says Aishwarya Pokkuluri who was bestowed the Young Leader of the Year award at the 2018 Greater Dandenong Australia Day ceremony.

A native of Visakhapatnam in South India, Aishwarya migrated with her family to Australia when she was five years old. She attended the John Monash Science School and her interest in the field of human health led her to complete a degree in Nutrition Science at Monash University. She developed an interest in food technology and product development, which she intends to pursue as her career.
During her second year at university, Aishwarya began to feel restless and unfulfilled, living a routine of study, part-time work and socialising. She wanted something different and more meaningful in her life.
“A friend suggested the Young Leaders program of Dandenong and I knew this would be a great platform to find my place in the volunteering world,” she says.
With the help of an extremely dedicated and resourceful mentor, Aishwarya was guided with research, project planning and delivering a project in her area of choice. Her research found that the unemployment rate for young people in Dandenong was much higher than that in other council regions in Victoria.
“I believe that volunteering is a great way to make disengaged youth feel a sense of belonging and value. The skills they develop through volunteering can help them gain paid employment,” she says.
What started as just a wish to gain soft skills soon turned into much more meaningful for Aishwarya. She realised that being involved with the community also meant becoming more aware of the issues it faces. Suddenly, there was a deep connection. “I found my service to the people change from a mechanical manner to a compassionate act, because I started seeing how my efforts were benefiting the lives of young people. It was very rewarding,” she says.
Instead of just another self-absorbed youngster, Aishwarya was able to think of the community and society at large. Her attitude towards work underwent a shift from being result-oriented to action-oriented.
Aishwarya is a part of the Sustainability Reference Committee and has also been attending Chinmaya Mission’s Yuvakendra classes, being involved in seva and taking Balvihar classes for children.
Aishwarya says she was pleasantly surprised at winning the Young Australian Leader of the Year award. She feels that the award will only provide her impetus to continue her volunteering efforts.
Along with it, she is also looking forward to start her career as a graduate food technologist.