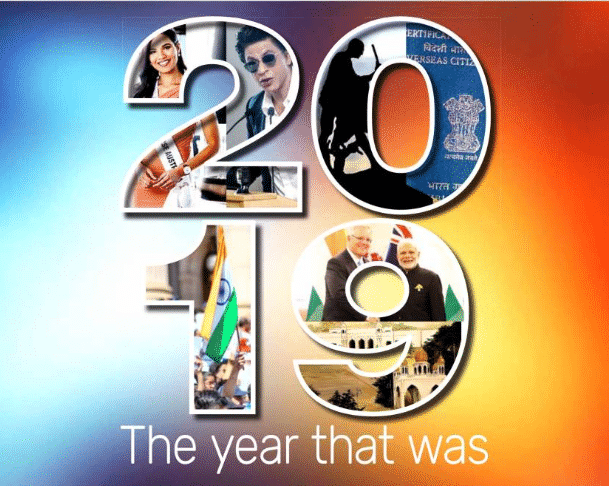 Year 2019 has been a cracker of a year.
The talking points in the community have been more like ‘shouting’ points, coming from a whole range of issues that impacted us directly and indirectly in the year 2019.
Politics has been at the top of this list, especially as we’ve had elections both at the state and federal levels, and also in our country of origin. Surprise outcomes at each only served to heighten the intensity of the discussions.
Many significant events of the year 2019 in our home country have also affected us deeply here in Australia – Pulwama, Abhinandan, a new-look Kashmir, Chandrayaan, Citizenship Amendment Act, safety for our women – some strong enough to bring us out in the streets in protest. And that itself became a point of discussion: how should the diaspora show dissent?

India-Oz
The push towards India from the mainstream went up a notch this year particularly in government efforts (the Prime Minister is set to travel to India next month), and in the universities rushing to offer scholarships to Indian students.
Business effort on the other hand, continued to show characteristic reticence, even though Peter Varghese’s report on a proposed strategy for Australia to engage economically with
India continues to be invoked regularly. (The report has inspired a similar document from the Indian side, its author Anil Wadhwa currently touring Australia.) If reports are true that
Barry O’Farrell is to be the next High Commissioner to India, it remains to be seen how the business relationship will change, given his previous roles as NSW’s Special Trade Envoy to India and on the Australia India Council.

Community achievers
In Australia Day and Queen’s Birthday Honours this year, a record number of members of our community, eighteen in total, saw themselves decorated. While the honourees were mostly from the traditional fields of medicine, academics, scientific research and community service, a welcome addition this year was a personality from the performing arts in the mainstream: the Pune-born Cyrus Meher-Homji, musicologist and record executive.
NSW and Victoria both saw Indian-origin representatives enter Parliament (Gurmesh Singh and Kaushaliya Vaghela respectively).
As year-end approaches and various industry sectors announce their annual awards of excellence, news is currently coming through of more achievers in the IT, sciences, health,
sustainability and business sectors.

The Mela scene
The Mela fatigue from last year continued this year. The large-scale Independence Day fairs were a damp squib yet again, hopefully forcing a rethink at our organisations (more so in the light of a much more successful smaller affair by the CIA). And if we lamented that Independence Day now goes on for a fortnight, Diwali – traditionally a five-day affair but not in contemporary times – went on for nearly a month this year, the last event taking place on 16 Nov, twenty days after the festival itself on 27 Oct. The Hindu Council of Australia was the major proliferator here, presenting to the community literally a festival of festivals at various locations, even though its flagship event moved to a less glamorous venue. The stage events at these day-long affairs attract fewer and fewer people, leaving one Indian Link report to conclude that the audience members for the cultural events are often families of those performing, who leave immediately after, and that the official segments have more people on stage than off it. Is it correct then to claim that the community is ‘the real winner’ at these multiple fairs?
CIA’s fresh approach to Diwali, a street fair in Harris Park, was a repeat success this year, and is our pick for Event of the Year (see box).
In terms of impact, Blacktown Council’s Diwali Lights competition also made its mark.
Adding to the Mela scene this year were two special events. GandhiAt150 was observed with some fervour here, strangely with more community involvement than back home in India. Surprisingly, the UNSW made no special commemoration, even though it has been marking the Gandhi dates 2 Oct and 30 Jan for many years now. The event at Parramatta, at the location of the Gandhi statue in Jubilee Park, created much interest with its multi-thronged homage including an exhibition, a play and a movie screening. Organised by a successful collaboration between Local Council, local business and community stakeholders, it attracted a large crowd for a Wednesday night. GuruNanakAt550 went off just as well. The Divine Steps Festival, organised as a multifaith devotional music event, paid tribute to the founder of the Sikh faith also with art, langar and seva, including a fundraising bike ride from Canberra to Sydney. The active involvement of the youth in the organisation as well
as in attendance, was particularly commendable.
It was the smaller, niche events, put together by grassroots efforts rather than the larger organisations, that won the day.

Community trends
The Government of India’s changes to the OCI card caused some chaos as travellers were prevented from travel at check-in. The confusion continued as clear-cut information was not immediately available, forcing harried travellers to take emergency visitors’ visas.
Domestic and family violence continued to be on the agenda, especially with the horrific murder of dentist Preeti Reddy, allegedly at the hands of a former partner.
Meanwhile, health concerns took their place on the agenda: showing increased impact, community health initiative Pink Sari took on a new campaign, this time against bowel cancer. In another trend, families with special needs members are also beginning to associate and advocate collectively for services.
Seniors’ issues, particularly elder abuse, dementia and the need for culture-specific retirement facilities, are also claiming the spotlight and will step up in the near future.
In education, a commendable trend is the increased take up of Indian languages at our schools. (We’ve had more reports in Indian Link this year than ever before, of Indian-themed celebrations at our public schools, focusing on Holi, Diwali and Gandhi.)
The restaurant scene saw interesting trends: while leading eateries Manjit’s at the Wharf and Urban Tadka held sway for their five-star dining experiences as well as their strengths in outdoor catering, ‘eat street’ in Harris Park saw the crowds throng in, especially for its community-friendly casual late-night vibe.

The arts
Regarding the performing arts, while the theatre scene has grown with increased participants, perhaps the same cannot be said in terms of impact. Instead, the dance scene seems to have picked up, with some stellar presentations this year (Hamsa Venkat’s Abhigyanam Shakuntalam, Swastik Dance’s Taj Mahal). What has impressed most though, has been the flashes of brilliance in mainstream entertainment, with young Indian origin creatives paving the way (Kavitha Anandasivam of SBS TV’s The Hunting; twins Ved and Vrund Rao and writer Mithila Gupta in ABC Me’s The Unlisted; musicians Harts and L-FRESH The Lion; Priya Serrao as Miss Australia).
In film, good to see some great samples of ‘thinking’ Hindi films felicitated in the mainstream here. Manoj Bajpayee claimed his second APSA for Bhonsle, and the critically acclaimed Andhadhun and Gully Boy scored AACTA nominations for Best Asian Film.

Celebrity visitors
Shah Rukh Khan led the celebs at the Indian Film Festival of Melbourne this year, seducing the audiences at multiple appearances such as at the opening, at LaTrobe University and in the mainstream media. Needless to say, social media was “Shah-struck”. As expected, other invitees paled somewhat in the background, with the possible exception of Tabu, Karan Johar, Malaika Arora and Vijay Sethupathi.
The Indian cricket team brought much cheer for the fans early in the year, with their historic 2-1 test series victory.
From the business world, Satya Nadella and Indra Nooyi were high-profile visitors. Writer William Dalrymple dropped in on the way to JLF at Adelaide, paying us a visit at Indian Link.
Other highlights included singers Sonu Nigam, Shankar-Ehsaan-Loy and KK, and actors Deepti Naval and Kareena Kapoor in successful small-scale events.

Taking stock of these highlights, it’s clear that in 2019 the community was abuzz with activities of interest and causes to speak up for. As we start a whole new decade in a few weeks’ time, here’s hoping we can give better direction to the trends that will see us evolve better as a community, and take back to the drawing board that which warrants a closer look.