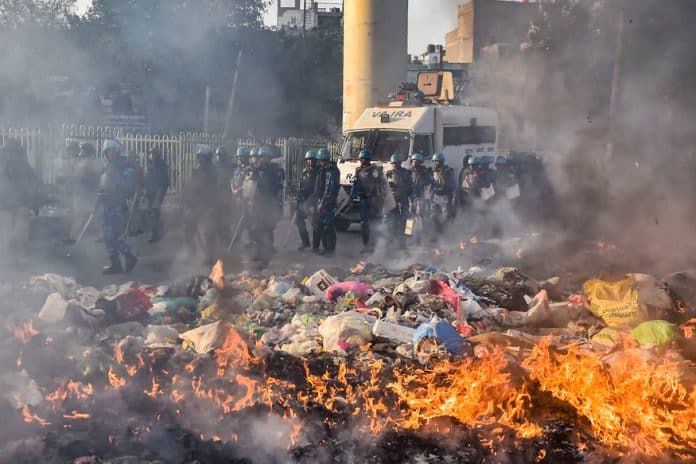 The three days of violence in several areas of the northeast Delhi that left 27 people dead and over 200 injured, were some of the deadliest in the national capital, almost 28 years after the demolition of Babri Mosque in Ayodhya.
On Sunday 23 Feb, northeast Delhi residents woke up to sporadic violence and as the day progressed it turned nastier engulfing many areas, claiming lives and injuring several.
For Hindu and Muslim residents of Seelampur, Jafarabad, Chand Bagh, Shiv Puri, Karawal Nagar, Joharpuri, Maujpur and Kardampuri, it strained the social fabric and destroyed the harmony established by the people of different communities living there after the riots in the aftermath of demolition of the Babri mosque in 1992.

The violence stemmed from the growing friction among pro and anti new citizenship law CAA and the National Register of Citizens (NRC) activists and between supporters and opponents of the Narendra Modi-led government.
The impact of the three days of clashes was quite visible on the streets that were littered with stones, bricks, shattered glasses, burnt vehicles, and razed shops and houses by its sides on Wednesday 26 Feb.
However, all was not lost in the hatred spewed by some and violence perpetrated by some others.The unity among communities was reflected in their efforts to keep miscreants away by coming out to each other’s security. In the Chand Bagh area, despite the incidents of stone pelting and lobbing of petrol bombs by mobs, the locals bonded together to save the Durga temple and the Jama Masjid that stand face to face.
Shahe Muwazzam Ali, a Chand Bagh resident told this reporter, “We (Hindus and Muslims) have been living together peacefully for almost three decades in the area and have built an inter-dependent social living. How could we allow a mob to rip it apart.”
Kalama Ahmed Khan, a Chand Bagh resident, pointed to signboards, saying, “You can see the buildings here have names of Hindus as well as Muslims. By standing united and forming a human chain, we prevented the mob from attacking the religious places. Both Hindus and Muslims stood like a wall and didn’t allow them in the area.”
While the temple and the mosque remained protected from any harm, the miscreants went on rampage and torched shops and other establishments facing the road, and a petrol pump and several houses on the other side of the road that in Bhajanpura.
Vijay Singh, whose liquefied petroleum gas (PLG) agency razed, said a 3,000-strong mob attacked the showrooms and shops on Sunday evening. “We heard the noise and provocative slogans being raised by it. We shuttered the showroom, went upstairs and locked ourselves there,” he said.
The story in Maujpur and Jafarabad was no different where mobs of miscreants roamed the streets with iron rods, hockey sticks and other implements trying to rip the social fabric and disturb the communal harmony.
After three days of horror, normalcy started limping back in the Kanda Market area of Maujpur.
Speaking to media, a local resident said, “A few shops have reopened on Wednesday. But the people are scared amid rumours making the rounds.” His fear was apparent when he refused to disclose his name.
However, the locals could be seen interacting and enquiring about acquaintances and the situation in the neighbouring areas.
Rahul Tyagi, a Maujpur resident, said, “We are living here together for a long time. We stood by each other’s side and prevented miscreants from making serious damages in the inner parts of the area.”
To restore normalcy, Hindus and Muslims in the Brij Puri area took out a peace march raising slogans ‘Hindu Muslim bhai bhai’, challenging vested interests to dare damage the social fabric marked by trust and harmony and woven with patience and respect towards all.

By 26 Feb, an unpredictable calm had descended.

Commissioner of Police Amulya Patnaik, who is set to demit office by this month-end, said there were adequate numbers of police personnel deployed, but people strongly doubt his claim. Sources said many calls were made to the police control room headed by IPS officer Muktesh Chander in the last two days, but only some were attended. The figures of distress calls would never be made public as per Patnaik’s directions, the sources said.
Parts of north-east Delhi became completely inaccessible for the police personnel and people were left to fend for themselves. “We kept on calling the police control room, but no one came. Our shops were burnt down and houses were attacked,” said Amarjeet Paswan in Karawal Nagar. Adiya, who lives in Kardampuri, said, “Petrol bombs were thrown at our houses. We called up the police control room, but there was no response.”

Almost everywhere in north-east Delhi, tension is palpable as burnt buses, cars, scooters, bikes and auto rickshaws are scattered on the road. Every third shop on the main road is either robbed or burnt. “It was complete mayhem,” said Suresh, a resident of Bhajanpura.
Bricks and stones used by rioters have turned roads into battle zones.
The government has put the death toll at 24, but it is set to rise. An intelligence Bureau official was found dead and his body was recovered on Wednesday from a drain in Chand Bagh area.
Sources said Ankit Sharma, the IB official, was severely beaten and then thrown into the drain. The government’s figure of around 200 people injured, too, will go up substantially with hospital authorities claiming that many injured people have left for treatment at private hospitals. Many houses are still smouldering as fire brigade could not reach the places to douse the flames. “We were not allowed by the police due to safety reasons at various places,” said a fireman at Joharpuri.
At many places, fire brigade and police personnel refused to entre the lanes where people were armed and ready to attack on the police force. At Joharpuri and Karawal Nagar, Special Commissioner of Police S.N. Srivastav, who has been tasked with controlling the situation, found that people armed with bricks were sitting on the rooftops after which he issued direction to his men to disarm them and catch the perpetrators.
“If someone says the situation is under control, he or she is lying,” said a senior police officer who was at Maujpur, waiting for National Security Advior Ajit Doval to peacefully cross the troubled area.