When worlds collide: History through art

Check out Ellora Srivastava in this year’s Art Express, currently on at the Art Gallery of NSW 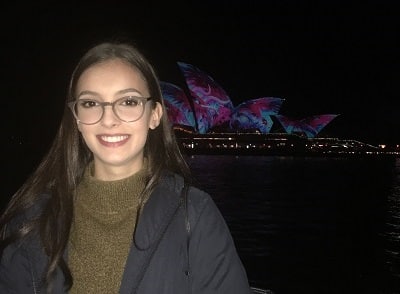 Reading Time: 3 minutesIn a cosy family scene from colonial India, the patriarch’s head is morphed into that of Ganesha. It’s almost as if Lord Shiva had performed his fabled head transplant surgery here, in order to create a figurehead of wisdom and tolerance.
In another piece, a romantic interlude featuring a European couple is disturbed by the dream-like advent of warriors Krishna and Arjuna, in full battle mode.

The two art works In the Presence of Krishna and Immigrants from India, are part of a ten-piece collection created by student-artist Ellora Srivastava, called Karmic Colonialism. The work is currently on display at the Art Gallery of NSW, in the prestigious ArtExpress 2018 exhibition that showcases the best from Visual Arts HSC students across the state.
“I was quite surprised to be selected for ArtExpress,” the Gosford High School student told Indian Link. “I’m still quite shocked to think that people might be interested in what I have to say.”
Studying New Australian artists such as Kate Beynon and Guan Wei and seeing their work influenced by their migrant backgrounds, Ellora’s own Indian heritage became fertile ground for her Visual Arts Major Work.
She was surprised to learn that India was colonised not only by the British but also by the Dutch, the Portuguese and the French, each of who left their own stamp on the cultural fabric of the nation.
“I picked an artwork from each of these colonising countries, and then reappropriated them using the traditional Indian practice of miniature painting, as well as the contemporary techniques of Photoshop and digital collage.”

She wrote in her artist’s statement: “My work is an amalgamation of Indian and European art styles through a historical lens – a powerful illustration of the way art can communicate the pillage of culture by colonial powers.”
The final product includes landscape as well as portraiture, with the Indian subtext coming from mythology and miniature paintings – and from the comic book genre that Ellora’s parents’ generation will know of as Amar Chitra Katha.
“Growing up, my home was filled with old copies of the Indian comic books – of which Hanuman was my favourite,” Ellora recalled. “For the miniatures, I found brushes with the finest hair possible to make the finest possible strokes – it was quite difficult.”
The project, she took pains to stress, was essentially about technique: the viewers are free to make their own observations about the subtexts within.
In Karmic Colonialism, you’ll find hunting scenes, royal processions and mythological warriors blend seamlessly with European art of everyday work and family scenes that were probably intended as mementos and souvenirs for friends and family back in Europe.
And so Thomas Gainsborough’s 1750 painting Mr and Mrs Andrews became Mr and Mrs Kapoor.

And Krishna and Arjuna became Immigrants from India.
And Colonel Blair in Johann Zoffany’s 1786 painting Colonel Blair with his Family and an Indian Ayah got his Ganesha head.
Was Ellora aware that at about the time she was creating this particular piece, an ad for lamb featuring the much-loved elephant-headed god was causing a furore among Indian Australians?
“No I wasn’t,” she admitted. “I remember vaguely thinking that my work might be seen as offensive, but quickly put the thought out of my head.”
Yet there was much that young Ellora learnt about her Indian roots through this entire process.
“I learnt a whole lot not only about colonisation but also about the history of Indian art, and the history of photography in India,” she said.

Read how Manan Luthra made it to OnSTAGE here.