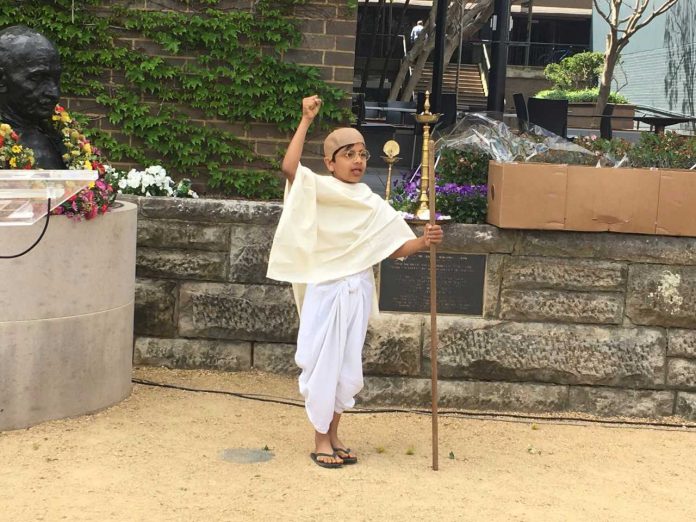 “Gandhiji used to walk very fast,” says Vatsal Dave, 8.
He should know – he played the role of Gandhiji at a recent re-enactment of the famous Salt March.
As he speed-walked across the lawn in his Gandhi costume – holding his rustic walking stick and his white chadar flying behind him like Superman’s cape – he channelled the Mahatma brilliantly for the dozens of marchers behind him.

The re-enactment was part of a Gandhi memorial held on 2 October at UNSW.
Way back in 1930, Gandhiji took 24 days to walk 400 km from his home in Ahmedabad to a coastal village called Dandi. He walked to wilfully break the “Salt Law” imposed by the British, which prevented Indians from producing their own salt. Thousands joined him along the way in defiance against the British.
Gandhi urged his followers not to retaliate against the waiting brutality, and the aftermath is well known.
The incident garnered the attention of the world, and became the changing point in India’s freedom struggle. Gandhi had finally managed to develop a strategy against the British – using nonviolent protest and civil disobedience.
In its brief Sydney re-enactment, Vatsal Dave as the young Gandhi not only walked the walk but also talked the talk.

“Even those as powerless as a grain of salt can make a difference,” he paraphrased the Mahatma.
It was a poignant reminder of a spirit that moved a nation.
The University has been organising the memorial on the occasion of the birth anniversary of the most well-known Indian, for a few years now.
Led by Neville Roach AO, of the Australia India Institute arm of the university, the ceremony involves garlanding of the bust of Gandhiji that sits on the Library Lawn.
At this year’s event, Roach joined the Pro-Vice Chancellor of UNSW Laurie Pearcey and the Consul General of India in Sydney B Vanlalvawna in paying the floral tribute.

Meherlyn A Jussawalla, the university’s Director of Diplomatic and Network Relations, organised the event and took special pains with the garlands: they included Australian elements as well as the university’s branding colour, yellow.
In his reflection, Roach described the story behind how the bust came to be at UNSW. “It was a gift from the Government of India in recognition of the university’s work to enhance Australia-India relations,” he recounted. The first ever statue on the campus of the university, it provides a welcoming environment not only to its many Indian students, but to others in search of a few moments of quiet and contemplation, he added.
The Pro-Vice Chancellor, Laurie Pearcey, in his address agreed that the statue was “a symbol of hope to our students.”
Reprising the Mahatma’s philosophy that education is the key to changing attitudes, he spoke of the relationship the university has forged with India in terms of research and other partnerships. Some 700 students from India are currently enrolled at the university, he added. He also spoke of the weeklong India Illuminated event that the university will soon be organising as part of its India strategy.
Some of Gandhiji’s favourite hymns were presented on the occasion, including RaghupatiRaghav by Aradhan Bhatt, Hari Tumharo by Dr Usha Sridhar, Lead Kindly Light by a sari-clad Heather Lee, and the Bengali folk song Ekla Chalo Re by Prof Srikanto Bandopadhyaya.
In his concluding comments, Roach urged attendees to return next year with non-Indian friends, to expose them to the legacy of Gandhi.
He can rest assured he is doing his bit for the younger members of the community – like the young students at Mala Mehta’s IABBV Hindi School.
“I learnt how to walk like Gandhiji by watching his videos this week,” Vatsal, the young Gandhi, revealed. “My mum told me he was a fast walker. She has been telling me about Gandhiji since I was in kindergarten. Now I know his full name and I know about his Salt March – I watched him pick up the salt with his hands.”
What else does he know about Gandhiji?
“Nonviolence. Gandhiji said we should use words instead of fighting.”
Perhaps there’s a lesson there in his innocent words. As he walked the UNSW lawn in his avatar of the apostle of peace on 2 October, in another part of the world, a horrific violent event in Las Vegas was about to unfold.