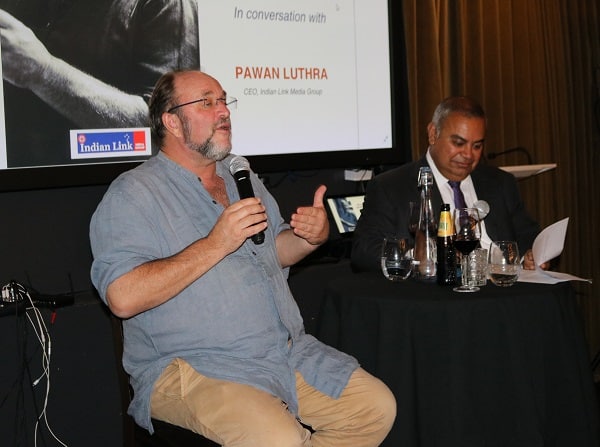 Pawan Luthra: William, take us back to 1599, and paint us a picture of how the East India Company came into being, and how over a period of time the aims of this private company changed.

William Dalrymple: In 1599, Shakespeare’s writing Hamlet somewhere just downriver from the Globe Theatre. At the same time, we had a classic Tudor entrepreneur called Customer Smythe.

Customer, because he’d been for the last ten years in charge of the London Customs and made a fortune out of that. He then made another fortune by founding something called the Levant Company, a group of 30 very rich merchants and ship-owners who pooled their capital and started buying spices from Aleppo, Cairo and Venice. And they did very well for about 10 – 15 years.

And then in 1595-96, their whole business model was put to nothing by the fact that the Dutch realised that you can just sail around the cape and go to what we would now call Indonesia, particularly the Island of Run, and buy all the stuff at a fraction of the price, cutting out the Arab middlemen. And so Smythe appeals to the patriotic spirit of the businessmen of Elizabethan London and calls upon them to try out a new business model that had only been tried out three times before.

It’s something that’s very obvious to us today and probably affects almost everyone in this room in one way or another, but which was a new invention at the time.

So as well as the big shipowners putting in a thousand pounds, five hundred pounds and so on, you have small London businessmen who contributed five pounds, 10 pounds, 15 pounds. And they didn’t expect to be consulted about whether a voyage will take place or not.

They just knew that they will get a share of the profits if it’s successful. And this is a new invention. Today we take a corporation, the joint-stock model, for granted, but this was a new invention of this period. They set sail to Indonesia. It doesn’t initially look like it is going to be a great success because they’ve just got as far as Dover when the wind dies down and there’s this strange summer calm and the expedition just sits bobbing off the White Cliffs for a month and everyone comes and laughs at them.

They eventually make it to the Island of Run, and there they see a Portuguese ship coming in the opposite direction. As they’re all ex-pirates, they just board the Portuguese ship, transfer the contents into their hold, and sail back to London, where they sell the contents for one million pounds. And that’s enough to make all their fortunes. It does literally begin as an entirely piratical exercise, they make no bones about this.

A lot of the seamen who had invested and who actually staffed these ships had been with Drake and Raleigh, Pirates of the Caribbean, think Jack Sparrow, it’s this sort of world.

Initially, they are always one step behind the Dutch. The Dutch have already been there. They’ve got better financial instruments. They can raise more money, they’ve got bigger ships. And in 1630, they actually beat the English out of the East Indies, which means Java, Indonesia.

There’s this famous face-saving treaty whereby the English hand over to the Dutch, the Island of Run, which is then considered to be the most valuable property in the world, where all the nutmeg comes from. And as a face-saving device, the British get given a muddy island in the Hudson River called Manhattan, which, of course, isn’t a bad investment in the long run. But at the time, it’s considered rather a humiliation and by default, the English fall back on the textile trade, the second-best option.

And that turns out to be their lucky break, because this is just the moment when the Mughals are rising up, with the same eye for aesthetic beauty which informs the Taj Mahal and those incredible textiles that we see in the miniatures.

Their work genuinely changes the nature of textile design and makes these textiles incredibly beautiful objects that everyone in any culture, whether Mexican, Frenchman, Dutchman, Chinaman or in the East Indies, wants to buy. And the East India Company rises up, on the back of the Mughal Empire. It’s only in the 1750s that the whole thing changes gear and turns from an empire of business, into the business of empire.