Why we love the Harbour city 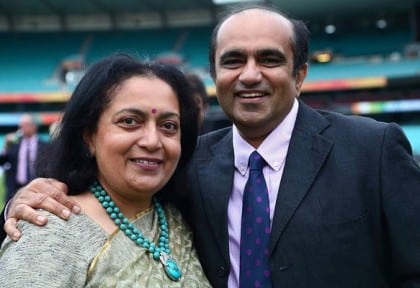 Sydney is a state of being for Darshak Mehta OAM and Alpoo Mehta, and for several incredibly good reasons

Home in India is in:
Darshak: The second greatest city in the world. If you don’t know it, stop reading this, NOW. It is not a tidy town but it is where I grew up in extreme privilege and where I am most comfortable.
Alpoo: Amaroo Boombai.
In our early days here we lived in:
Darshak: Kirribilli. We could have fallen into the harbour from our balcony. We hated the noise of visiting submarines and the fog-horns of the luxury cruise liners in the harbour.
Alpoo: Now we live in Beauty Point, Mosman. It is snobbish beyond belief and for no good reason, either!
My favourite scenic spot in Sydney is:
Darshak: The fairway of the 5th hole at NSW Golf Club, La Perouse. To die for! If I have to explain, forgettabouttit. Go, google it!
Alpoo: Awaba Street, Mosman leading down to Balmoral Esplanade. It captures the essence of our harbour city. Some beautiful homes with a gorgeous vista and stunning water views. Simply exhilarating walking or driving down. Views to New Zealand – and once in a decade you can get really lucky and see the odd frolicking whale!

A Sydney spot that has a special place in my heart:
Darshak: The Dressing Rooms of the Sydney Cricket Ground. Sacred. I think of the legendary cricketers who have been here and am in absolute awe.
Alpoo: The spectacular walk along the foreshore at the Botanical Gardens. Seems only like yesterday when we were pushing our daughter’s pram there – 28 years ago!
Favourite beach:
Darshak: Don’t need a tan, but, Balmoral, where else?
Alpoo: Both Bondi and Manly have a great buzz and are terrific to walk along.

My favourite place to eat out:
Darshak: Lal Qila in Surry Hills for Indian, and non-Indian is Icebergs, Bondi. I live to eat and it is becoming increasingly obvious!
Alpoo: Dish in Double Bay. Stylish but casual. And sensational gelato.
My favourite bar:
Darshak: Chez Mehta. I am afflicted by a truly sickening, compulsive disease: collecting wine. I am seriously into wine-porn.
Alpoo: Not into grog but love the stickies (dessert wines) at home!
Favourite theatre spot:
Darshak: The Opera House, of course. We all tend to take our own cities for granted and don’t patronise it as much as we should.
Alpoo: Sydney Theatre Company at Walsh Bay.

Favourite ‘other’ activities:
Darshak: Keen golfer (with a shocking handicap, sadly!) Drive miles to play with my mates at Asquith. A life-long victim of cricket.
Alpoo: Gardening, reading and movies. Every June we take in over 35 movies in under a fortnight, at the Sydney Film Festival. In therapy the rest of the year.
The Sydney spots I always take my overseas guests to:
Darshak: The Gap. They gasp.
Alpoo: Bondi Beach, because everyone who comes to Sydney wants to visit it.
The one thing I would change about Sydney:
Darshak: Put up some frickin’ street signs all over the place. It is a fair-dinkum disgrace. And, don’t even get me started on rude, inconsiderate drivers.
Alpoo: Can someone please, please re-introduce direct flights to Bombay?

What I do for a crust:
Darshak: Stand in the dole queue (I trade on the financial markets!)
Alpoo: I make the crust, the cake, the pasta, the roti and avert food riots. No fussier or more demanding “foodies” than my family. Just my luck…
Where would I travel miles for?
Darshak: Cabramatta for sugarcane juice and vegetarian, Vietnamese cuisine.
Alpoo: Floriade in Canberra and Tulip Time in Bowral. Unfortunately, my husband is a green philistine and does not willingly come along.
My pet peeve:
Darshak: We are becoming an unbelievably bureaucratic, highly over-governed, nanny state and are slothfully indifferent to that.
Alpoo: When are we becoming a republic with a distinctive flag of our own?

What gives me a great buzz…
Darshak: Being able to make a difference to the lives of over 2300 young people in eight countries (including India) through The LBW Trust (www.lbwtrust.com.au), a NGO that I have had the privilege of being Founder-Chairman, for over nine years and am now “President” – without the White House. I have met some terrific, inspiring people along the way.
Alpoo: Creating mosaic art. It is painstaking and addictive, but fulfilling!