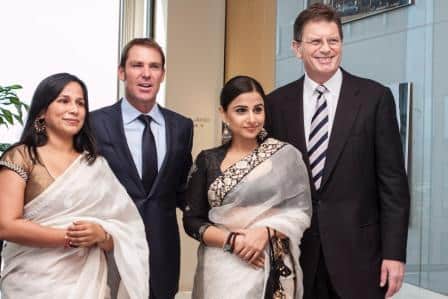 Reading Time: 6 minutesVersatile, vivacious Vidya was in the city to launch the upcoming Film Festival of India. PREETI JABBAL reports

What we’ve got is a woman’s power

In what you want and what you do

It’s the strength of a woman.

These lyrics from Gerri Halliwell’s chartbuster Strength of a Woman were racing through my mind as I waited to meet the actress who has been of late proclaimed as the ‘Fourth Khan’ or ‘the female Big B’ of the Indian film industry. Year 2011-12 has certainly been big for Vidya Balan, who continues to reap the rewards for her stellar performances in movies like The Dirty Picture and Kahani. In essaying the roles of the seductive ‘Silk’ and the hapless ‘Vidya Bagchi’, Vidya not only made a strong talent statement, but she set a trend for women-oriented films where heroines are not just chosen for decorative purposes.

“It’s nice to hear that people think I am a superstar,” said Vidya, gracefully adjusting her elegant Sabyasachi sari. Taking a moment to think she continued, “I think I have got a lot busier. There is hardly much time to breathe, but I am enjoying every moment. The fact that The Dirty Picture and Kahani have received critical and commercial success is really a validation of my beliefs and I am most grateful for that. I am completely humbled by all the love and acclaim that has come my way.”

Winner of the National Film Award for Best Actress, five Filmfare awards as well as three consecutive Screen Awards for Best Actress, Vidya is a feted actress in India and offers for endorsements, causes, charities come in by the spade-full. So what made her accept the opportunity to become the brand ambassador for the Film Festival of India in Melbourne?

“When I came to Melbourne last year I received such a warm welcome that I decided I would be back soon,” she said. “I am honoured to be the Festival Ambassador this year. This festival offers a diverse choice of cinema not only from India but also from neighbouring countries like Nepal, Bangladesh, Pakistan and Sri Lanka. Indian cinema reaches across many genres and many styles and it would make me proud to introduce this incredible industry to Australian film lovers”.

It was easy to warm up to the articulate and media savvy Vidya. Looking slimmer than last year, she was still glowing with the effect of the success that is currently her travelling companion.

“I am a greedy actress,” said Vidya. “I would love to do a role in any country, including Australia. It will give me an opportunity to work on the Australian accent that I find quite interesting”.

“My only condition,” she added jokingly, “is that the film has to be shown in Melbourne and they may want to give me an honorary citizenship as well”.

During her last visit to Melbourne, Vidya had waxed lyrical of her affection for Melbourne and its people. This year too she expressed similar sentiments.

This time there was no pausing to think and her response was quick. “I love Melbourne because I think it is modern; however it has retained an old world charm. It is not cold like other countries that I have visited. There is a certain warmth and romance about Melbourne and it reminds me to some extent of Kolkata. It could be because both cities have trams. I hope to get some time from my hectic schedule to take a ride on Melbourne’s famous tram”.

Despite not seeing much of Melbourne on her last trip, Vidya found the people so warm and welcoming that she was happy to return.

“I remember my trip to MCG last year. People in India loved photos of my visit to the mecca of world sports,” she said.

Even though Vidya is not a sports buff and confesses to possessing limited knowledge of footy, she was happy to visit the MCG again this year to present the ball to the umpire at the Richmond Tigers versus Sydney Swans match.  “Honestly I don’t really know much about footy, but where else would I get to see so many hot men in the same place at the same time,” said Vidya with a tongue-in-cheek grin.

Speaking of eye candy, the versatile actress confessed that she always wanted to meet Australian actor Hugh Jackman, who she claims is quite ‘hot’. Her wish came true when Hugh visited India for a FICCI conference and she met him at an awards ceremony there. She even got to perform a little dance jig with Hugh and Shahrukh Khan on stage.

“It was a memorable event for me and hopefully for them,” Vidya good-humouredly quipped.

Vidya who turned 34 recently, has admitted to dating UTV head honcho Siddharth Roy Kapoor, whom she sometimes refers to as ‘SRK’. Wedding bells however, are not to be heard in the near future, as VB wants to focus on the trajectory of her career. And even though she loves Melbourne and thinks of it as a romantic place, she was hesitant to commit that she would choose this city for her honeymoon. “I haven’t really thought about where I would like to go for my honeymoon,” she said with a smile.

Vidya Balan made her debut in the Bengali film, Bhalo Theko (2003), in a role which was much appreciated. She then made her debut in Bollywood in Parineeta (2006) and excelled in her role, winning the Award for Best Female Debutant. She appeared in the blockbuster Lage Raho Munna Bhai (2006). In 2007, she acted in Mani Ratnam’s Guru as a girl suffering from multiple sclerosis, and in Salaam-e-Ishq, Eklavya: The Royal Guard, Heyy Babyy and Bhool Bhulaiyaa. All these films proved her versatility and her defiance to not fit into the glam doll mould of Bollywood actresses. Vidya then played the role of a young, independent, single mother struggling with her son’s progeria syndrome in Paa (2009). Her portrayal of the role stood apart from the usual Bollywood ‘ma’ roles and got her rave reviews from critics as well as the audience. True to her spirit of doing something different, Vidya then acted in Ishqiya (2010) and won accolades for the portrayal of the seductive widow.

Not only are her roles unconventional, so are her endorsements. Vidya has very recently agreed to become the Sanitation Ambassador for an Indian Government project called Nirmal Bharat Abhiyaan. The programme is aimed at spreading awareness about sanitation and cleanliness in the country. VB has agreed to campaign for two years, and will be involved in this restructured version of the Total Sanitation Campaign. I was curious to know how she agreed to the not-so-glamourous or conventionally safe cause that involved propagating hygiene and opposing open defecation.

“I got a call from the Rural Development Minister Jairam Ramesh to ask if I was interested. We get offers to espouse a lot of causes and I like to limit myself to something that I believe in,” explained Vidya. “I am a cleanliness freak myself and I know I will be able to push this cause strongly and genuinely. Sanitation in India is the need of the hour. Look at the infant mortality rates, they are shocking. The mortality rate is often affected by lack of sanitation.  It also impacts on other areas of life. There are still schools in India that do not have toilets. We will be working at various levels and very basic levels not just through ads, but also by visiting several places. It will involve a time commitment, but I strongly believe that the sanitation campaign needs to become a national obsession,” she added

I am not sure about the future of this campaign but Vidya Balan is currently enjoying a fair bit of international attention, judging by the turnout at the opening of her movie The Dirty Picture at Hoyts Melbourne recently. Fans from Pakistan, Sri Lanka, Fiji, Australia, Britain, Canada and India were present to experience the VB charm in person. And charming she was as she chatted, joked, autographed and photographed with her fans briefly, before being whisked away to another assignment. The fans were left to watch The Dirty Picture of a clean, candid and conscientious actress.