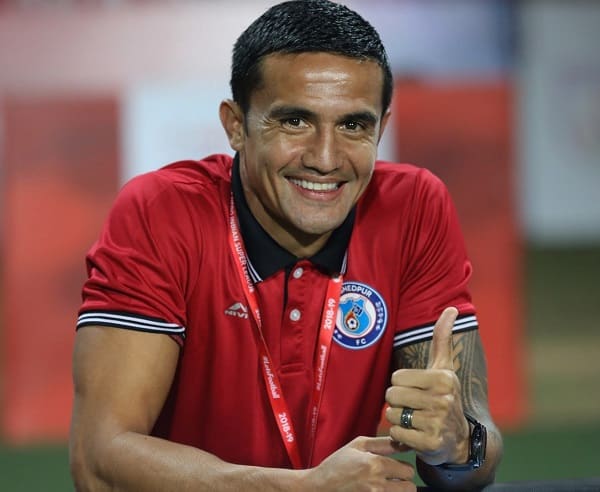 Coming to Australia as an international student from Jamshedpur in India, and to Sydney in particular, has been a dream come true. Besides the fact that I get to study at the Western Sydney University, it’s also the hometown of my childhood football hero Tim Cahill.

As a football aficionado, I would spend days and nights playing FIFA and PES. Cahill was the star-rated player with whom I started off my Ultimate Team in the game. As a Tendulkar equivalent for me, I would closely follow his games when he was at Everton, and as a Socceroo. (Who can forget his screamer against Netherlands in the 2014 World Cup).

Imagine my ecstasy when I heard that my favourite soccer player had been signed on by my own home club – Jamshedpur Football Club. Back in the day when I would use his character to score goals in FIFA, I had never imagined that I would ever get to see him up so close. Or get to know him in person, as I did during my stint as an in-house photographer with Jamshedpur FC.

Jamshedpur FC is the newest entrant in the Indian Super League, launched in 2017 by Tata Steel. Based in Jamshedpur in the state of Jharkhand, it is the first football club in the Indian Super League to have its own training centre and player accommodation facilities, known as “Flatlets”, and its own stadium, JRD Tata Sports Complex, popularly known as “The Furnace”.

The news of Cahill’s arrival was greeted ecstatically by players, staff and fans of the club alike.

The players were excited about the opportunity to play in the same team as the Australian forward. Some of the youngest players who had grown up watching him, could not wait to be sharing the dressing room with the superstar, hoping to learn as much as possible from him about the game. It was to be a huge learning experience for all the players of the Jamshedpur to play alongside one of the well-known faces of the sport.

The fans flocked to Jamshedpur Railway Station (Tatanagar Junction) to receive the team as it returned from its pre-season tour in Madrid, and escorted the team bus all the way home to The Flatlets, bursting crackers and playing dhols and nagadas along the way.

Soon the followers would set up fan clubs solely dedicated to Tim Cahill: they would occupy certain sections of the stadium chanting and cheering for the player while also displaying huge banners for him.

“As one of the most respected and famous football players in the world, Tim is very down-to-earth and humble,” Prashant Godbole, the team manager, told me once, speaking of his star player. “He always got along comfortably well with everyone in the team and was very polite and respectful to every individual he came across, be it a teammate or someone from the staff or the fans. He created an optimistic atmosphere in the dressing room and developed a good rapport with the team. With all the experience, knowledge and understanding of the game that Tim came with, he was successful in bringing out the best in everyone on the field.”

The players describe him as a person who they looked up to as their leader on and off the field, who would always keep them motivated to push their limits to improve themselves. Even on match days when Tim was not part of the playing squad, he would keep up the spirits of his teammates, constantly guiding and inspiring them with his talks before and after the matches and during half-time. The youngsters and ISL debutants in the team Vishal Das, Mobashir Rahman and Gaurav Mukhi, local Jamshedpur boys, were always keen on learning more from the marquee man.

Tim would provide extra care and attention to ensure that the young boys felt comfortable in the team and become a better version of themselves each day. Gaurav Mukhi, on scoring goals for the team, would always credit Tim for providing him with right inputs, during matches and in training sessions, on tips, tricks and techniques to become the lethal striker that he was striving to be.

Mobashir recalled, “I remember well the first day he arrived at the team camp in Madrid. He went around to greet and meet every member of the Club. I was very impressed by this gesture of his, as it talks about his extraordinary simplicity. He played an important role in building team spirit in our young team. He also went the extra mile in training sessions to share his knowledge.”

Although Jamshedpur FC missed the playoff spots by a whisker, the addition of Tim Cahill to the squad certainly brought a lot of improvements in the team as a whole. Compared to the Club’s debut season in the Indian Super League of 2017-18, the 2018-19 team was a much better and balanced team with a lot of firepower in the final third of the pitch, which it lacked in the previous season.

The team, known for its solid defence, focused more on keeping ball possession and playing quick passes, and was as good in front of the opposition goal as their defensive wall was. Known for his aerial ability, Tim Cahill was a weapon in front of the goal as he was spot on with his headers, scoring two magnificent goals by heading the ball in, even on being heavily marked by the opposing players.

Jamshedpur FC had never won against FC Goa in the Indian Super League suffering heavy losses at their hands, but a much stronger and much fiercer squad with Tim, defeated them 4-1 in their home ground. This shows the impact the presence of Cahill had on the team as they could quite comfortably beat one of their toughest opponents.

Cahill led quite a disciplined life: when he was not training, he would hit the gym along with his physio and mate Cody, or swim and relax in the pool. Being a family man, off the field he would spend most of his time talking to his family. At other times he would play FIFA, poker or billiards and snooker with his teammates.

He always made time for the fans, never refusing a photo or autograph. He learnt a few Indian words and phrases such as Namaste, Shukriya and Jam ke khelo so he could connect better with the local people. Every now and then he would express his gratitude to the fans for showering their love and support to the Club by posting pictures, messages and short vines on his social media handles. He loved sipping on Caramel Latte, and Chicken Korma with Naan was his favourite Indian delicacy. He was often seen visiting the mall in Jamshedpur and hanging out with his colleagues at cafes and bistros around the city.

Tim credits his teammate Karan Amin, one of the fullbacks at the Club, for influencing his tastes in Indian music. Karan introduced him to Indian rappers, with Divine becoming one of the artists he liked. Tim found a favourite song in the hit Punjabi number Daru Badnaam by Kamal Kahlon and Param Singh. He also liked watching Sacred Games, a hugely poluar Indian web series on Netflix.

“Meeting him was unreal… I used to see him play in the Premier League when I was young,” Karan recounted. “He is very humble which is surprising for a guy of his stature. He always helped everyone on and off the field. There was never a dull moment when chilling out or training with him.”

He added cheekily, “I call him a legend, but I used to beat him in FIFA!”

Tim Cahill is and will always be one of the greatest persons ever to play football on Indian soil and to have graced the Indian Super League. Jamshedpur is blessed to be added to the list of cities which have witnessed the phenomenal Tim Cahill’s signature celebration – punching the corner flag! He was more than just a marquee player at the Club, as he went beyond his way to extend support to his team, on and off the park, and promoted football in India by encouraging the development of local talent.