Bollywood film Airlift may have immortalised this 1990 event, but a more recent documentary by Viraf Kekobad and Hanif Modak tells a very different tale 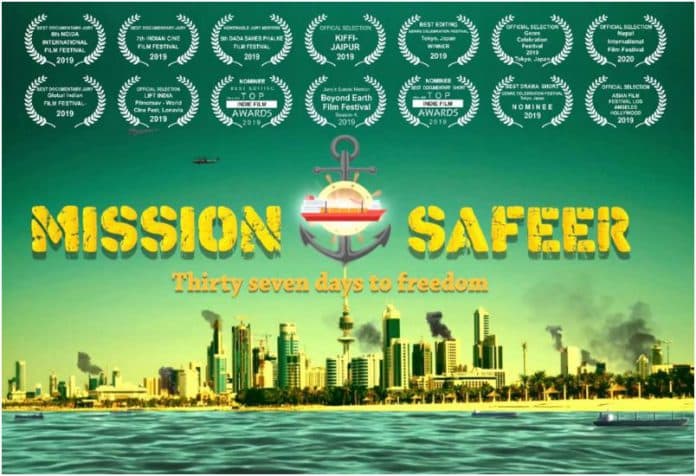 In a time when Indians around the world are desperately finding ways to get home safely, it’s worth remembering that this isn’t the first time (and probably not the last time) that we have faced tremendous odds. History is full of examples demonstrating the tenacity of the human spirit in such circumstances.

Considered the biggest sea evacuation of refugees on a cargo vessel, ‘Mission Safeer’ was the rescue mission of a cargo vessel caught in the war zone when Saddam Hussein attacked Kuwait on 2August, 1990.

The vessel was boarded by Iraqi forces and the crew of 26 Indians was interrogated at gunpoint. All provisions and goods were captured by the Iraqis and the Radio Room – the crew’s mode of contacting the ship’s owners – was sealed off. For the next month, the owners scrambled between consulates to negotiate the release of the vessel, with the help of the Indian government.

Captain Viraf Kekobad, one of the owners of the M V Safeer, now based in Gold Coast Australia, told Indian Link, “Our priority was to get the crew, many of whom I had sailed with, back to safety.”

When the Indian government announced it would evacuate Indian expatriates in Kuwait, the owners sought permissions from various authorities to use the M V Safeer for these evacuation. M V Safeer was a cargo ship designed to carry a complement of 40 crew only and arrangements had to be made to place additional life jackets and life rafts on board, as a safety measure for the evacuees to make the voyage to Dubai.

“I ran between Mumbai, Delhi and Dubai, where my senior partner, the late Captain Ibrahim Modak, was based,” said Kekobad recounted. “To get permissions to convert our cargo ship to hold passengers was a monumental task. We needed permission from our insurers, from safety authorities, from the government.”

On 11 August, over a week after the ordeal began, the Second Secretary of the Indian Embassy in Kuwait S M Mathur was allowed to board the ship to check on the crew. He confirmed that everyone was safe and in good health.

The turning point was when India’s then External Affairs Minister I K Gujral met with Iraqi President Saddam Hussein and received the green light to allow evacuations by land, air, or sea. Preparations began by the Government of India to bring its people home.

On 4 September 1990, the M V Safeer embarked with 722 Indians on board, including 265 women and children. They arrived two days later at Dubai after sailing through the mined waters of Kuwait and facing the risk of fire from Western naval forces monitoring the war zone.

“The Government of India evacuated a total of 170,000 Indians out of Kuwait during that time,” recalled Kekobad. “Our rescue mission got good media coverage in the Gulf. In the Indian media, the coverage was less so and we did not seek any publicity either. Those days, even the government did not get recognition for these efforts.”

The entire ordeal, a true story of heroism and adversity, lasted 37 days.

“Airlift says that it was inspired by true events. Unfortunately, 95% of the movie shows falsities,” explained Kekobad. “It got this into the public domain in the wrong way.”

In the Bollywood film, the ship’s captain is depicted accepting money to take Indian refugees onboard. In reality, the M V Safeer carried out the voyage free of cost and provided food for the people on board. The movie also showed diplomats and ambassadors who worked on the evacuation, in a poor light.

“The movie really distorted history and hurt us badly,” Kekobad lamented. “Even people who know us and knew about our efforts, cast aspersions on us after the movie came out 26 years later.”

To set the record straight, the owners of the M V Safeer, Viraf Kekobad and his late partner’s son Hanif Modak, decided to create a documentary of the experience. They contacted passengers on the ship, the officers on-board and the diplomats involved in the evacuation.

“Piece by piece, we started fitting it all together. First, to contact people, you can understand the challenge we had. Over 20 years after the event, it was hard to track people down,” explained Kekobad.

The film took almost a year to complete, including obtaining footage from the BBC who had reported on the evacuation in 1990. Apart from this, the documentary also included original documents like newspaper cuttings, captain’s logs, and Kekobad’s diary at the time.

“Believe me, there were times when we thought ‘what will we do with all these old papers,’ but they came in very handy!” he laughed.

Mission Safeer… 37 Days to Freedom has been well-received since its release in 2018, winning the award for Honourable Jury Mention at the 9th Dada Saheb Phalke Film Festival 2019 and getting selected for the Genre Celebration Film Festival 2019 in Japan.

This humanitarian mission was also recognised by the LIMCA Book of Records as the biggest rescue by the merchant navy.

Taking place three decades earlier but sounding like a familiar story of stranded Indians during the pandemic, the film serves as a reminder that we have all faced difficult odds, but with teamwork and determination, we have always made it through.