Way you're playing is a big joke: Medvedev to Nadal 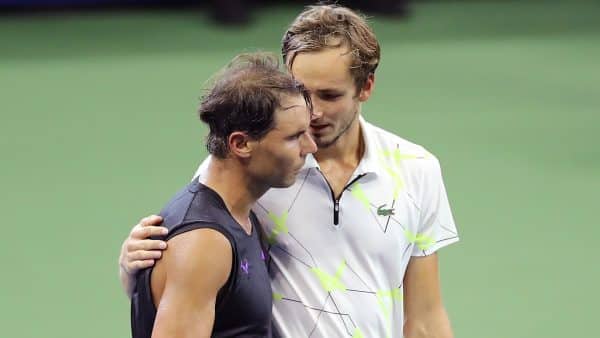 Reading Time: 2 minutes
World No. 2 Rafael Nadal was in tears after clinching his 19th Grand Slam title at the US Open. The King of Clay, earned a hard-won fourth US Open title, against Daniil Medvedev of Russia in a thrilling final.
“This victory is so important for me,” said Spanish ace on Sunday as he wiped away tears during the trophy presentation after registering a 7-5, 6-3, 5-7, 4-6, 6-4 victory in one of the most gripping five-set finals in Grand Slam history that lasted for four hours and 50 minutes.

“Especially as the match became more and more difficult. I was able to hold the nerves. They were so high. It was a crazy match and I’m just very emotional,” said Nadal. “It was an amazing final. Daniil is only 23-years-old and the way he was able to fight and change the rhythm of the match was amazing.”


“He will have many more opportunities like this,” Nadal said while praising Medvedev.
The tension had engulfed the entire Arthur Ashe Stadium as the Russian rallied from two sets and a break down to force a decider. However, Nadal, showing his trademark fighting spirit, withstood his challenger to close the gap to just one on Swiss legend Roger Federer in the all-time title chase.

“The way you are playing is a big joke,” Medvedev told Nadal during the trophy ceremony. “It’s very tough to play against you. Because of the crowd, I was fighting like hell.

“In the third set, in my mind, I was already thinking what to say in the speech. I was fighting and I didn’t give up, but unfortunately it didn’t go my way,” he added.
The US Open victory was also Nadal’s second Grand Slam title of the year after he won his 12th French Open crown in June.
- Advertisement -
Share
WhatsApp
Facebook
Twitter
Linkedin
Previous articleScholarships for students pursuing Data, AI and Cloud Computing courses!
Next articleDiana Sinha: Hindi from friends