Couples have had to choose between postponing or scaling down their Big Fat Indian wedding. There have been takers for both. 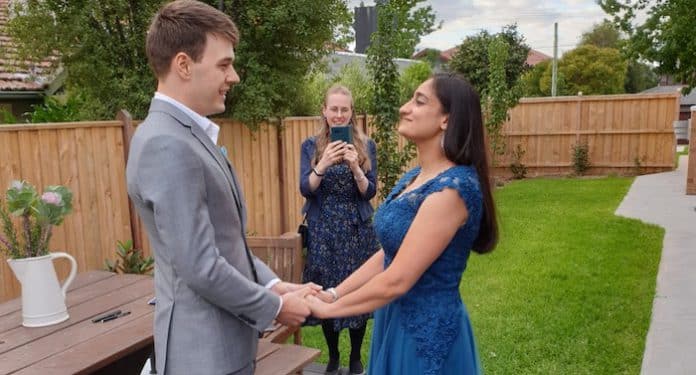 In 1992 Meena’s wedding was lavish, long and attended by hundreds. Fast forward to 2020 and her daughter Sheena’s nuptials were the polar opposite. The bride, groom, celebrant, Sheena’s elder sister and brother-in-law were the only ones in attendance. The rest of the family including Meena and her husband – the bride’s father – witnessed the wedding on Skype.

An Indian wedding with just five people? Shock! Horror! How was it even possible? That’s how many people we would expect not to turn up at the event. Seriously, that is how many people generally go to choose the bridal lehnga (traditional wedding outfit) between all the siblings, aunties and cousins.

Sheena, unfortunately, had no such luxury. One year of preparations, detailed planning, multiple shopping trips to India and hundreds of RSVP came to a naught with the Federal Government restrictions on limiting the numbers at weddings to 5. The decision was made, recently, to ramp up efforts to control community transmissions of the dreaded COVID virus.

With that one announcement Sheena’s dream wedding turned into a nightmare. “I was so upset I cried all night,” said Meena as she recounted her experience to Indian Link. “My heart went out to Sheena as I know how much blood and sweat went into the planning. Yet I was amazed at how she took everything in her stride. I know she was hurting but she stood firm in her decision not to cancel or postpone her wedding yet abide by the new regulations.”

The bride, groom, celebrant, Sheena’s elder sister and brother-in-law were the only ones in attendance at the wedding.

“This is a classic case of circumstances beyond our control,” Meena added. “We are yet to be reimbursed the deposits paid to the venue, florist, photographer and caterer, and our insurance has refused to cover anything, but our daughter is the happiest person in town as she got to marry the man she loves.”

Vandana Rammi Chhabra echoed similar sentiments. Her son’s wedding was scheduled in the first week of May. They decided to postpone all the wedding events to a future undecided date in the wake of the new restrictions.

“The young couple have been very resilient through this difficult time,” Vandana said. “My husband is a medical professional and he predicted the restrictions in advance based on his experience and observation of other affected countries.”

Her son maintained that everybody’s health and wellbeing was far more important, and the community needs to be safe. He did not wish to expose his wedding guests to even the smallest chance of contamination.

Vandana confessed that initially she was like a child who wants the moon. She had seen the effort put in by her children – Dave and Chandan and though she knew they had made the right decision, her heart found it difficult to come to terms with it all.

In any case cancellation was not an option for them as the venue was not willing to consider a refund, however, most of the providers were willing to work with them in future once the curve flattens.

“I know it’s not going to be easy to coordinate everything again and work around availability and dates of the vendors and venues, but I am now relieved that we came to the conclusion quickly to postpone everything till things settle and restrictions are lifted,” said Rammi optimistically.

In Karan Gandhok’s daughter’s wedding both postponement and cancellation were totally ruled out. “In our culture it is considered inauspicious to cancel a wedding and even if there is a death in the family, the wedding still goes ahead,” explained Karan.

Karan found out on the morning of his daughter’s sangeet ceremony that the opulent venue they had chosen was unable to host the 400 guests that were to attend due to phase two restrictions. He had to change the venue to another on the same day and restrict the numbers to 100.

“A year of planning, shopping, setting the theme and dancing rehearsals all went belly up in a second,” recalled Karan. “It’s funny how we Indians believe in accepting our destiny, but during weddings and funerals we tend to get very emotional.”

According to him his generation was raised on stories of great-grandparents living in trenches during wartime and grandparents suffering during the partition. The recent COVID restrictions are certainly not the end of the world.

“If you put it in perspective, this is nothing in comparison to those difficult times. All the Government is asking us to do is to stay at home and be safe. I agree people’s plans got thrown out of the window but at least we now have a story to tell our own grandchildren. This is a wedding no one will forget ever,” he said philosophically.

Karan’s family decided to go ahead with the wedding but with smaller numbers and do away with the reception at altogether. The bride and groom intend to celebrate their first anniversary exactly as they had planned their reception. Karan’s mother and brother, who were here to attend the wedding from overseas, are now stranded indefinitely in Australia due to travel bans and flight cancelations.

Archana Shridhar, who recently postponed her daughter Pallavi’s wedding that was to be held in the end of March, agrees with Karan. “It is definitely not the end of the world and we all need to keep our spirits up and find solutions rather than wallow in sadness,” she said.

Archana’s daughter Pallavi and son-in-law Michael exchanged their wows in a civil ceremony with only two witnesses as per current restrictions but the family intends to continue the celebrations with a traditional wedding ceremony when it is safe to hold one with all their guests in attendance.

“What’s a wedding without people – we have postponed our plans and we will do it when we can have all our friends and family attend,” she said with conviction.

She is very proud of how her children have handled the situation and the strength they have shown despite their disappointment. She sent an email to all her guests to keep the economy ticking and supporting the vendors and small businesses that are affected at various levels by event cancelations.

Karan seconds Archana’s opinion wholeheartedly. According to him the bigger casualties after all this will be businesses and bankruptcies will be the norm. “Small businesses rely on deposits as their cash flow and we need to support them and ensure that we bring the community spirit back. We have to reboot the economy and at the same time be prepared for the effects of COVID that are likely to last for a long time,” he said in conclusion.