Virtual Rabindra Jayanti event one of the first of its kind 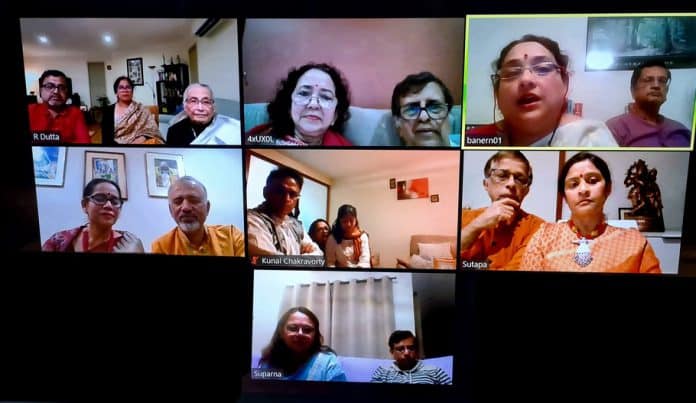 As we have all become unfortunately aware, the impact of a global pandemic is multi-faceted, spanning across almost every aspect of our lives. While Zoom calls have now become a ubiquitous way to bridge the distance between family and friends, arts and culture have taken somewhat of a back seat. Earlier this month, in an effort to continue old traditions and remain culturally connected, one close-knit group of friends in Sydney’s Bengali community found an innovative new use for video-conferencing, hosting what may well have been one of the first completely virtual Rabindra Jayanti events, in celebration of the birthday of Bengali cultural icon Rabindranath Tagore.

A poet, novelist, musician, painter and playwright, Tagore’s immense cultural influence has spanned several generations and is ubiquitous with Bengal. His literary and artistic achievements are unrivalled, but despite the Nobel Prize to his name, Tagore’s most enduring legacy today is the annual Rabindra Jayanti celebration, which has long seen the performance by young and old of dance, drama, music and poetry written and composed by Tagore.

For organiser Nandini Banerjee, Tagore’s works were synonymous with childhood. “Like most Bengalis, a huge part of my upbringing was through the poetic eyes of Tagore’s literary works,” she told Indian Link. “Each year, my family and I would eagerly await early May to celebrate the literary genius’s birthday. This year, in the middle of a global pandemic, I was disappointed knowing Tagore’s 159th birthday celebration would go amiss. I began to think whether I could, like the rest of the world, adapt to the current situation.”

And inspiration was not far away. “I thought of Tagore’s play Pujarini and how despite all odds, the main character, Srimati performed Buddha’s puja during a period of strict order against all prayers,” continued Banerjee. “It occurred to me, although we are all living in isolation, we may be able to continue our celebrations through a virtual meeting! I excitedly contacted my friends and flagged the idea. With everyone’s support, the planning began and we continued the annual tradition with great success.”

With over a dozen participants, ranging in age from as young as 12 to over 80 years of age, it was no small feat to organise the event, especially acknowledging the inherent limitations of technology. While a chorus was not practicable, those on the call took turns reciting poetry, singing and playing instruments from the comfort of their own homes on a cosy Friday night.

Like any cultural programme, participants practised in advance of the event, leading some, like Sanghamitra Mitra, to feel even more connected to Tagore’s works than they otherwise might have been. “This year, before practising, I did a bit of research for the best song to sing in these times,” she revealed. “Tagore’s is such a vast collection; he has written for every occasion. At some points, I even got the feeling Tagore knew that a pandemic will hit and we will all observe his birthday online!”

For participants Chandrama Acharya and Sutapa Chattopadhyay, the virtual event was a welcome way to feel closer to friends while paying tribute to tradition. “I still feel connected to my roots as I start my mornings humming to Tagore’s songs or close the day reading his poems,” Acharya observed. “His philosophy of life, love for nature, faith in humanity built the foundation of my life. Celebrating his birthday is showing my gratitude to this great educator, philosopher and poet for giving out so much happiness and peace in my life.”

For Chattopadhyay too, Tagore remains synonymous with her upbringing: “From my school days, I have enjoyed celebrating Rabindra Jayanti,” she said. “Tagore’s songs and poems are a part of my life and this event helped me stay connected with my friends who share the same cultural heritage.”

Life during the COVID-19 pandemic has been full of mostly unwelcome twists and turns, but as Acharya noted, “Tagore’s songs and poems give us great solace that after every dark day there is a new dawn that brings hope, the cycle of life will continue and we shall not lose faith in humanity”.  As Tagore once wrote:

Reveal yourself from the emptiness of the soul
Let life be victorious once more,
Let the wonder of the infinite be revealed through your creation

It is not without reason that Tagore’s works continue to transcend age, generations and borders. Almost 80 years on from the date these words were penned, as humanity grapples with its current plight but looks also to greener pastures ahead, Tagore’s musings remain as poignant and relevant as ever.

READ ALSO: A tribute to Tagore