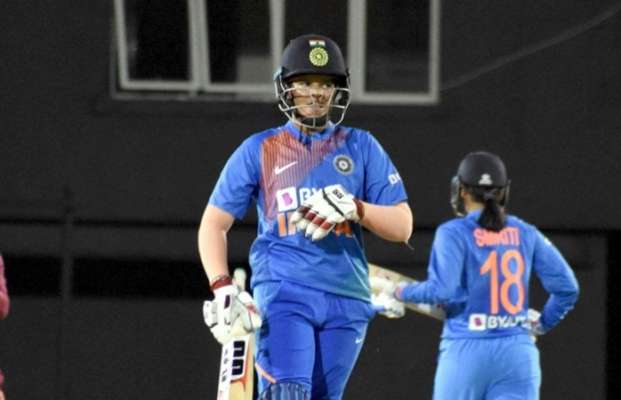 Brilliant innings from openers Shafali Verma and Smriti Mandhana helped India beat Australia by seven wickets on Saturday at the Junction Oval to keep themselves alive in the ongoing Women’s T20 tri-series.

Chasing a huge total of 174, Indian eves rode on a sublime opening partnership between Verma and Mandhana who took the Australian bowlers to the cleaners right from the start. Verma (49 from 28) and Mandhana (55 from 48) ensured the pressure on the hosts’ bowlers never let up as they launched the chase with an aggressive 85-run opening stand.

16-year-old Verma, in particular, was mighty impressive as right from the word go, she put the pressure on the experienced Australian bowling line-up.

Mandhana played second fiddle to Verma early, but ensured the pressure remained right on Australia when her opening partner fell. The left-hander has strong record on Australian wickets and has been building into this tri-series nicely, with her half-century on Saturday adding to scores of 15, 35 and 45 in her first three matches.

Jemimah Rodrigues, who came in next, also continued the momentum with her quickfire 19-ball 30. In the end, skipper Harmanpreet Kaur and Deepti Sharma made sure there were no hiccups and crossed the line with two balls to spare.

Earlier, Ashleigh Gardner produced her swash-buckling best in a career-high 93 from just 57 deliveries as Australia posted a formidable 173/5 in their stipulated 20 overs. Skipper Meg Lanning also contributed with a quick-fire 22-ball 37.

Australia could have gone beyond 200. However, the death overs delivered by Shikha Pandey and Rajeshwari Gayakwad made sure Australians were restricted beneath 180.

Pandey allowed just two runs from the 19th over, before Gayakwad, after being hit for six by Perry, leaked just three from her last five balls.

Australia will now face England in a do-or-die match against England on Sunday.