Vande Bharat Mission ex Australia is off the ground

The first lot of Indian nationals stranded in Australia are currently homebound, in an Air India flight out of Sydney 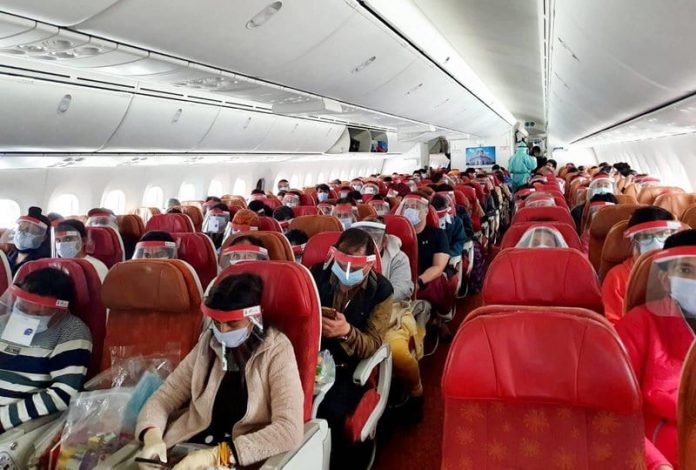 Such was the excitement to be on the first Vande Bharat repatriation flight to India that people fortunate enough to be selected started lining up at Sydney airport at 4.30am.

As a special flight, check-in opened four and a half hours prior to take off, with a whole range of health checks to be conducted.

For Sukhwinder Kaur, it was mixed reactions of relief as well as grief, as she was finally able to take her son’s ashes back home. She had arrived in Sydney under very trying circumstances, to be at her seriously ill son Harpreet’s bedside. The young Harpreet had touched the hearts of his compatriots here as he bravely battled a brain tumour single-handedly, waiting for his mum to get various approvals under COVID-restricted travel conditions.

Helped by local community members such as Sewa Singh and his family and staunch supporter Varun, Sukhwinder Kaur was seen off at the airport by five new but very close friends.

For Vishal Joshi, it was an overnight drive from Melbourne to put his mum on the flight. “It was a load off her shoulder to learn that she was picked by the Indian High Commission for this first flight,” he told Indian Link. “Her visit here was due to end in late March, and the last few weeks were filled with stress because of the uncertainty of it all. She is happy to be going home.”

Also at the airport was Sakshi, who was on a visit here with her 7-year-old daughter. She was relieved to be finally able to go back home, but was apprehensive about the time in quarantine that awaits at the end of the flight. She was also concerned about the long waiting times to complete the check-in formalities, reporting that an elderly passenger ahead of her had collapsed.

On the whole though, the mood was of relief as the long period of waiting and the stress of the uncertainty had finally come to an end.

The crew themselves turned out smart and energetic and vibrant, fully aware of the magnitude of the responsibility they had taken on with these special flights.

Would it be comfortable to fly with all the protective gear on for a long stretch of time?

“We have all the safety precautions in place so there should be nothing to worry about.”

He added with a smile, “It’s been a while since we have flown and once we were in the cockpit it was great to be back in our familiar comfort zone, the special circumstances notwithstanding. And of course this is an opportunity to give back to our country and to society in our own way, having also brought back Australians to their country.”

The Consul General of India (Sydney) Manish Gupta and Air India Regional Manager Anil Kaul were both present to ensure that this repatriation flight went off smoothly. They were seen reassuring the passengers and assisting with modalities to get the flight off the ground.

“The logistical exercise in organising this flight was challenging, as we had to seek various permissions such as the countries over which we would be flying, since everyone is in lockdown at the moment and these are not routine flights,” Anil Kaul told Indian Link. “But in the end, it has been satisfying that we were able to pull off all these elements and to see the relief in the passengers as they finally make their way home.”

Meanwhile, many more Indian nationals wait eagerly to get on to similar flights in the coming days, in the first phase of repatriation out of Australia ending 28 May.

Indian Link will continue to bring you information and details as they come to hand.