Even those as powerless as a grain of salt can make a difference, Gandhi said once. In today’s America, its kids are hoping to be the grains of salt that will transform their gun violence ridden society 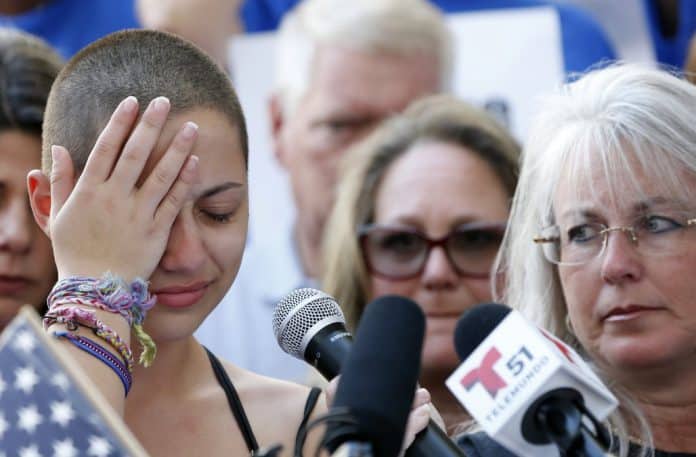 It may have only been the seventh week of the new year, but the US has seen its seventh school shooting.
That’s one incident per week, so far.
In the latest attack in Parklands in Florida, 17 people – mostly students – lost their lives.
In a country with a population of about 300 million, there are almost 300 million firearms. And these mind you, are not single shot weapons but handguns and semiautomatic weapons. The AR-15 rifle used by the Parkland shooter Nikolas Cruz uses bullets which can not only penetrate the human body but tear it apart like a grenade would.
The world watches – in disbelief as the US shows no rush to change its archaic gun laws, and in awe as its youngest citizens take up the cudgels in the fight against gun violence.
Teenaged Parklands survivor Emma Gonzalez touched a chord with her inspiring anger as she called “BS” to the adults whose responsibility it is to see that she goes to school safely. Her speech – filled with tears of pain and grief and rage – will probably go down as a historic moment in the fight for gun control. In fact, she left little doubt of her resolve as she vowed to put her school in the history books as the last school to suffer the horror of mass shootings.
Fellow students from the Marjory Stoneman Douglas High School in Fort Lauderdale, Florida have spoken up with just as much passion at Call to Action Against Gun Violence rallies. Together, they have inspired students across the country’s schools to walk out in solidarity, and to head to Washington on 24 March in what they’re calling March for our Lives.
Even the kids in America realise that it is legislation that is the ultimate answer, regardless of what the gun lobby has been saying for decades.
Australia is a wonderful example of this, as Emma pointed out in her fiery protest speech.


The swift and decisive government action following the horror of Port Arthur 1996 – when gunman Martin Bryant killed 35 people with his semi-automatic – is reprised often in the narrative on gun violence. Within two weeks of the incident, Prime Minister John Howard had secured the support of all states in Australia in banning semi-automatic weapons and handguns. In the last 20-plus years, it is believed that just over a third of the country’s semi-automatic weapons, about a million, have been sold back to the government and destroyed. Not only have mass shootings been prevented, but homicides and suicides have also reportedly come down.
Meanwhile, in the United States, mass shootings continue to take precious lives with increasing regularity.
When indeed, as a Gosford priest asked in a billboard to world acclaim, will they love their kids more than their guns?
History tells us that momentous social change comes about when common people, disillusioned with the system, take it upon themselves to be the change they want to see.
Such as when Rosa Parks refused to give up her bus seat to a white person in segregated USA.
Such as when one British woman allowed into the House of Commons, instead of going to the Ladies Gallery as expected, ran onto the floor of the chamber as a suffragette.
Such as when a frail old man in India picked up a grain of salt to break the Salt Laws, and inspired a nation to disobey peacefully and bring a colonial empire to its knees.
Even those as powerless as a grain of salt can make a difference, Gandhi said then.
Acts of defiance by common people – mere grains of salt – who had had enough, have transformed societies.
Here’s hoping that the kids in America become the grains of salt their country clearly needs so desperately.
- Advertisement -
Share
WhatsApp
Facebook
Twitter
Linkedin
Previous articleFor Modi, road to 2019 may be steeper
Next articleHindu Council to felicitate women achievers