Hymns, enactment of the Salt March and a digital display of Gandhi's silhouette were some of the ways the uni celebrated the occasion 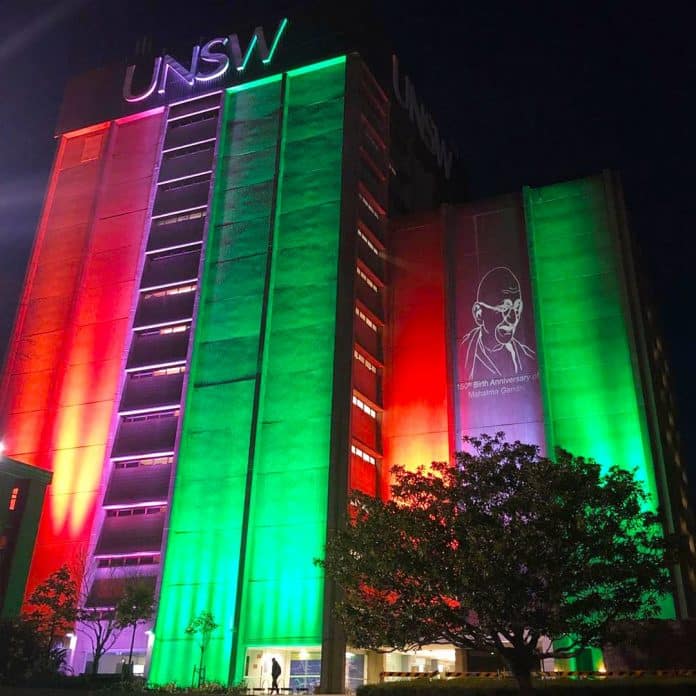 Reading Time: 3 minutesIt was just over 8 years ago that the bust of Mahatma Gandhi arrived at the University of New South Wales in Sydney. A gift from the Government of India facilitated by the then Consul General Amit Dasgupta, it came at the height of the international student crisis: through this special gesture, the Indian government acknowledged the work being done by UNSW as a safe environment for international – particularly Indian – students.

Eight years on, the Library Lawn where the bust of the Mahatma sits, has gone on to become the venue for Gandhi Jayanti celebrations for the local Indian Australian community. This year, the event was particularly significant, as it marks the onset of year-long celebrations for the 150th birthday of the most well-known Indian in the world. 2 Oct being a university working day, many curious students stopped by to get a peek at the festivities.
The Patron of the Australia India Institute at UNSW Dr Neville Roach pointed out that Australia, due to its geographical positioning is one of the first countries in the world to celebrate this milestone Indian event.

Prof Laurie Pearcey, who leads UNSW’s global partnership team and who also happens to be the youngest Pro-Vice-Chancellor in Australia, urged all to reflect on the values of Gandhi in today’s world. He also confirmed that the UNSW views India as a key strategic partner in its 2025 strategy. He also spoke of the importance given to education as part of the bilateral trade between the two countries in the recently released economic strategy for India. He expressed his delight at the doubling of the number of Indian overseas students at UNSW, from 600 last year to 1,200 now.
He remarked, “Gandhi stressed that education is the key for not only changing attitudes, but also to shaping the new generation. He challenged us to be thoughtful and be educated. He was an advocate of change and resistance, but also of harmony and tolerance and cooperation, which is why commemorating his birthday is just as important here in Australia as it is in India and in many countries around the world.”

Speaking on behalf of the Indian government, Consul General of India (Sydney) B Vanlalvawna thanked the UNSW for hosting such an important event and also shared that the Indian government had made plans to have a series of celebrations over the next two years to celebrate the 150th birthday of the Mahatma. This includes planting of 150 trees in collaboration with local councils and an increased discussion of khadi, as more than just clothing.
Hymns were presented by Usha Sridhar and young Tanaya Kumar. The littlies from Mala Mehta’s IABBV Hindi School enacted Gandhiji’s famous Salt March around the Library Lawns, with Akash Venkataraman channelling the Mahatma. Students from Darcy Road Public School, guided by their teacher Ekta Chanana, sang the hymn Sabarmati Ke Sant.

UNSW’s Gandhi tribute this year also includes an illumination of the Library tower in Indian colours, and the digital display of Gandhi’s silhouette. This will run till 15 Oct, so grab your chance to get your selfies. Remember to use the hashtag #BapuAt150 or #GandhiAt150.