U19 WC: India reach semis after hard-fought win over Aus 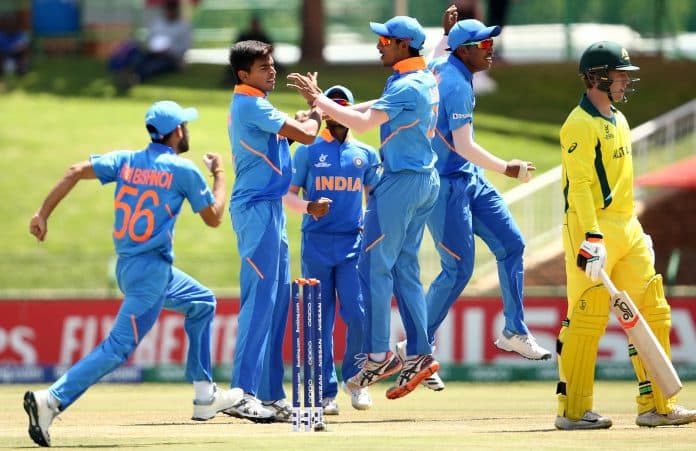 India defended a total of 234 as they beat Australia by 74 runs in a match that swung both ways at various stages in the quarter final of the 2020 ICC U19 World Cup in Potchefstroom. They thus sealed a place in the semi-finals, which will be played on February 4.

The Australian chase had a disastrous start with three wickets falling in the very first over. Opener Jake Fraser-McGurk was run out off the first ball of the innings. Kartik Tyagi then took the wickets of Australia captain Mackenzie Harvey and Lachlan Hearne off the fourth and fifth balls of the over.

In his next over, Tyagi dismissed Oliver Davies and Australia found themselves at 17/4 in the third over. Patrick Rowe then held on with opener Sam Fanning and the pair ensured that Australia did not lose a wicket for the next 18 overs. The runs were difficult to come by as they looked to play it safe.

India appealed for obstruction of field against Fanning in the eighth over. The latter had taken a single and, while grounding his bat at the non-striker’s end, stopped the ball with his free hand. The throw was veering off target and the umpires sent the decision to the third umpire with a soft signal of not out. The decision went Fanning’s way.

Fanning ended up playing an innings that briefly gave Australia a chance for an unlikely win. India’s next wicket came as Tyagi was brought back for the 20th over. He managed to get Rowe to edge the ball to the wicketkeeper off the second ball of the over.

India went wicketless for another 20 overs as Fanning and Liam Scott helped Australia to start taking control of the chase. Sparks flew between the two sides with Fanning seeming to elbow fast bowler Akash Singh while taking a run.

Just as the pair started to accelerate, Ravi Bishnoi got the breakthrough. Bishnoi spun the ball away from Scott who tried a cut but only got an edge to the wicketkeeper. The partnership between him and Fanning thus ended at 81.

Three wickets in the next over all but ended the match. Akash got the big wicket of Fanning, who walked having made 75 off 127 balls. Connor Sully was then run out off the next ball and Todd Murphy was bowled off the one after that.

Tyagi was brought back into the attack but his over could’nt produce a wicket. He thus ended the match on four wickets as Akash then castled Matthew Willians in the next over to complete India’s victory.

Earlier, India’s batsmen were tested by a resolute Australian attack. Opener Yashasvi Jaiswal played anchor to the top order, scoring 62 off 82 balls and later Atharva Ankolekar and Ravi Bishnoi’s efforts ensured that India reached 233. The Indian team for U19 World Cup sealed its place in the semi-finals.