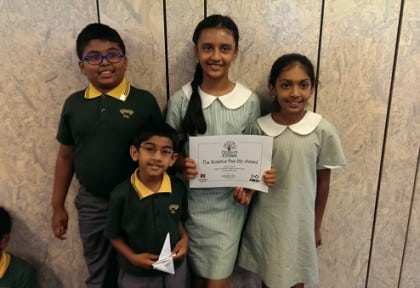 Imagine you are a honey bee. Your environment is being destroyed and you face the threat of being poisoned by pesticides and attacked by predators. You need to fight off these forces while still making honey and pollinating fruits and vegetables for people to enjoy. How do you survive?
This was the question presented recently to students at Girraween Public School taking part in the FIRST® LEGO® League Junior, a global competition designed to inspire children to learn more about science and engineering. The contest is designed to enable children to discover how science and technology impact the world around them. Each year, students are asked to solve a real-world problem through research, critical thinking and imagination.

Under the concept of project-based learning, students are required to investigate the problem, develop a solution and design a LEGO model to showcase their proposed solution, and one of the parts of their model has to be motorised using basic robotics.
At Girraween, students aged between six and ten years old used their creativity and research skills to showcase what they learned about bees and their habitat. In various teams, they created robotic models, made entirely of specially developed LEGO®, to show solutions to problems that bees are facing including use of harmful pesticides, invasion by parasites and loss of habitat.
The project was undertaken over seven weeks, which involved a significant amount of work along the way. The children met with an apiculturist, set team goals, learned about machines, built the models, learned to code and had to make a poster describing their findings. All this work was done outside of school hours, which displays an impressive amount of dedication from such young students!


In early December the students showcased their projects to their teachers and other students at Girraween Public School before participating in the National Championships of the FIRST® LEGO® League at Macquarie University on 10 December.
“The kids had an invaluable experience at Macquarie University,” said Chintan Shah from FunDo Kids, the children’s workshop mentor. “Denmark’s High Commissioner was the guest speaker and he came around to see the projects and chat to the kids, along with other judges and volunteers.” (LEGO® was invented in Denmark).
There were a number of other schools participating in the Championships. “While the junior program is designed to encourage everyone and there are no winners or losers, our teams picked up some key awards,” Shah shared.

Among the teams, students received the awards for Public Speaking, the Bee-search (research) Award, Sustainability Award, the Hive Award, the Live Well Award and the Bee Peaceful Award.
Students were also inventive with their team names. Team ‘BEE the best’ (Afreen Zoha, Mithiren Logeswararajah, Soham Patel and Thrishla Vallam) designed a model to solve the issue of the harmful use of pesticides, which kills millions of bees annually.

“Our model contains a cave which a bear lives in, trees for bees to pollinate, bushes, a pond and a treasure chest to show the money that a farmer is making,” the team shared. “The farmer makes money from the bees when they pollinate plants to grow fruit and from the large supplies of honey. We also have a motorised part in our model – a motorised pesticide sprayer that sprays lots of chemicals that are good for the bees but are harmful to parasites and all the other things that can harm bees.”
Another team, ‘LEGO Buzzers’ (Khushi Patel, Diva Parmar, Vivaan Shah, Kylash Durairaj and Rohit Uthayachandra) were tasked with exploring the problem of parasites attacking bees and their hives.

“The challenge is that bees are constantly getting raided by parasites. As these parasites enter the hive, they go into the cells where the bees are developing and threaten their growth,” they explained. “Our solution is to build a mesh around the hive and if it gets destroyed when parasites enter, a gas launcher will launch gas. This is to make the bees evacuate, leaving them safe. The mesh surrounds the hive and the door is always kept closed and the idea is that the parasites bounce off the mesh, hopefully proving our idea works. We have built a bee paradise with plants, a flower garden and a water fountain for the bees to enjoy and be happy.”
Team ‘BEE a Genius’ also created a model design to showcase their ideas for combatting parasitic attacks against bees.

“Parasites harm bees by getting into their breathing tube and weakening them. Eventually, the bee dies. The parasites spread and soon the entire colony dies,” the children explained. “To solve this problem, we use a special spray to take down only the pesticides, not the bees; because we learnt that pesticides can also take down bees. In our model, we have included parasites rushing into their hive to get to the bees, but a pesticide is waiting for them. A house is shown to indicate human activity, a pond, bushes and a flower field show the natural environment.”
It was impressive to see children as young as six exposed to such a wonderful opportunity, learning valuable skills such as leadership and team work.

“We cooperated and did our best to build this entire model, we had to think of the plans. We divided the work in sections, and we talked to our team, and our mentor, Mr Chintan,” one student, Soham Patel, shared. “We also learnt that we had to communicate to get help, otherwise we wouldn’t have time to fix up mistakes and do all the great things.”
- Advertisement -
Share
WhatsApp
Facebook
Twitter
Linkedin
Previous articleMixed messages
Next articleYoga and a healthy pregnancy