Two Presidents and a PM 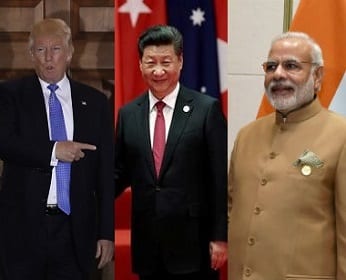 It’s been an interesting month.
On one side of the world, the US President who continues to plumb to new depths as he battles on with everyone – international foes, media, domestic leaders, and people on the street. Donald Trump’s speech at the UN made headlines when he threatened to “totally destroy” North Korea, declaring that the “Rocket Man,” a.k.a. North Korean leader Kim Jong-un, was “on a suicide mission.” Trump raged at “loser terrorists” and the “murderous regime” in Iran, and startlingly suggested that parts of the world “are going to hell.”
At home, he has raged against NFL players who are using their moment in the spotlight to call out police atrocities against African-Americans, and reduced a pregnant and grieving war widow to tears with his insensitive remarks about her departed husband.
As two natural disasters hit the US – Hurricane Harvey in Texas and Hurricane Maria in Puerto Rico – Trump belittled Puerto Rico mayor Carmen Yulin Cruz who sought more help, and then went on to unfairly compare Hurricane Maria to Hurricane Katrina based on how many people had died, implying what was happening in Puerto Rico wasn’t a “real catastrophe.”
And all this while there is an ongoing special inquiry into the Trump team’s colluding with overseas sources to win the last elections.

On the other side of the globe, China’s President retained his position for another five years. At last year’s meeting of the Communist Party of China, President Xi was accorded the title of “core” leader, and at this year’s pivotal National Congress, a twice-a-decade meeting, the 2,000 delegates voted unanimously to make “Xi Jinping Thought on Socialism with Chinese Characteristics for a New Era” a guiding principle for the party. This makes Xi considered on par with stalwarts Chairman Mao (who founded the People’s Republic in 1949), and Deng Xiaoping (whose legacy in reviving the economy was labelled “Deng Xiaoping Theory”).
Labelling this as the third chapter of modern China, Xi has articulated a promise of “harmonious living between man and nature” – a call for better environmental control (as the US goes the other way to open oil drilling in previously protected areas); set out a 30-year time frame for the country to become a “global leader” with international influence; including leading in “innovation” by 2035, with big data and artificial intelligence integrated in the “real economy.”  However, there were no mentions of the issues such human rights and censorship which are widely condemned by leading world commentators.

And then in India, PM Modi seems to be fighting to successfully execute his new GST policy, which is threatening to weaken his party’s hold on power. Elected on the promise of weeding out corruption, no substantial progress has been made in this regard in the last three years; unemployment in the country is rising and seems to have worsened after demonetisation; there seems to be low private investment activity on the ground, and very few land and labour reforms have been progressed. The Modi government seems to be blind to these issues at best, or has given up on them, at worst. The government, which won the last general election with a record mandate, needs to deliver for India, both internally and externally.
Of the two Presidents and one Prime Minister, only one seems to have a vision. Shame that the other two with strong people’s democracies are missing out.