Twitter is now part of the 'optics' for India's Cabinet Ministers 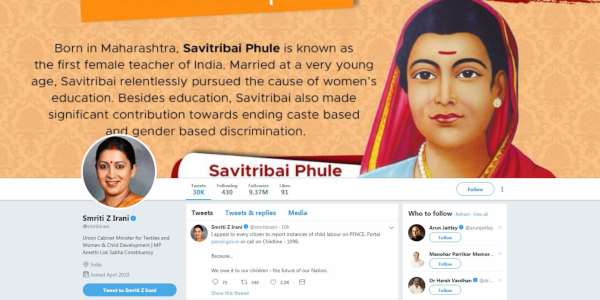 External Affairs Minister S. Jaishankar joined Twitter a couple of years ago, but he posted his first tweet only a day after becoming a Minister in Prime Minister Narendra Modi’s new Cabinet.
“My first tweet. Thank you all for the best wishes! Honoured to be given this responsibility. Proud to follow on (sic) the footsteps of @SushmaSwaraj ji,” Jaishankar tweeted on May 31.
Of the nearly 70 tweets he has posted so far on the micro-blogging platform, all of them are in English, except the one posted on June 2 in which he assured the people of the country that the Central government had no intention to impose any language.
Jaishankar posted that tweet (pictured below) in Tamil, showing very well that he was fully aware of the audience he was addressing, and also how fast he was learning to use Twitter as part of the “optics”, just as any other politician would do.


If Jaishankar, a diplomat-turned-administrator, took just a couple of days to master the platform, it is not difficult to imagine how a seasoned politician would use it. And make no mistake, all of them are on Twitter, following in PM Modi’s social media footsteps.
An analysis of the tweets by the Cabinet Ministers shows that Hindi and English have emerged as the dominant language of communication on the platform.
Depending on the message they want to convey, the ministers sometimes resort to using other regional languages.
However, some ministers like Thawar Chand Gehlot, Union Minister for Social Justice and Empowerment; Mahendra Nath Pandey, Union Minister for Skill Development and Entrepreneurship; Giriraj Singh, Union Minister for Animal Husbandry, Dairying and Fisheries; and Ram Vilas Paswan, Union Minister for Consumer Affairs, Food and Public Distribution appear to be more fond of tweeting in Hindi.
But with language translation tools now readily available, no one seems to be complaining about the use of Hindi or other regional languages by a Cabinet Minister.
“Given the ease of translation within Twitter or other platforms, I don’t see an issue with politicians using whatever their language of choice is, as long as it aligns with their intended audience or the statement they want to make. Political communications are much about the optics,” says leading tech policy and media consultant Prasanto K. Roy.
“However, given the sensitivity in southern and eastern India to the imposition of Hindi, for someone aiming at a national plus global audience, English does make more sense in India, unless there’s a specific point the person is trying to make through his choice of Hindi as a language on Twitter”.
Language, however, is not the only tool that the ministers are carefully choosing to score a point on Twitter.
Some are even taking a keen interest on the kind of images displayed on their Twitter page.
Union Minister for Women and Child Development Smriti Irani, for example, chose to display a message about Savitribai Phule, known as the first female teacher in India and a crusader against caste and patriarchy, in an apparent attempt to earn the goodwill of the marginalised sections of the population.

Be it language or images, clearly, Twitter is fast becoming the medium of choice for Indian ministers.
IANS
- Advertisement -
Share
WhatsApp
Facebook
Twitter
Linkedin
Previous articleNine-year-old dancer shows all the markings of a dance prodigy
Next articleHow an early Girish Karnad encounter impacted this Adelaide writer