Her tenure in Congress has been defined by her anti-interventionist foreign policy positions. 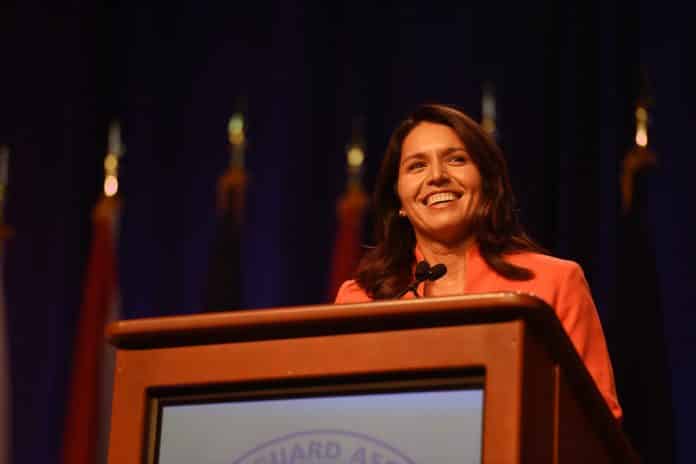 Tulsi Gabbard, the first Hindu US Congresswoman, has officially launched her 2020 presidential campaign in Hawaii. “It is this principle of service above self that is at the heart of every soldier, at the heart of every service member, and it is in this spirit that today I announce my candidacy for President of the United States of America,” CNN quoted Gabbard as saying.

“I will bring this soldier’s principles to the White House, restoring the values of dignity, honour and respect to the presidency and above all else, love for our people and love for our country.
“I ask you to join me, join me in putting this spirit, this spirit of service above self at the forefront and to stand up against the forces of greed and corruption.
“The road ahead will not be easy. The battles will be tough. The obstacles great, but I know when we stand united by our love for our people and for our country, there is no obstacle we cannot overcome. There is no battle we cannot win,” said Gabbard, who is not of Indian descent but comes from a Hindu family in Hawaii.

The official launch of the 37-year-old four-term Democratic congresswoman’s campaign gives her presidential bid a chance at a reset after weeks of discord heading into the announcement.
Gabbard, an Iraq War veteran who gained national prominence in 2016 as an outspoken supporter of Vermont Senator Bernie Sanders’ 2016 campaign, will run for President as an anti-interventionalist Democrat who supports a populist economic agenda.
While the Congresswoman has highlighted health care access, criminal justice reform and climate change as key platform issues for her presidential run, her tenure in Congress has been defined by her anti-interventionist foreign policy positions.

US support for Saudi Arabia’s genocidal war in Yemen must end. Over 85k children have died, tens of millions w/o food & water, creating worst humanitarian crisis in a generation — supported by the US and never authorized by Congress. This must end now. https://t.co/TXYyZ9abW7

Gabbard, who sits on the House Armed Services Committee, is the only military veteran to declare her candidacy and could be relying on her two tours in the Middle East to differentiate her from many Democratic presidential candidates, including Indian and African-Jamaican descent Senator Kamala Harris, Senator Elizabeth Warren and former Housing Secretary Julian Castro.
She is popular for some progressive policies, though she received flak even within her own party over a 2017 meeting with Syrian President Bashar al-Assad and past positions opposed to LGBTQ rights.