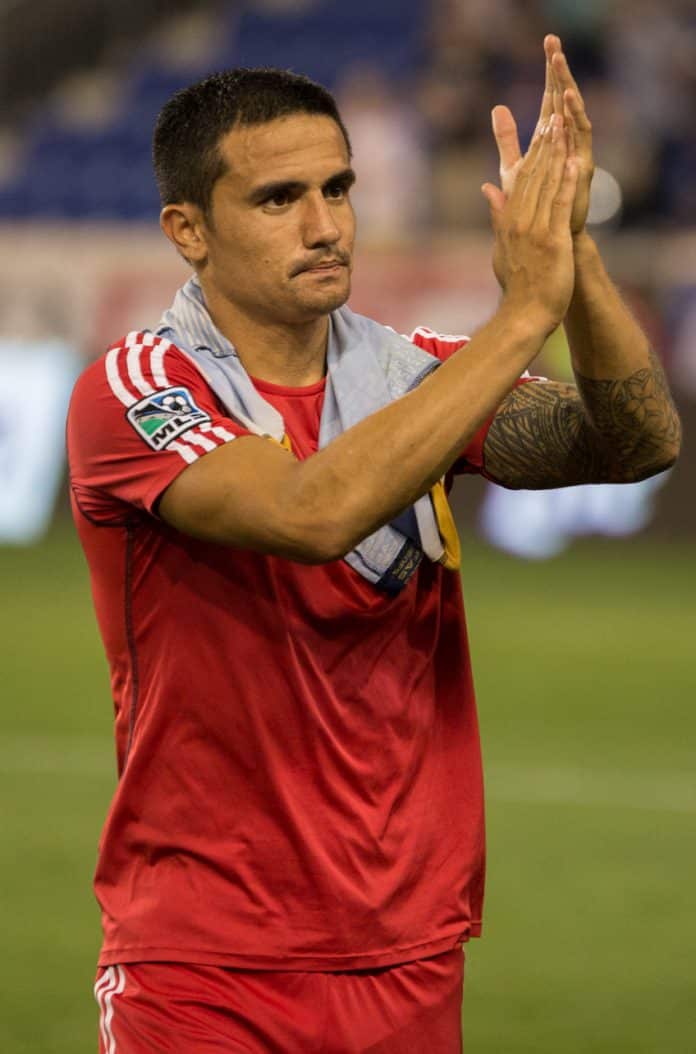 Reading Time: 2 minutes“You will absolutely love India,” India’s favourite Australian sport star Brett Lee told Tim Cahill recently.
Cricketer Dean Jones and he were welcoming to India the Aussie soccer legend and former Australian Socceroos captain, who has been signed up by Jamshedpur FC in the Indian Super League.
Commenting on the development, Cahill said: “I’m excited to be part of the ISL and my new team Jamshedpur. It’s been an easy process to make this decision because of the club’s professionalism and their goals for what they want to achieve.”

“To be a part of their project is massive for me because I know I can help the team on and off the park with my leadership and experience. I want to help grow the game in India and encourage young kids to play football,” he added.
Cahill, 38, takes to India his rich footballing experience, having scored 168 goals in 694 club appearances in his career. He is also the all-time leading goal scorer for Australia, having scored 50 goals in 107 international caps between 2004 and 2018. He was the first Australian to score at a FIFA World Cup and has played in four World Cups (2006, 2010, 2014 & 2018). He also played long spells for English top-tier clubs Everton and Millwall.
Cahill, who has joined the squad in Madrid as the team prepares for the 2018-19 ISL season, has called India his “last hurrah”. However, he will make his farewell appearance as a Socceroo in a testimonial match against Lebanon at ANZ Stadium in Sydney on 20 Nov.
The cash-rich ISL was launched in 2014 and has attracted many international players. Cahill’s team alone has six other internationals, including Brazil’s Memo, and Spain’s Tiri, Carlos Calvo, Sergio Cidoncha, Mario Arques and Pablo Morgado.
Spain’s Cesar Ferrando is head coach of Jamshedpur FC; the assistant coach and goalkeeping coach, Guillermo Gonazlez and Ezequiel Leon respectively, also come from Spain.
Cahill is the seventh international sign-up for Jamshedpur FC and will be counted as a marquee signing, which means his wages do not come under the established salary cap. There’s no doubt Cahill will give a fillip to Jamshedpur, which finished pretty low in its inaugural appearance in the 2017-2018 season.
Jamshedpur FC was launched in 2017 by Tata Steel. This, together with the fact that Jamshedpur is often called India’s Steel City, has led to the team members being referred to as ‘Men of Steel’. Jamshedpur FC will take on Mumbai City in their first ISL match at the Mumbai Football Arena on October 2, 2018.
IANS and other sources