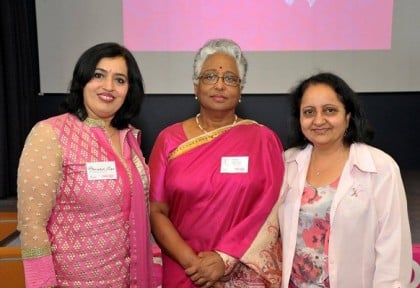 Empowerment, wellbeing, women, that is the war cry of Pink Sari Inc, the newly created community entity that has taken charge of the award-winning Pink Sari Project from the NSW Multicultural Health Communication Service.
The project was formally handed over by delegates from MHCS, Breast Screen NSW and South East Sydney Local Health District to a volunteer team led by Meenakshi Chopra and Shantha Viswanathan at a glittering ceremony at Sydney Hospital.

Addressing the gathering, Peter Todaro, Director of NSW MHCS said, “The Pink Sari Project has achieved some remarkable outcomes thanks to overwhelming community support and participation. Projects like this don’t just happen. In my many years working in health, I have never seen a campaign taken over and led by a community that ensures sustainability. The response has been fantastic.
“We are thankful for outstanding achievements accomplished through support of community groups, health professionals and most importantly breast cancer survivors. We are profoundly grateful to all the stakeholders and participants for embracing this project wholeheartedly.”
From small beginnings in 2014, Pink Sari has fired the imagination of the culturally and linguistically diverse South Asian community in NSW as it waged a campaign against breast cancer. Shattering myths and misgivings, it has successfully raised awareness of the silent killer, encouraging more women from Indian and Sri Lankan backgrounds to participate in BreastScreen programs and undergo mammograms.
Previously, women from the community had one of the lowest screening rates in NSW, largely due to inhibitions surrounding intrusive physical examinations and disrobing. In the process, the Pink Sari Project has overwhelmingly changed attitudes, bringing the community together like never before for a joyful celebration of life.

After two years, the Pink Sari Project has achieved positive results. Research from Cancer Institute NSW reported that, the number of breast screens for women from Indian and Sri Lankan backgrounds had increased 17%, with numbers continuing to rise. The initiative has also received recognition by winning prestigious national and international awards.
Key awards include the International Association for Measurement and Evaluation of Communication Gold Award for Best campaign in the public/non profit sector, and the Grand Prix Platinum Award for evaluation research, which was conducted by an interdisciplinary team at UTS by Professor Jim Macnamara. The campaign received the SESLHD iiHub Award for creativity and was finalist at the 2015 Australian National Multicultural Marketing Awards.
Speaking on the power of community engagement, Project leader Michael Camit said the objective was to encourage more tests for Indian and Sri Lankan women, aged between 50 and 74, who were not using free screening services such as BreastScreen, thereby promoting early detection.
“For some groups, such as women from Indian and Sri Lankan backgrounds, participation was really low. But community engagement since the Project took off has been amazing,” said Trudy Phelps, Portfolio Manager at BreastScreen NSW. “It has since set a template for dynamic grassroots projects. Thank you for working with us to reduce incidence and impact of breast cancer.”

Unveiling her vision for the future, Meenakshi Chopra said that Pink Sari Inc would aim to be much more than a breast cancer awareness program.
“We want to focus on early detection and prevention but also hope to engage on broader welfare issues. To change attitudes, we need to look deep within and create a sense of ownership. From a specific project, we have grown to become a movement and it is a proud moment for our community,” she said.
“Watching Pink Sari grow with passionate contributions from both the hardworking committee, and various community members at all levels, has ignited a vision as we move forward and enter an exciting new phase. We are doing it differently because we want to make a difference,” she added, thanking Michael Camit and project curator Kevin Bathman.
Forging new pathways, particularly through art and music, Pink Sari has already reached out to rural communities, through Sikh networks in Griffith and Woolgoolga.
Following the hugely successful Portraits In Pink exhibition that featured fourteen survivors, an innovative multilingual digital story campaign also hopes to reach new audiences.