There’s a bear in there, and Nick as well! 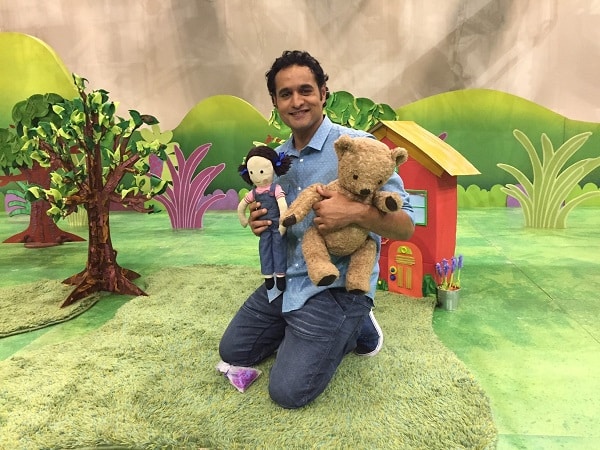 If you’ve grown up in Australia, or been around children who have, you’ve likely heard of Play School. Widely considered one of the most iconic television shows in Australian history, Play School has been a staple of children’s edutainment since 1966, making it the longest running children’s show in Australia. In 2003, the ABC estimated that 80% of pre-school children under six watch the program at least once a week, a percentage that correlates to around 1.5m viewers each week! For the last few weeks now, those 1.5m viewers have met Aussie-Indian musician and actor Nicholas Brown.
Born and raised in Australia by Indian parents, Nick moved to Mumbai in 2007 to pursue a Bollywood career. Having trained at NIDA and having an above-average interest in song and dance, Bollywood felt ‘like a second home’, Nick tells us. After finding success and collaborating with Hrithik Roshan in 2010’s critically acclaimed Kites, Nick returned to Australia but not before starring in a stage show of Disney’s Beauty and the Beast in India. Nick laughs, recalling the experience, “A lot of Bollywood stars attended the stage show and complimented us on our flawless lip syncing. We had to tell them that we actually sing and dance at the same time.”
Overall, Nick’s experiences in Bollywood were favourable, despite the expected culture shock. “When we take risks, I think they almost always pay off. I had nothing to lose and wondered what it was like to live and work over there with no expectations or idea what I was in for. India is an assault on the senses, even for people of Indian origin.”

But any discomforts were made up for by the overwhelming ‘adventure, excitement of the unknown’. Upon asking if he’d return to Bollywood, Nick says, “I could never be Bollywooded out but TV is so great right now, and so many great actors are doing television,” so he decided it was time to pursue the medium.
Nick’s next move was LA where he faced “absolutely blatant racism”. Roles for actors of Indian appearance are often restricted to doctors, nerds and terrorists. “My agent kept telling me to be geekier and nerdier, but I am a big, beefy guy. I can’t hide that, and I didn’t want to be a career terrorist.”
So, how did a big, beefy guy navigate his way to children’s television?
“I had auditioned for Play School many times when I was younger without any luck.” However, now he feels “the timing is right, now I am a bit older and more mature”. Nick also has real live children in his life now with whom he interacts and admits that absolutely provides “more of an understanding of the work”.
At a time where the brown male body remains the single most vilified image in the Western world, the importance of being able to see one’s self represented on screen and across media and advertising, is a crucial element of developing one’s sense of self, especially from an early age. Men of Indian appearance are routinely seen through a media lens as dangerous, so the introduction of a presenter of Indian descent into Play School is a phenomenal step in the direction of positive representation. Something Nick is absolutely thrilled to be a part of.
“It is so important for young people to have positive role models and see themselves depicted on screen, especially young Indian kids”. Additionally, it is just as important for children of non-Indian backgrounds to see the brown male body represented in a positive manner to counter-act all the negative representation. A huge focus of Nick’s work is around “normalising diversity, which is important for future generations. At the moment, it is such a buzzword and actors are cast for the sake of it.”
In the future, he hopes that diverse actors are presented with opportunities as diverse as their respective backgrounds.
As for his own future plans, Nick is presently content with where he is working on Play School and is also lending his voice and using his platforms to aid the Yes Campaign for Marriage Equality of which he is a big proponent. “I am a Yes campaigner! And I believe in equality for all”.
Saving the most important question for last, Nick confirms that he would indeed always and without hesitation choose to go through the Arch Play School window (earning a thumb’s up from us!) but also goes on to explain, “There is a diamond window now! We went through it the other day!” Change is well and truly in the air, even on Australia’s oldest television sets – the sort of change that is both long overdue and wholeheartedly welcome.