The year in review 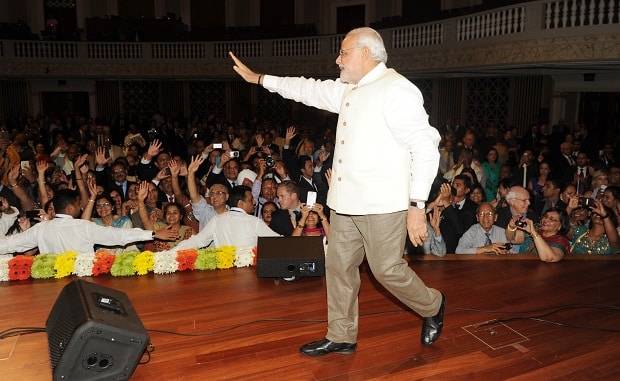 With the chants only just fading away, there are no prizes for guessing the Event of the Year.

The first prime ministerial visit in 28 years united the Indians in Australia like never before. Nearly 17,000 of them descended on Sydney from far and wide, some famously on a train from Melbourne, to hear the ever-popular Narendra Modi deliver his magic oratory. Well, he blew them all away with his particular style of rhetoric, in a manner that his Australian counterpart – and dost – Tony Abbott can only dream of.

He impressed his hosts suitably as well (and not just while addressing parliament), and helped steady the Indo-Oz relationship towards mutual benefit. But now he has his work cut out for him, and to quote India’s favourite novelist Chetan Bhagat, he needs to “come home, cook dinner and be judged by a million mothers-in-law”. Perhaps for us in Australia this means seeing the mutual trade stagnating at $15 billion rise exponentially, and/or creating some movement on the uranium front?

The spin-offs for us from the Modi visit are many: the announcement of TVOA (Tourist Visa On Arrival); the birth of a dependable, efficient and effective new organisation IACF (Indian Australian Community Foundation), and the knowledge that the Modi government is open to inputs from NRI community groups.

Modi’s visit followed Tony Abbott’s own tour of India in September at which a uranium deal was signed, and links established in science, education and energy sectors.

Two members of our community this year were appointed to high-profile positions. Dr GK (Hari) Harinath took office as Chair of the NSW Community Relations Commission, and Nihal Gupta became Chairman of SBS.

Dr Harinath has also been Chairman of Parramasala, for which funding has just been cut. The multicultural arts festival has struggled a bit in recent years, but it did put Parramatta on the map and it will be a pity to see it go. Did it take too long to turn it around from a high-brow performing arts festival to something the masses could enjoy?

The Australia Day and Queen’s Birthday Honours lists included a bunch of Indian-origin awardees yet again, but a special mention must be made here of our women in science who were felicitated this year. Respect!

And the award goes to… the Hindu Council of Australia’s Deepavali Fair at Parramatta Park, following its smaller preamble at Martin Place a few weeks prior. Thanks to its well-thought out and neatly executed program, all the other large-scale fairs paled in comparison yet again this year.

In an interesting development, smaller Diwali fairs cropped up this year at other pockets of the community, enabling revellers to share the festive spirit close to where they live. No doubt the trend is here to stay as the community increases in numbers.

A year of firsts

The Sydney Opera House celebrated its first Diwali, lit up in bright lights to welcome Goddess Lakshmi to the city of Sydney, in what is set to become an annual affair.

In another first, Destination NSW released a series of short films for the Indian market, created by local film-maker Anupam Sharma, aimed at enticing tourists. Within a few months, the South Australian Tourism Commission followed up with its own short film featuring former test cricketer Ajay Jadeja.

Meanwhile, there was a fair bit of interest in sport this year. The Indian cricket team is touring currently and has just finished the first test, having snatched defeat from the jaws of victory yet again! In what will be a long tour, they will stay on for the World Cup till late March.

Many from the team attended the funeral of Aussie cricketer Phil Hughes who died in a freak accident only weeks ago.

Sachin Tendulkar dropped by in October to receive a Bradman honour, and also made the news when his autobiography was released recently.

Shuttler Saina Nehwal was around in July, winning the Star Australian Badminton Open (as well as the respect and admiration of mainstream sports journalists).

In other sports, AFL created quite a stir with its multicultural tournament at which India participated for the second time. A specially organised India-Pakistan match, titled the Dosti (Friendship) Cup, generated much interest in the community. (I should mention here the abusive phone call we received at the office from a small-minded reader who complained about our pic of a Pakistani player on the cover. You just don’t get it, do you?)

In other flashes of brilliance, we had wrestler Rupinder Kaur who represented Australia at the Glasgow Commonwealth Games; 14-year-old Mohak Issar who made the NSW Under-15 ice hockey team, and Prateeti Sabhlok who made it to the national synchronised swimming team. As well, Amit Balgi, a cricketer and dentistry student, was named the 2014 Bradman Scholar for the year by the Bradman Foundation.

In a welcome move, community organisations based on the professions are beginning to extend themselves in an attempt to contribute to society in more meaningful ways. The Australian Indian Medical Graduates Association (AIMGA) and the IIT Alumni Association of Australia (IITAAA) both held major events this year, the former in an effort to undertake healthcare projects in India, and the latter, to help forge links between their alma mater and universities here.

In a commendable new program developed by UWS academic Mridula Chakraborty, literary links between India and Australia are being forged as Indigenous writers reach out to Indian audiences.

Here’s hoping that significant new pathways are forged in these and similar endeavours.

Also within the community, we’ve seen the rise of organised networks that support families with special needs members. Samarpan and the Hindu Social Service Foundation regularly organise services and events for disabled kids and their carers.

Another trend worth noting is the rise of multifaith connections across communities. These have been particularly significant this week as we deal with the emotional aftermath of the Sydney siege. But through the year, interesting networks have evolved between the Hindu and Jewish communities not only in NSW but also in Victoria, highlighting centuries of friendship as well as a strategic relationship in contemporary times.

(Speaking of faith-based communities, the Hindu Council of Australia seems to have become the premier organisation for Indians in Sydney, as it attracts people from across linguistic and regional divides. However, its power seems to come less from its religious leanings, and more from its efficient structure and a clear vision of purpose, that other organisations could well emulate).

Meanwhile, another observation has been the increasing appearance of Indian-origin participants on reality TV shows. MasterChef Australia has seen many Indian faces such as Rishi Desai, Neha Sen and Depali Behar, all of who have been featured in Indian Link this past year, as they move on to food-based careers post MasterChef. (This year, the Big Brother house had an Indian inmate). The young Neel Kolhatkar continues to make a mark on the comedy scene, and with his social media following.

There seems to be an increasing confidence in asserting our Indian identity in the mainstream, even as we blend in as best as we can.

News from our cousins interstate

The Indian community in Victoria, much larger and perhaps better served by its community organisations, has provided us with much material this year. The Indian Film Festival attracted large number of stars from Bollywood as usual, but this year brought us the star of the stars himself, Amitabh Bachchan (who also launched a self-named scholarship for a university student). Melbourne’s week-long Diwali festival, organised by Celebrate India, saw much mainstream participation, including greetings at airports and train stations, as well as a mega event at Federation Square that attracted large crowds. India Museum, a community-based museum of some prized Indian artefacts opened in Melbourne this year, and the World’s Most Liveable City also announced its plans for the first Indian-specific aged care facility.

From South Australia, we brought you news of the Anzac snub suffered by an Indian contingent of ex-armed forces personnel that wants to participate in the annual march, even as other cities allow Indian participants in due recognition of the significant role they played at Anzac Cove.

At Queensland, it was a university course on Bollywood – yes, that’s right, Bollywood – that made news this year. The Queensland University of Technology inaugurated a Bachelor of Entertainment Industries course that took students to Mumbai to study the processes in India’s film industry.

And a thumbs-up to…

…us at Indian Link, for having stuck around for two whole decades, and this year bringing home four multicultural awards, taking our awards haul to thirteen!