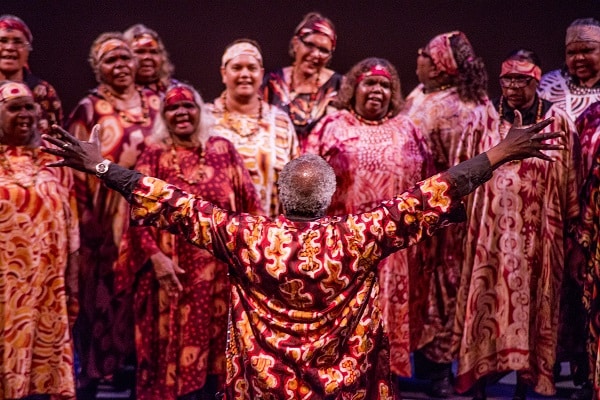 Reading Time: 3 minutesAn Indian origin filmmaker, an Indigenous story, a German influence and an Australian film. Together, these take cross-cultural relationships to another level in Naina Sen’s documentary The Song Keepers.

The Melbourne International Film Festival Premiere Fund, which offers minority co-financing to new Australian feature films, brings to MIFF 2017 this 84-minute feature-film-length documentary.
The Song Keepers will be among the six Australian films that will have their world premiere season at Melbourne International Film Festival during 4-20 August 2017.
It relates the story of an Aboriginal women’s choir and their efforts in preserving some of the world’s oldest sacred songs.
This choral practice in remote Central Australian communities is a union of Baroque music and centuries-old sacred poetry (hymns) held within the Western Arrarnta and Pitjantjatjara languages.

In mid-2015 the choir embarked on a tour of Germany to take back the 14th century Lutheran hymns given by German missionaries, now sung in Aboriginal languages.
Naina documented the historic tour and captured the strength, camaraderie and joy of the participants.

A powerful narrative was created combining a rich cultural resource, a legacy of music and a realist aesthetic.

“It is an extraordinary story of some extraordinary women,” said Naina as she shared her experience behind the lens. It took three and a half years for the film to be created from concept to screen, she revealed.
Naina came to Australia in 2001 to do her Masters in Media Studies (Film and Television). Originally from Bengal, she grew up partly in Saudi Arabia and mostly in New Delhi.
Her initial plan was to start a career in making ad films, however, six months into her studies she realised she wanted to make documentaries instead. After what she terms as a lot of ‘grunt work’ she slowly realised her dream.
In the last decade Naina has created a number of award winning film clips, installations and documentaries. Most of her work has been in remote Indigenous communities in the Northern Territory and Western Australia.
“I experienced a real connect with the Indigenous culture and people,” Naina recounted. “I felt a strange sense of familiarity that down the track made me leave lovely Melbourne and move to Darwin in 2007.”
Since 2012 she has moved back and forth between Darwin and Melbourne.
“Unlike many people from Melbourne and Sydney who move up north looking for something outside of their culture, I was looking for something closer to my upbringing and cultural references,” claimed Naina.

According to her the Aboriginal people have diverse communities, rituals and languages that is quite similar to the regional diversity in India.
She was intrigued when she heard about an Aboriginal women’s choir from a woman named Miranda Daniel who she met on a flight to Alice Springs. She did a Google search but did not find much on them besides some amateur clips.
She was drawn to the tonality of their voices and the extraordinary sound that seemed to come from a very old place. She offered to assist Morris the conductor with the projection and installation. He loved the idea of the narrative and visual projection and contacted her.
When she found out about their plans to go to Germany, taking the 140-year-old music back to the place of its origin, she felt this historic tour should be documented. That became the start of her journey with The Song Keepers.
The niche audience for the movie would be anyone who is willing to go on an enjoyable, layered journey with some incredibly powerful, strong, funny and cheeky women who come together unexpectedly and against the odds to do something extraordinary.
The film is deeply rooted in the heart of Australian identity. “MIFF has tagged it as Australia’s answer to the Bueno Vista Social Club. It is in a sense a personal storytelling, which is the type of storytelling that I gravitate to most,” said Naina.
Naina Sen and the entire Aboriginal Women’s Choir will be at the Melbourne International Film Festival in early August.
Naina is currently working on a couple of different projects with a focus on links between Indian and Indigenous cultures.
The world premiere of The Song Keepers is on Sun 6 August 3.30pm at The Forum Theatre. You can also see the film on Tue 8 August 6.45pm at Hoyts Melbourne Central Cinema 10