A reason to distrust 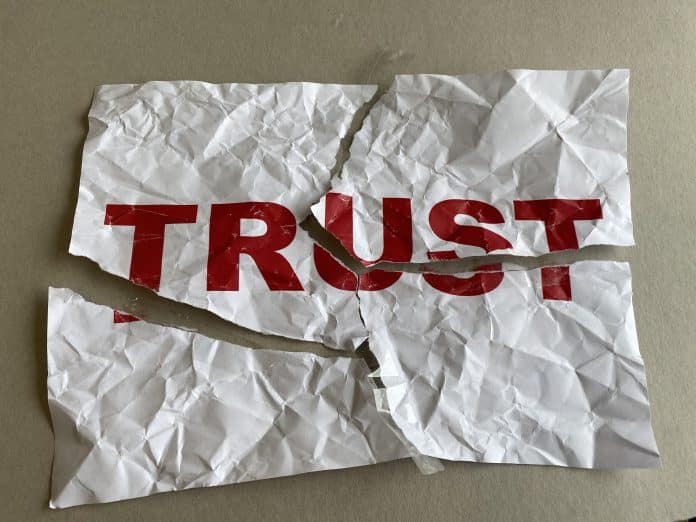 2020 has started from where last year left off – with a trust deficit in those who lead, both in politics and corporate life.

But what is trust deficit? Simply speaking, it is the inability to have reliance on, or confidence in, a relationship or an organisation or an institution.

As an example, the financial planning industry took a hit on the trust factor when reports of misdeeds came out in the Hayne Royal Commission last year, the after-effects still making headlines. People remain wary of the banks: a Deloitte Trust Index-Banking report released last year confirmed that more than half surveyed saw a trust deficit in the ethics of senior management of the banks. The banks were looking at short-term profits, whereas people were looking for relationship and a feeling of community. The report pointed out that customers want to be shown respect, want banks to listen to their gripes, to admit mistakes, and to be open and honest.

And the same can be said of our politicians. Nationally, Prime Minister Scott Morrison has to work hard to win back the trust and confidence of the Australian people after his initial mishandling of the bushfire disasters. From his Hawaii holidays to laying the blame on the states, the public was clearly unimpressed. The daggy-dad-from-the-burbs persona was quickly replaced by a bumbling leader who could not take control while the nation burned – literally. Much to his credit, the PM has been a man of action in the last two to three weeks, with the mobilisation of the army reservists to help in the relief efforts and the quick allocation of resources to those most effected. With two-plus years to go to the next election, he does have time to narrow that trust deficit.

Internationally, there is a trust deficit in the ongoing shenanigans of the US President Donald Trump. With the impeachment trial still on, the truth is being divided between party lines. Evidence that’s emerging which could make it difficult for Trump, is being held back by those in his own party. Truth be damned, it is survival at any cost.

The reality revealed by both contemporary US politics and our own, is that the broken moral compass needs fixing. Faith in politicians is steadily eroding: honesty and morality, two important pillars in the trust factor are non-existent.

The silver lining to it all, and there definitely is one, comes from regular folk. The outpouring of community support during the recent bushfires was wonderfully heartening and truly uplifting. Whether contributing financially, knitting pouches for the animals, donating filled backpacks for school kids, or sending food and clothing, coming out loud and clear was a great spirit of sharing and trust. No deficit here; instead, a surplus – and an opportunity for the corporates and politicians to learn from the ‘quiet Australians’.