The SRK seduction at IFFM 2019 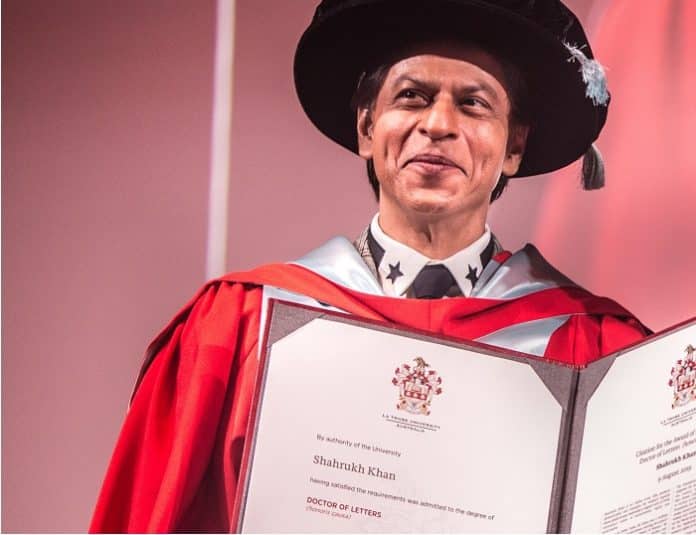 Tunny is one of many new fans Shah Rukh has won in Australia.
Described repeatedly as “India’s – the world’s – biggest movie star”, Shah Rukh Khan wowed everyone he engaged with on his brief trip down under as a guest of the Indian Film Festival of Melbourne (IFFM) – including, in all probability, the koala and the python that were brought out to welcome him at LaTrobe University.

He had impeccable manners – kissing the women, looking genuinely thrilled as he received the LaTrobe and IFFM honours, remembering lines from his movies, joining the fans to shake a leg – and left the mainstream in awe just as much with his star appeal as with his humility.
Bollywood’s undisputed king Shah Rukh Khan (SRK) enjoyed adulation from thousands of adoring fans that braved the inclement weather to catch a glimpse of their favourite star.

From his first public appearance at the Press Conference held at Collins Street to the after party at the IFFM Awards Night, SRK did what he does best – he charmed irresistibly.
The dimpled smile, witty remarks and chivalry were all out on full display at his first appearance at the media meet, as he held the chair open for fellow actor and festival guest Tabu and then cheekily blamed her for the late start. Of course the actress forgave him in a heartbeat, as did everyone else that was kept waiting at other events thanks to his chronic inability to keep time. We hope it’s because he hopped from commitment to commitment and not because he was just fashionably late.

He remembered his last visit to Melbourne in 2006-2007 during the filming of Chak de India when he was a rising superstar, making many hit films and being declared the sexiest man in Asia.
“So I come back here again, still a rising superstar, not making too many hit films… in fact, trying desperately to do so, but still irrepressibly the sexiest (even) today,” he said, tongue in cheek.
He went on to thank the Indian diaspora and the Indian Film Festival of Melbourne for their contribution in bringing Indian films to the world.

The large number of media folk at the press meet remained mainly focussed on SRK, as if he was the only person they came to meet. So he carted the microphone around for every panel member to have a say, and not feel left out. Charming as well as magnanimous, was the general consensus.

The SRK seduction continued at the Awards Night held at the Palais Theatre, where security had their work cut out keeping the screaming fans from mobbing him as he entered through the aisles. He waved, shook hands and blew kisses, and they tripped over themselves in their attempts to get closer, and to take that all important selfie.
The glamorous awards night had much to offer but the audience was clearly restless to hear from King Khan till he finally obliged. Accepting his award for Excellence in Cinema IFFM 2019, he couldn’t go past a few lines of his written speech before the audience started yelling out his name and professing their undying love for him.
The King of Romance raced through his formal speech to return the sentiment with some popular romantic dialogues from his films addressed to the women in the audience. Selfies temporarily forgotten, they all but swooned.
Acquiring some new fans SRK voluntarily joined Emotion21Inc, a group of dancers with Down syndrome and proved yet again how well he connects with and touches people, a craft that amplifies his personal brand.

As yesteryears actress Simi Garewal claimed, the star is richer than Tom Cruise (who, you ask) with a net worth of over $600 million, he owns land on the moon, has a perfume to his name and the Paris museum once released a limited edition coin with his image that is worth a fortune today.
Dishing out wisecracks at every opportunity, SRK’s humour was lapped up by an appreciative crowd, the piece de resistance of the gala being his impromptu signature moves on the hit song Chaiya Chaiya that worked like a charm.
Enjoying a brief encounter with Australian native animals at Melbourne’s LaTrobe University, he confessed that it was his first encounter with a snake and that he was ‘touched’ by the python that was put around his neck in welcome.
After instructing the university’s top brass in his signature open-armed pose, he joined a formal and impressive academic ceremony to accept an honorary degree. The Doctor Of Letters honour was awarded to SRK in recognition of his outstanding achievements within the entertainment industry, for his ongoing championship of human rights and his advocacy for social justice.
Felicitating him, University Chancellor John Brumby recognised his wide-ranging humanitarian work, including establishing the Meer Foundation to support and empower women who have survived acid attacks in India.

During his occasional address SRK briefly explained the inspiration and purpose behind establishing Meer Foundation and said, “This is not an award for anything that the Meer Foundation might have achieved. It is for the courage of every woman who faces the brutality of injustice, inequality and inhumanity.”
La Trobe University also announced the Shah Rukh Khan La Trobe University PhD Scholarship, providing an opportunity for an aspiring female researcher from India to complete her general Scholarship in LA Trobe University. The four-year full fee research scholarship is valued in excess of $200,000.
Shah Rukh remarked that university is a place where youngsters have opportunities not just for academics and extra curriculars, but also for a better life, and to offer that opportunity to a girl from India is a wonderful gesture by La Trobe.
Later that evening SRK officially opened the Indian Film Festival of Melbourne 2019 as their chief guest and major drawcard. The Festival opened with the screening of Bulbul Can Sing, an acclaimed film by director Rima Das.
Conferred with many titles ranging from Doctor, Knight, King Khan to Badshah of Bollywood, it was clear that Shah Rukh inspires devotion like no other. In his few days here, the charismatic star provided plenty of fodder to the media, local and mainstream and his appeal has since only quadrupled…
More power to brand SRK.