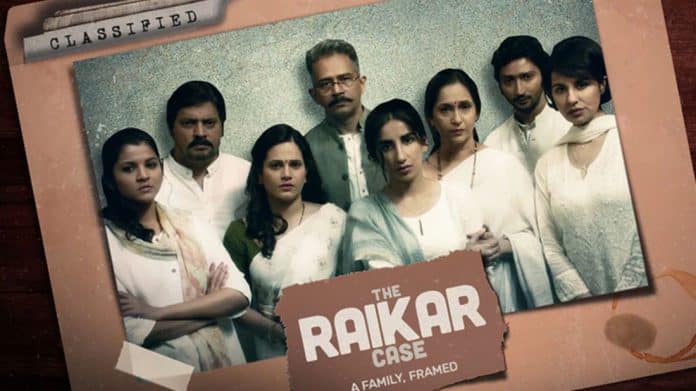 This Voot series is a whodunit that makes its intention clear with the very first scene. The young scion of a powerful clan is out to commit suicide by diving off a cliff. The fall is captured with melodramatic relish as the camera augments the slow-motion impact with a top angle shot.
With this, you get the feeling right at the onset that this will be a ‘desi’ mystery – not too heavy, but loaded with the vintage played-to-gallery burst of emotions.
As the seven-episode storyline unfolds, you realise that this hunch is not misplaced. Series director Aditya Sarpotdar and his team of writers have obviously made extra efforts to balance schmaltz with suspense. It is almost as if they wanted to make a family soap opera that, by the way, is highlighted by a mysterious death.
Tarun Raikar (Honey Kamboj), youngest of the affluent Raikar clan, dives to his death in the opening scenes even as his cousin Etasha (Parul Gulati) makes a futile, last-ditch effort to stop him.
The scene has a catch, of course. Things get dramatic soon enough with the entry of archetypal filmi smart cop, John Pereira (Neil Bhoopalam), who is assigned the case. Pereira takes a look at Tarun’s corpse and declares this could never be suicide. It is murder.
A slew of facts are thrown at the viewers in these early scenes. Tarun, we get to know, would be the sole inheritor of his father’s share in their company as well as property. Etasha seems to harbour some sort of a secret guilt about Tarun’s death. We also get to know that Tarun had given her 12 missed calls before it all ended for him.
In classic whodunit tradition, every member of the Raikar family could have a motive to kill Tarun. As the plot pushes forward, a few skeletons tumble out of the illustrious Raikar closet. The mandatory ingredients of blackmail, power politics and generational rifts are liberally used in the narrative, as the police get going with their probe of a fresh suspect in each episode.
It’s all executed without too many complications, which allows for an effective tempo even in the comparatively slower middle episodes. Yet, what you don’t amusingly miss is the way in which the narrative unwittingly lets in the soap opera elements at the slightest chance. It is more than evident in the pervading background score, at times really distracting from the intended solemn mood.
That sort of a treatment is also palpable in key scenes where the entire family congregates in one expansive room, and the camera does a full pan before settling on a particular protagonist, upbeat background music very much in place. You almost miss the K-soap bahu in such frames.
Still, The Raikar Case should keep you hooked till the end for two primary reasons. First, it has been written cleverly despite its melodrama hangover, particularly the way each episode ends on an arresting note.
The other impeccable aspect is the show’s cast. Atul Kulkarni as the patriarchal head Yashwant Raikar is flawless, and Ashwini Bhave returns to mainstream Hindi fare after a hiatus with delightful poise. Neil Bhoopalam fits into his uniformed cop avatar with effortlessness while Parul Gulati is adequate for most parts, though she tends to go over the top in stray moments.
The Raikar Case should regale if you are looking for some suspense drama that does not sit too stressfully on your senses. Although nothing out of the box, this is binge therapy for the buffs who prefer their mysteries not served too dark.