The Manganiyar musicians return to Oz, back by popular demand 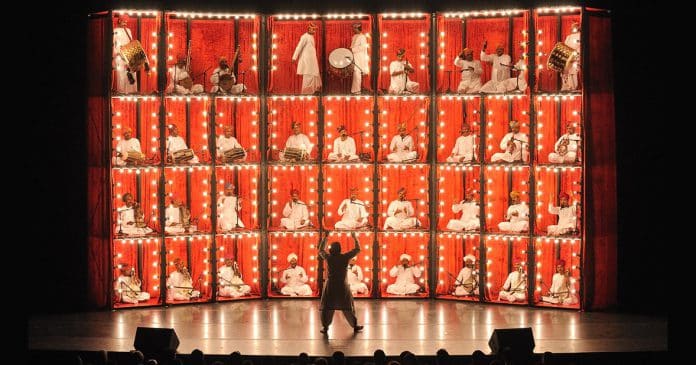 The Manganiyar musicians of Rajasthan are all set to wow Australian audiences once more.
They come to us as before in Royston Abel’s show The Manganiyar Seduction, which enjoyed a hugely successful season here in 2010.
Since then, the musicians have travelled all over the world, seducing audiences with their particular take on Sufi music.
Abel presents them in a curious blend of theatre and music, in his typical style of taking a very traditionally Indian art form and contemporising it for the international stage.
The turban-clad moustachioed musicians appear on stage sitting in individual boxes, each box lit up with carnival lights.


Each musician is introduced as the spotlight shines on various intersections of a giant scaffold, well into the rhythm with his particular instrument, be it the string instrument khamacha, the percussion instrument khartal (similar to the Spanish castanas), the sarangi, or the been (snake charmer’s flute).
The 30 musicians are led by an energetic conductor who adds to the theatricality of it all, even though a conductor is unusual in a recital of Indian music. The melody builds up into a glorious and joyful climax at the end of the hour-long show.
“The new show is pretty much the same as what you saw in 2010,” Abel admitted to Indian Link, but added, “Still, you’ll see it crisper and a bit more polished and evolved, because we’ve been working on it. But the joy of it is the same.”
The musicians perform the Bulle Shah number Alfat in bin un bin an bin nuqta yaar parhaya.
Yet, as Abel pointed out, the lyrics are not that important. It is the earthy music that seduces.
“The music comes from a deep source, and touches you deep inside,” he added.
It continues to strike a chord for Abel, even after more than a decade now. He came upon them quite late, he admitted, in his mid-30s.
“Having lived a privileged life after an elite (private) school education, I didn’t get to experience this world at all. But when I was introduced to the folk world – not just the music, but also the puppetry, the magic, the acrobatics, the painting – I could see extreme skill and the great potential there. The music itself may have been dying out then, but to me it was far more interesting than the contemporary music scene. It didn’t take long for me to plunge into it,” he said.

There’s no denying that Abel’s Manganiyar series has done much to revive an ancient Indian art form and change the lives of its rural practitioners. Yet, he is modest about it all.
“I’ve just presented their craft in a different way, in a way that has greater reach and impact. But yes, more people have taken up this art form now. They are in demand at shows and festivals, even corporate conferences and weddings. Some 400 musicians have emerged in the last 3-4 years alone,” he added.
Abel would like to see even more revival. “It is not trendy enough for contemporary musicians, sadly. As well, the craft itself is difficult to learn, requiring great patience and much skill. There’s not many people left that teach the art; in fact there’s only one family that survives, and three of its members are in my show!”
In 2017, Abel presented the next generation of Manganiyars, pre-teen boys in his Manganiyar Classroom.
Now in 2018, given the current movement for gender parity perhaps it’s time to present Manganiyar women.
You could see Abel’s mind ticking as he took a moment’s silence.
“That’s a gem of an idea,” he came back. “But it won’t be easy. Just getting the women out of the house will be a major task… It’s a shame, really, as they are the ones who actually teach the craft.”
Well, we leave that thought with you, Royston Abel: and we look forward to seeing you back here in Oz in a few years’ time with a new show in the Manganiyar series.