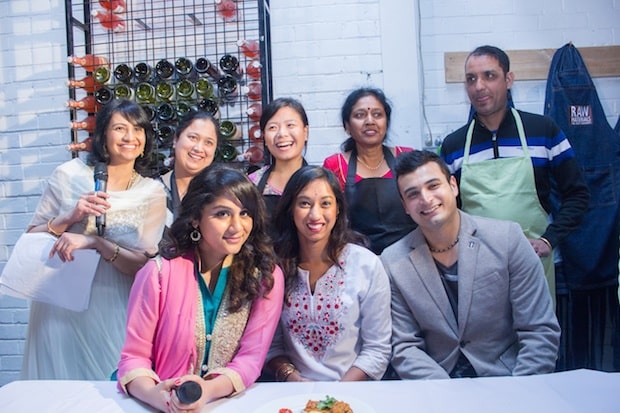 Here’s a recipe for a Saturday night that Melbourne hasn’t seen so far. Take two dishes, add four teams of cooks, and three ex-MasterChef contestants as judges. Mix with an enthusiastic and diverse audience. Garnish with Bollywood music, a lively dance performance and serve. That was The Great Indian Cook Off held recently in Footscray. Organised by Sonali Shah of EverythingIndian.org, the event invited participants to a MasterChef-style cooking competition.

Participants were organised in teams of four to cook Baingan ka Bharta, a popular eggplant dish. Their dish was to be judged by MasterChef 2013 contestants Natasha Shan, Faiza Rehman and Rishi Desai. The team with the best dish went through to the next round where they competed against each other to cook up Sooji ka Halwa (dessert made of semolina). Best halwa wins!

The event started with pizzazz, with a Bollywood dance performance that set the scene for the fast-paced cooking that was to follow. Brows furrowed as ingredients were prepped. Heads came together as strategy was discussed. Timers were set and off they went!

The young judges walked around, gave advice, heaped encouragement and reminded participants that flavour, texture and appearance all needed consideration. The audience was invited to participate, and enthusiastic members milled around the contestants, watching and taking photos as the baingan ka bharta took shape. Onions, tomatoes and eggplant simmered as chapattis were rolled. Thirty minutes flew by and when time was up, the dishes were plated and presented to the three judges.

Team ‘Gulab Jamun’ came out on top and went through to the next round. The four contestants were free to be innovative with the dessert, and were instructed to bring their own ingredients so that they could get creative. The aroma of ghee filled the venue as cashews, almonds and pistachios were prepped to accompany dessert.

One of the participants, Bangalore-based Rajeshwari Rajagopal, who is in Melbourne to visit her daughter, made a bold move and added mango essence to the dish. Sanjeev Gogna was very liberal with the ghee and fried it to give it a bit of texture, while the other contestants, Dianne and Gurpreet, kept it simple and followed the recipe. This worked in Dianne’s favour, and the judges deemed her dessert just right in texture and flavour to be the winner.

“It was a bit freaky,” she told Indian Link. “I’ve never made it, never seen what it looks like and don’t know what it tastes like! I didn’t expect to get through the first round, so I didn’t even bring my ingredients!” Another contestant came to Dianne’s rescue and she followed the recipe step by step to win the contest.

The interactive and casual format of the contest was fresh and kept the audience engaged. MasterChef 2013 contestant Faiza Rehman reflected on her Indian and Pakistani background.

“It makes me proud of my heritage. This event has brought so many communities together,” Rehman said.

Natasha Shan echoed the same sentiment and went on to talk about how much things have changed. “When I first came to Australia in 2005, there were no Indian people on TV. But with MasterChef, you’ve seen people of your own colour. Parents have come to me today and said their children are proud of being Indian at school. And that makes me proud.”