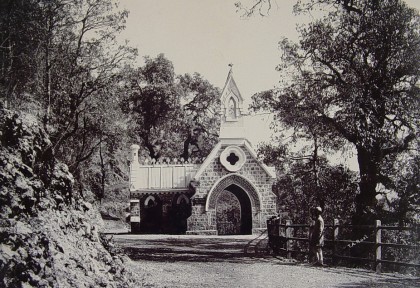 “All hill-stations have their share of ghost stories” writes journalist Sheela Reddy. “But the Doon must be the only spot that can boast of so many writers, living and dead, who have turned their home into their muse.”

The lychgate of the Camel’s Back Road Cemetery.
Anne_nz/Flickr, CC BY-SA
The Doon is a quiet valley of hamlets in the state of Uttarakhand, India. It is home to a nearly 200-year-old English literary tradition and many Victorian styled decaying structures. Of all its little townships, Mussoorie and Landour comprise what is arguably the most fertile literary territory in the country.
Well-known writers from the valley include the legendary octogenarian author Ruskin Bond; historian Ganesh Saili; Stephen Alter with his warmhearted recollections of an American boyhood in the Indian hills and intrepid romances; the travel writer and spiritualist Bill Aitken; and the thespian-turned-essayist Victor Banerji.
Around the mid-1820s, Mussoorie became of the first sanatorium in British India. It was established by Captain Frederick Young, founder of the Sirmour Rifles regiment, who also sowed the first potato seeds in the valley.
While Rudyard Kipling seemed to be more partial towards his beloved Simla, Victorian writers such as Emily Eden, Fanny Parkes, John Lang and Andrew Wilson gave us numerous literary and epistolary writings on Mussoorie.
Most of them became characters in the ever-expanding folklore of the valley. Some turned into the endeared ghosts that are said to haunt the region.

The past and its apparitions

From time to time, the Doon’s literary and historical legends emerge to posthumously assume the mantle of the guardian of the valley’s innermost secrets. And current-day writers have ensured that these secrets are well-preserved in the splurge of literature that the hill-station has produced in the past two decades.
In 1964, Ruskin Bond discovered the grave of John Lang in the Camel’s Back cemetery. Lang was an Anglo-Australian-Indian barrister, who had opposed the Doctrine of Lapse in the Indian courts.
The Doctrine of Lapse was a policy of annexation promulgated by Lord Dalhousie, the then Governor General of India, which decreed that any Indian state whose ruler had either died without a male heir or was ruled by an incompetent leader would be annexed by the British Empire. Since the discovery of his grave, Lang has been a standard feature in the Doon’s literary musings.

Another legendary character was Frederick (Pahari) Wilson, also known as the Raja of Harsil and his second wife, Gulabi. They are among the hill-station’s most recurrent ghosts.
In 1883, Wilson’s obituary in The Pioneer described how he came to the valley:

[Wilson] started from Calcutta, armed with five rupees and a gun on his long march to the Himalayas … He lived for many years by the sale of what he shot, and finally embarked on timber contracts in the forests … until he amassed a considerable fortune.

Although he was not an author, he built the Wilson bridge over the Jadganga river, traces of which remain today. Kipling came in contact with Wilson, took a fancy for the legends surrounding him, and used his biographical details for his story, The Man who Would be King.
The ghosts of Gulabi and Pahari Wilson are said to still lurk in the Doon, largely owing to one of Bond’s supernatural stories, Wilson’s Bridge.

Young’s ghost is also an alleged regular at Mullingar flat. Today, Ganesh Saili and his family reside there. According to Saili:

[Young] astride a white horse arrives at the old Mullingar lodge, ties his steed to the remnants of the old wrought iron railing and … waits for the parade of Redcoats to begin.

Young, too, was an author of sorts. He may not have written anything but he helped build St. Peter’s Church and the area around the Sister’s Bazaar in Mussoorie, shaping the literary personality of the town.

Aside from ghosts, the other formal aspect of Doon’s literature is architecture. Writing about India’s hill-station buildings, Giriraja Shah explains:

A good number of historical monuments are famous, more because of the proper exposition of hoary romance, antiquity and myths … than the visible splendour of art and architecture.

Buildings in the region’s writings seem to embody the ghosts themselves, a kind of hauntology: where the literary landscape is a ghostly simulation of the lived space.

Although Mussoorie’s buildings are offshoots of the Swiss-Gothic form – a style praised during colonial era in the Himalayas – it certainly is not a place replete with architectural intricacies. The Savoy Hotel, the Mussoorie Library, Skinner’s Hall, and some other old buildings and the churches of the township do exhibit the usual spires, gables, dormers, balustrades, pilasters, Glasgow-built lampposts, and colonnades. But these features are not as architectural as the state of disrepair itself in which the buildings find themselves.
The renowned architect-turned-scholar Bernard Tschumi, once gave an “Advertisement for Architecture” with an old photograph of the Villa Savoye, with the caption: “The most architectural thing about this building is the state of decay in which it is.”

In literature, as also in reality, Mussoorie and Landour live in a state of aesthetic decay.
The names of their houses invoke a landscape set in a parallel timezone. Mullingar, Zephyr Lodge, Companybagh, Cloud End, Tipperary, Killarney, Shamrock Cottage, Scottsburn, Connaught Castle, Hampton Court, or those borrowed from Sir Walter Scott’s novels such as Kenilworth, Ivanhoe, and Rokeby (the last now converted into a pleasure resort, keeping intact the stony façade of a castle).
Landour preserves the memory of those Anglo-Indian spirits that refuse to acknowledge their extinction. Tourists are seduced by the town’s literary ghosts. And every once in a while, an ordinary night’s peace is disrupted by the purportedly paranormal interventions of a dead memsahib such as the spiritualist, Frances Garnett-Orme.
Her ghost is said to linger in the valley or the corridors of the Savoy Hotel, where she was allegedly poisoned to death, over a hundred years ago.
We might wonder whether the hauntings at Landour have any experiential element or are simply practical fictions conceived amid the solitude of the hills. As Ruskin Bond candidly stated, “when I run out of relatives, I invent ghosts.”