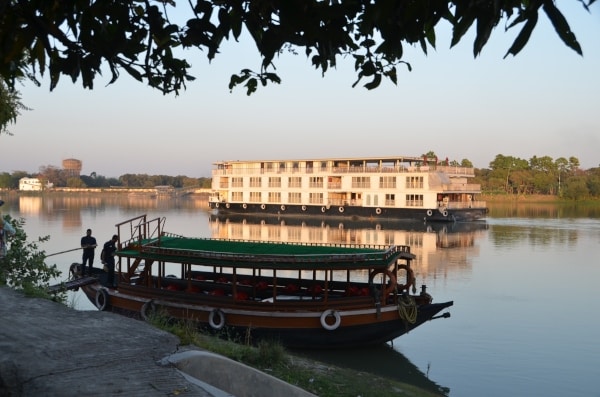 In early 17th century, India’s share of the global economy was around 25%, as large as all of Europe put together. India’s wealth and its rich produce from spices and silk to pottery and jewelry lured the Europeans – Portuguese, Dutch, Danish, French, Armenians and the British – to establish outposts at riverside locations along the Ganges in the eastern part of the country.
All of them were initially granted permission by the representatives of the Mughal Emperors in Delhi to set up settlements as traders, but as history says, other than the Armenians, all had an eye for territorial control in the region. Today their legacies are more stored in the pages of history books than in bricks and mortar; still, a stop at these riverside junctions, nestled within the 50 km stretch from Kolkata, is a dip into the growth and fall of European
colonization in the subcontinent.

Hooghly & Bandel
At the beginning of the 16th century, the Portuguese with the grant from Mughal Emperor Akbar did set up a colony in Hooghly, but within a few decades became a terror in the region as pirates. So the Mughal regime seized all their power, uprooted them from Hooghly and later resettled them as missionaries at Bandel (literally, ‘mast’ in Portuguese) where they built a church in 1599. Renovated several times later, the church still exits as one of India’s oldest Christian shrines.

Chinsura
The Dutch were next to arrive. Around 1610 they set up a trading post at Chinsura, where they built a fort, a church and several noble houses. None of them exists today; they
were demolished by the British when in 1825 they grabbed Chinsura in exchange for the island of Sumatra in Indonesia. What remains today is a cemetery bearing testimony of Dutch presence in the locale.

Serampore
Not far from Chinsura is Serampore where the Danes lived from 1755 until 1845 when they left the shores selling their settlement to the British East India Company. While flourishing as a trade centre, the Danes built a church and a college, both of which still exist and were recently renovated with a stupendous initiative from the National Museum of Denmark. A Danish tavern and two graveyards from the period have also been restored to bring alive
memories of Danes in Bengal.

Chandannagar
The French got hold of Chandannagar in 1673. Unlike the other European townships this still boasts of extensive French heritage, primarily because it stayed on as a slice of
France until 1950. Even today French is still taught at many local schools. The town’s riverside promenade called ‘The Strand’ is one of the most picturesque parts of the
region’s waterfront. Still many French-built mansions flank the passageway along with the former French Governor’s House, now a museum and a 19th century church, just a
minute away from the river.

Kolkata nee Calcutta
Calcutta now called Kolkata unquestionably is the epicenter of European colonization in Eastern India. Founded by Job Charnock, a Lancashire born businessman in 1686, it
was developed in the 19th century on the Ganges as a replica of London on the Thames. Referred by Her Majesty Queen Victoria as the second city of her empire, it remained the capital of British India until 1911. After seven decades of Indian independence, the legacy of the empire has faded, but the ensemble of the quality colonial architecture and lifestyle – embellished with cricket, cocktails, curries and cakes – still identifies the city. It has
become a place of near pilgrimage to the admirers of Raj who reminiscence the legacy by meandering in the Esplanade, strolling along the riverside Strand, glimpsing British-made red edifices, and relishing art and history inside Victoria Memorial (a structure that looks like the Taj Mahal) or frequenting one of several old gentlemen’s clubs for a gin and tonic. The Armenians also arrived this city in the 17th century and many of their leftovers still exist, Armenian Church being the most prominent.

For international travelers, a fast-growing way of sampling Kolkata and the other colonial strings is by embarking on an upstream river cruise from Kolkata abroad Ganges Voyager I & II – the two luxury vessels owned and operated by the Delhi-based Exotic Heritage Group. For cruise details visit The Exotic Heritage Website.