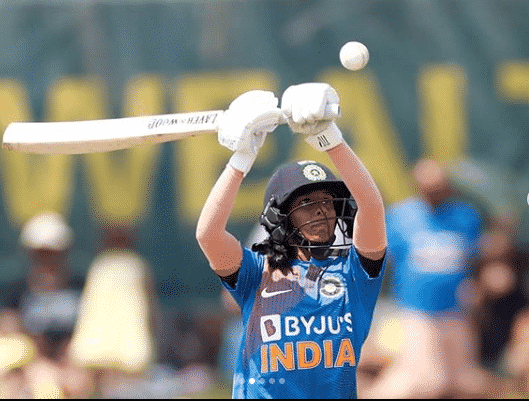 With less than two weeks to go until the ICC Women’s T20 World Cup begins with a mouth-watering tournament opener between Australia and India in Sydney, India’s Women in Blue have surprised many by defeating both Australia and England on their way to the final of the warm-up tri-series. Though the team ultimately came up 11 runs short in the decider against the hosts, all signs point to a promising World Cup campaign for a young Indian side littered with talent.

Indian Link caught up for an exclusive interview with one of its most exciting stars, 19 year-old batter, Jemimah Rodrigues.

Rodrigues, who bats at number three for India, grew up playing cricket under the guidance of her father Ivan, and alongside her two older brothers Enoch and Eli. Another product of Mumbai’s sprawling maidans, at the time that Rodrigues picked up her first cricket bat at the age of three – a plastic bat handed to her by her grandfather – she was barely aware that organised women’s cricket even existed.

The unwavering support of her family, however, saw Rodrigues flourish, even as women’s cricket struggled to find its voice in India. “In India, it’s hard for girls especially to play cricket,” says Rodrigues. “My family was never bothered by what people would say. Through tough times, my family believed in me and gave me strength.”

Some of the “tough times” included being turned away from cricket nets where “only boys” were allowed to practice, and being virtually ignored as the only girl in a boys’ academy. Yet even in the two years since Rodrigues made her international debut, women’s cricket in India has advanced beyond recognition.

It’s a shift Rodrigues attributes to the 2017 Women’s World Cup, in which a talented Indian side lost a close final to hosts England by just 9 runs. “After the 2017 World Cup, people realised that women’s cricket doesn’t just exist. That has changed. Before, you didn’t have too many girls practising cricket together. Now, there are so many girls’ academies, and so many girls come up to me and say, ‘We want to play cricket, where can we play?’
That’s changed dramatically for us in India. I think the better we do as cricketers, the better [women’s cricket] is going to get in India. It means there’s a bigger responsibility on our shoulders.”

Jemi, as she is affectionately known, has always been earmarked for greatness. A precocious talent with hockey stick and cricket bat alike, having played at a state age level in both sports, Rodrigues was only 13 years old when she was selected for Mumbai’s under-19 team. Just three years later, Rodrigues made international headlines when she smashed an unbeaten 202 off just 163 balls for Mumbai’s under-19 side in a 50-over match.

Since then, the achievements and honours have continued amassing at a staggering rate. Rodrigues made her Indian debut in February 2018, and in June 2018, was awarded the Jagmohan Dalmiya Award for Best Domestic Junior Women’s Cricketer by the BCCI. By the end of the ICC Women’s World T20 in the same year, Rodrigues was seen as the player to watch in a star-studded Indian line-up.

Speaking to Indian Link about her path to the top, Rodrigues is humble, but noticeably excited for what lies ahead.

“It’s been a crazy journey for me,” she reveals. “There have been ups and down. I’ve seen a lot of progress [in myself] over the last few years from when I joined the Indian team, but there are still more areas I could get better. Sometimes I pinch myself and think, ‘Am I really playing for India? Did all of this really happen for me?’ But all of a sudden one day you’re playing for India and doing well. I hope to continue the same thing and keep getting better and not worry about scores and trophies. I want to keep playing cricket for the reason I always have – because I love it.”

With a 100,000 strong social media following, Rodrigues is popular for uploading the type of light-hearted, candid content that you might expect of any teenager. In an era where athletes are coached at an early age on how to conduct themselves with restraint and reservation, it is refreshing to see Rodrigues so comfortable in her own skin: a bubbly, chatty and goofy teenager with a passion for sport, music and animals. A keen singer, Rodrigues’ guitar travels with her everywhere, and the teenager enjoys “jamming together” with her teammates.

But it is Rodrigues’ self-awareness of her roots that holds her in good stead for the bright future which now seems inevitable. “Something my parents have taught me from a very young age is that no matter where you go, never forget where you started. [The pressure of social media popularity] does come into my mind. What keeps me grounded is what my parents have told me. They always say, ‘What you’ve gotten is a gift from god and not from
you’. Where I have reached is because of the people around me – I can’t take the credit.”

Her first World Cup will present myriad challenges, though Rodrigues admits she has warmed to the Australian pitches, which she rates as “the best wickets to bat on”. Having played a key role in India’s record chase of 173 against Australia earlier in the tri-series, the explosive top-order batter cites the wins over Australia and England as critical confidence boosters for the entire team, despite losing a close final to the hosts from a
winning position. “The team has done really well, honestly. [The group match against Australia] was a total team effort. It wasn’t just one person who did well in batting or bowling, but everyone chipped in at the right time. It was so nice to see the whole team involved.”

With the ICC hoping to break the world record for highest attendance at a women’s sporting event by filling up the MCG for what promises to be a historic final, Rodrigues and her teammates are not short of motivation to go far in the tournament. “Growing up, our dream was always to play for India,” says Rodrigues. “Then the dream became to win a World Cup for India. Now, the dream is to win the World Cup in Australia in front of
90,000 people at the MCG. It’s really exciting. I can’t explain in words what it means to me and the team.”

And with wins against pre-tournament favourites Australia and England under her team’s belt already, it’s not out of the question that Rodrigues will keep seeing her dreams come true.