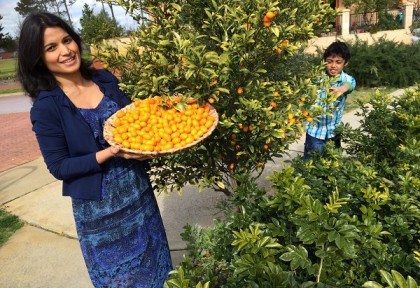 As a food scientist, registered nutritionist and consultant for the food industry, Dr Shyamala Vishnumohan believes that she has a great role to play in influencing the community.
Dr Vishnumohan is passionate about the nutrition in plant-based food. She works as a consultant for pulses with the Grain Industry Association of WA and is also an Adjunct Associate Lecturer in the Department of Food Science and Technology at the University of NSW. In addition to these formal tags, her interest in inventing ways to promote plant-based food has also made her quite a ‘recipe developer’.
In an age where we are becoming increasingly disengaged from nature, the work of Dr Vishnumohan comes as a breath of fresh air.
Shyamala lives in Perth with her husband, two kids, a fish tank and a beautiful garden filled with trees – olive, lemon, lime curry-leaf and kumquat, to name a few.
Her love of vegetarian food blossomed in her childhood days, most of which were spent in the southern Indian state of Tamil Nadu.
“I grew up with rice paddies around me,” Shyamala says, nostalgically. “But today I know rice only in its polished form in glossy packaging at the grocery store. The story of food starts at the grocery store and ends in our bellies. We are becoming more and more disconnected from the source.” Indeed, this is the story of our urban lives.
A recent TED talk by British chef Jamie Oliver inspired Perth’s Dr Shyamala Vishnumohan so much that she decided to join his mission to ‘teach every child about food’.
Today, as an Ambassador for the Jamie Oliver Food Revolution, Dr Vishnumohan conducts regular voluntary activities in the community, involving children in food preparation.

As part of her mission to engage, educate and empower as many people as possible to embrace wholesome food, Shyamala has initiated and designed a five-week Food Literacy and Healthy Eating program. It has been piloted at the Aubin Grove Primary School in Perth, delivered as part of the Health and Physical Activity curriculum.
“We have to put food back into curriculum,” Shyamala exclaims. “The program has a back to basics approach – fun, engaging and interactive.”
Shyamala is happy to note that she is not alone in this cause. There is immense support from informed parents, teachers and the community.
Karen Barford, an Aubin Grove teacher who is equally passionate about food education, reports some interesting feedback. One child refused to eat a particular snack food because it had more than 20 ingredients in it. Another child was happy bartering plain yoghurt for a particular brand of fruit yoghurt because it was loaded with sugar.
“We are hearing more and more positive change stories like these,” Shyamala reveals. “Karen is formally evaluating the program, and is finding that kids are now educating their parents! Through children, sometimes, families learn good habits.”

Her work also involves liaising with Woolworths and Trandos Farms who donate their fresh produce for children to indulge their senses.
“I kicked off my first Food Revolution Day on 20 May this year at the Family Tree Early Learning Centre. We made beautiful vegetable rainbows as a simple way of reminding the kids that a variety of fruits and vegetables in the diet will get them the vitamins and minerals they need. We learnt to make Jamie’s hummus with Australian chickpeas as the ‘hero’ ingredient,” she reveals.
Some of the ‘big hit’ activities she has conducted as a Food Revolution Ambassador, include the Fairy Tale Smoothie Bar,  where kids are involved in making their own smoothies. ‘The Hulk’ smoothie with loads of spinach is always the star of the show! Other sessions include getting the kids to see how popcorn is made from corn kernels and the science behind the browning of apples.
“Making it fun and marketing it right to the kids is the key. If it is just going to be another lecture, it will not work,” Shyamala points out.
She believes schools can play a stronger role in influencing good food habits among children.
“Schools must teach kids about pulses, vegetables and fruits, and where the food comes from. Healthier kids growing up armed with knowledge make good lifestyle choices,” she observes.
As we conclude our talk, she has a strong message for all parents: “Meals cannot be balanced if there is no variety in them, so experiment with food, go back to nature and involve your children. They are the makers of the world ahead and which must reclaim nature. Sow the seeds at home”.

A significant area of Dr Shyamala Vishnumohan’s research work is on the lupin bean, a legume that is a goldmine in itself. Impressively, lupin is the world’s richest source of combined protein and fibre with negligible starch. Western Australia produces 85 per cent of world’s lupin. There has been a steady growing international market for this nutritious legume.

“Don’t be surprised if I say that the human consumption rates of this exceptionally nutritious grain in Australia is mere five per cent and most of it is because of lack of awareness of the goodness in this nutritious pulse,” Shyamala states.
When asked about the taste, she says, “If the Indian chickpea flour had a long lost cousin from Australia, it would be the lupins. It is our very own superfood.”
Shyamala is pleased to share a vegetarian pancake recipe inspired by Australian lupins for Indian Link readers. This recipe was also published in the national cookbook called Australia Cooks this year.
Vegetarian Lupin Savoury Pancakes
The Indian-inspired savoury pancakes are made by combining lupin flour with chickpea flour, vegetables and a wonderful zing of ginger, chillies, turmeric and coriander leaves. Lupins add a new dimension to healthy eating and are sure to satisfy your rumbling appetite and demanding taste buds.

Nutritional value of lupin flour
40% protein | 30% fibre | Negligible starch | Zero GI | Gluten free | GMO free | Low anti-nutritional factors | Low in potentially toxic phytoestrogens found in high levels in soy
Prep time: 15min
Cooking time: 15 min
Ingredients
½ cup lupin flour
½ cup chickpea flour
½ small onion, finely diced
¼ medium tomato, minced
¼ cup vegetables (mashed potato, finely diced carrots, zucchini, capsicum)
1 tsp grated ginger
1 tsp red chilli powder
¼ tsp turmeric
Salt to taste
¼ cup chopped coriander
Olive oil for cooking
Method
Place all the ingredients in a mixing bowl and stir them together. Set aside for about 15 minutes. This is because some of the vegetables will express water when mixed with the salt, and this will give you a better idea of how much water you need to make the batter.
Add water (around 2 1/2 cups to make a batter slightly runnier than a pancake batter).
Always make sure you add water slowly, mixing as you go. There is no gluten in this batter so you don’t have to worry that it will toughen up with too much stirring, the way a traditional pancake batter would.
Heat a well-seasoned cast-iron skillet or non-stick skillet and spray lightly with oil.
Pour about half a cup of the batter in the center with a rounded ladle and spread slightly with the bottom of the ladle to get an even-looking round. Cook on medium heat until the sides dry up and the bottom of the pancake turns richly golden-brown.
Flip over and cook until the other side turns golden-brown.
Serve hot with yoghurt, herby sour cream, tomato chutney or pickles

Note: Lupin, like other protein containing foods ( e.g. peanuts, soy, dairy, shellfish, eggs) may trigger an allergic reaction in a small percentage of the population. Some people who are allergic to peanuts may also react to lupin.