Daring mission: Indian all-girl crew sailing around the world stops by at Oz

An all-girl Indian crew on a daring mission stops by at Fremantle. SAI NARAYAN and RAJNI ANAND LUTHRA report. 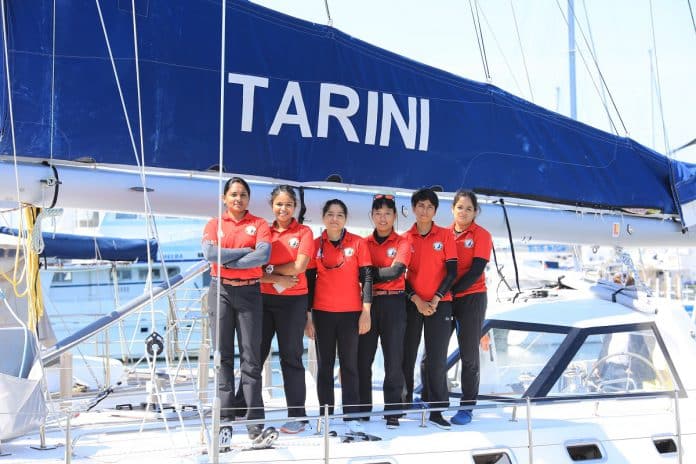 For a young woman who grew up in the mountains, Vartika Joshi has done pretty well as a sailor.

The spunky Garhwal girl is leading a team of six Indian women who are circumnavigating the globe on a sailing vessel. Her boat, INSV Tarini of the Indian Navy, is currently at Fremantle WA, in its first stop on a 7-month voyage.

As she guided her crew in to Fremantle, the 56-foot Tarini had been at sea for 44 days and had sailed 4800 nautical miles. Read more about INSV Tarini

A welcoming committee awaited, made up of the local Indian community, the Indian High Commissioner Ajay Gondane, Consul General of India (Perth) Amit Kumar Mishra and others of the diplomatic corps, and the media.

“It is wonderful to see this welcome,” skipper Lt. Commander Vartika Joshi said upon coming ashore. “Having been tossed about on the seas, and having been away from home for so long, it’s the warmth of this welcome from the people here that we will take with us when we go back to sea.”

The all-girl crew of the INSV Tarini, under the program Navika Sagar Parikrama, was flagged off from their base in Goa by another woman, India’s Defence Minister Nirmala Seetharaman, on 10 September. Their project, christened ‘Navika Sagar Parikrama’, is the first attempt by Indian women to circumnavigate the world.

“Our aim is to promote the idea of sailing, even amongst men,” Vartika toldIndian Link, in her trademark calm and collected demeanour. “Sailing as a sport is not exactly popular in India! We are also aiming to encourage more women to take up adventure sports.”

After a fortnight-long halt at Fremantle, the girls will proceed to Lyttleton (New Zealand), Port Stanley (Falklands) and Cape Town (South Africa), before returning to home base on 18 April 2018.

To be technical, circumnavigation requires the vessel to be in open waters at all times and not in canals or straits. The Equator must be crossed at least once, and the total distance covered must be more than the circumference of earth, ie, 21,600 nautical miles.

Life on the high seas

“We’ve had a mix of calm weather and rough seas in our journey so far,” Vartika recounted. “When we set sail, there were no head winds. This reduced our speed – it was frustrating. But that has been our only low point thus far.”

The highpoints have been many, the girls chipped in.

“Dolphins – we saw plenty of dolphins,” offered Swati. “I was on watch on one occasion when some dolphins came around. The sailboat doesn’t make much noise, and these dolphins just roamed around us casually. What we saw first was a streak like a white doodle, or a big white snake. I froze for 5 or 6 seconds, then I calmed down and realised what it was. It was a sight to see, as they came at us like a torpedo!”

Killer whales were sighted too, she revealed. “We saw some baskets floating around, with some fish underneath them. It was like ‘man overboard’. We thought we’d do a drill, pretend the fish is a man. We tried recovering the whole thing for over an hour, tempted by the fish which was very colourful and attractive, but gave up ultimately.”

Another highlight was Diwali at sea, and a call by the Prime Minister himself. Vartika recalled, “We were an hour and a half ahead of India, expecting PM Modi’s call at 1600 IST. We set about making our flour diyas and drying them in the sun. A call came through and we thought it was be a trial call, but it was the PM… he had called early! We were like, oh no, we’re not ready!!” Of course, the call was shared nationally.

There has been plenty of work was well. The ladies have been collating and updating meteorological, ocean and wave data on a regular basis for accurate weather forecasts by the India Meteorological Department (IMD). The Indian Ocean has seen some horrific natural disasters in recent times and many resources are being invested to gain a better understanding of weather conditions.

They’ve also been also monitoring marine pollution, and have recorded lower levels south of the equator.

Food and watch duties were shared on a roster.

“We keep fresh food to last us for about 10-15 days,” Vartika described. “Then we switch to dry rations which we reconstitute with hot water.”

There was however, a particularly rough patch with the weather.

“We were expecting to hit a cold front in the southern hemisphere and had been preparing for it even five days in advance,” Vartika revealed. “We had no idea though of what the intensity would be. When the storm came it was high in intensity – with winds of 35 knots that picked up much more. We hadn’t ever experienced winds like that before, so it was a little bit scary but we came through it well.”

How it all began

The Sagar Parikrama (literally, circumnavigation) program began in 2009 when Cdr Dilip Donde set off on the first-ever solo expedition. Following him, Cdr Abhilash Tomy bettered the record by accomplishing this feat non-stop and unassisted. Both sailed on the INSV Mhadei, the navy’s first sail boat that Donde helped build.

In an attempt to keep up this newly established tradition, the Indian Navy struck upon the idea of having an all-girl crew take up the challenge.

“The call for volunteers went out in 2014,” Vartika said. “Three women sailors including me were picked for a mixed crew, on an experimental basis. Although the Navy had female officers by then, they were not serving in the field. There was no history of women on ocean-going platforms. But we coped well in our little experiment, and it was agreed we could take it up further.”

Volunteers were sought then for INSV Tarini. “Twenty applications came in; six were picked. We belong to different cadres – two of us are naval architects, two are from training, and two from air traffic control. The Navy gave us the option of pulling out whenever we wanted.”

Vartika loved the experience, having sailed since 2010. But one of the younger girls revealed she found it much harder. “My first few days of sailing were very tough and I thought I would never come back to it. But soon, I was hooked!” The girls mentored by Cdr Dilip Donde, came together as a team in 2015. They clocked up nearly 25,000 nautical miles onboard INSV Mhadei and Tarini as part of training, including an expedition from Goa to Vizag for the International Fleet Review 2016, two expeditions to Mauritius (in 2016 and 2017), and a voyage from Goa to Cape Town. They also participated in the sailing race Cape to Rio earlier this year.

In its fortnight-long break at Fremantle, INSV Tarini is undergoing regular maintenance checks and replenishment of supplies for her onward journey.

“There is much to prepare for the next leg of our travels,” Vartika noted. “Southern Ocean conditions are known to be even rougher so we are preparing the boat as well as ourselves.”


The young crew have also been out and about, meeting and talking to people. They have been welcomed warmly at schools and universities, at media interactions and within the local Indian community, the curiosity always high about a group of young Indian girls on a daring sail across the world. Particularly interesting for the girls themselves have been their meetings with women in high profile positions, such as WA Governor Kerry Sanderson, the Deputy Mayor of Fremantle Cr Ingrid Waltham, President of the WA Legislative Council Kate Doust, and Deputy Lord Mayor of Perth Cr Jemma Green.


One of the stated aims of the program has been to showcase Nari Shakti, or women’s empowerment. “This would also help to discard the societal attitudes and mindset towards women in India by raising visibility of participation by women in challenging environments,” a government communique had declared.

Pratibha is particularly keen on this show-and-tell feature. “We want to meet people and tell them that Indian women are doing this, on a boat that’s made in India.”

In recent years, India has been taking a renewed look at its naval program. Programs to modernise – and indigenise – its platforms have been announced in the backdrop of increased naval activities in the Indian Ocean Region, and also as concerns grow for it as a trade route and as a region vulnerable to natural disasters.

In light of this, its attempts to find larger roles for its women officers is a welcome initiative.

No doubt the next level up in the Sagar Parikrama program will be a solo circumnavigation – unassisted and non-stop of course – by an Indian woman.

We keenly await this announcement.