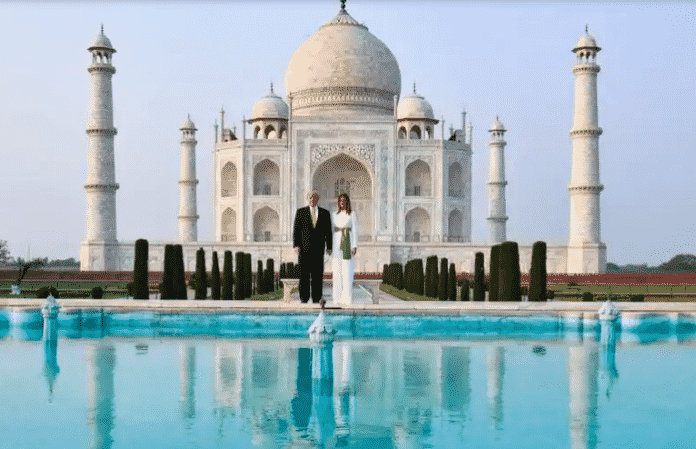 US President Donald Trump during his visit with spouse Melania Trump to the Taj Mahal, on Monday, inquired about the magnificence and historic significance of the monument built by Emperor Shah Jahan for Empress Mumtaj Mahal.

Their guide Nitin Singh, known for accompanying VVIPs to the monument, explained the history of Taj Mahal to the US couple. He addressed all questions and inquiries, and shared with them historical facts during their about an hour stay at the 17th century monument — the symbol of love.

Speaking to media, Singh said, “After the US President got down from the battery-operated golf cart, I informed him the reason behind use of such carts. After entering the Taj Mahal, I informed them about the monument’s four gates and requested them to stand near the fountain channel below the platform.” Trump agreed to the request and stood there for some time.

When they started to move towards the Taj, Singh shared with them the monument’s history, why it was built and how much time it took.

“I also informed them about the white marble platform on which First Lady Jacqueline Kennedy and Princess Diana had sat to get themselves clicked. “The President and the First Lady of the US stood there to get clicked. When I requested them to hold each others hands as they walked along the water channel towards the Taj, they accepted my advice,” Singh said.

Singh said it was the first time that a President walked towards the Taj holding the hand of wife. Trump then thanked him and said it was such an “experience which we will never forget in our life”, Singh added.

Once inside the monument, Trump asked about the engravings in marble, mistaking them for paintings. “When I said they were engravings with 28 types of gems, he asked whether such artisans were still around. I said artisans in Agra still make such marble engravings,” Singh said.

After that Singh took the First Couple of the US to the minaret of Taj Mahal and requested them to spend some time together and watch the sunset from there. “After seeing the sunset, Trump said it was one of the best memories of their life.”

Singh also said the President and the First Lady neither went towards the river Yamuna nor did they go to see the original graves of Mughal ruler Shah Jahan and his wife Mumtaz. Trump is 6 feet 3 inches tall, hence the personnel deployed for his security advised him not to visit the graves.

After visit, Trump wrote in the visitor’s book: “Taj Mahal inspires awe, a timeless testament to the rich and diverse beauty of Indian culture! Thank you, India.”

This is Trump’s first state visit to India and also the first standalone visit by a US President. Before him, Bill Clinton visited Agra in March 2000 and Dwight D. Eisenhower in 1959.