Taj all set to welcome Trump 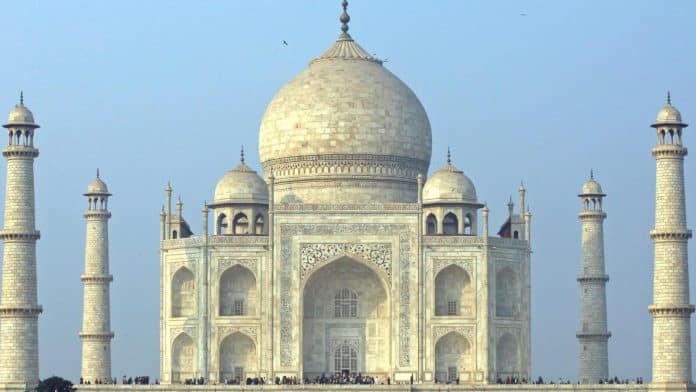 The dry and polluted river Yamuna at the rear of the Taj Mahal is the biggest concern for the Uttar Pradesh administration engaged in organising a grand welcome to US President Donald Trump, his wife Melania and delegation members who will arrive at the Kheria airport on February 24.

When Donald Trump visits the Taj Mahal, what would be the first likely question that he could ask — “Is the Taj yellowing due to pollution? Is this a river or a sewage drain?”

The senior officials are preparing to answer these questions to present a positive profile of the state and union government that claims to have addressed the twin problem of river pollution and air pollution.

Learning from past experience, especially the visit to the city by the then US President Bill Clinton, who is believed to have called Agra a “ghost city”, as the streets and the main Mall road were sealed and sanitized to present a deserted look, the district authorities have decided to line up students with flags on both sides of the road during the Trump visit.

At several points stages will be erected for local artistes to present cultural programmes.

US intelligence agency personnel alongwith senior state officials have already had a series of interactions. A senior official said more than 5,000 police personnel will line up the main VIP road from Kheria airport’s Ajit Nagar gate to the eastern gate of the Taj Mahal.

A policeman at every one metre is the plan. A major part of the main VIP road passes through the Agra Cantonment area. The military police will man this stretch of the road.

Houses and shops have been listed. Till Sunday evening credentials of more than 3,000 shops and houses had been checked. The municipal corporation of Agra has mobilized an army of ‘safai karamcharies’ and anti encroachment demolition squad comprising retired soldiers.

Over the last two days, the squad has been demolishing all ramps and encroachments on the Fatehabad road. Hoardings and sign boards have been removed causing anger and heart burns.The ones at the receiving end of the sudden action have protested but nothing much has come of it due to the presence of security forces.

Road signals on the Mall Road have been repainted and statues on the roundabouts cleaned. Shops and houses are being white-washed. The colour is off white and cream to give a fresh ambience and also to take the sheen off the yellowing question on the Mughal mausoleum.

The state Horticulture Department is sprucing up trees lining the road and painting the tree guards. A review meeting is scheduled on February 18, to be chaired by Uttar Pradesh Chief Minister Yogi Adityanath, who is leaving no stone unturned to present a dynamic image of the state.

A major cleanliness drive continues on the VIP road with hundreds of municipal workers removing garbage dumps.The VVIP fleet will head from the airport to the hotel Amar Vilas close to the Taj Mahal. The presidential party will then take a ride on electric buses and battery operated golf carts.

The president is expected to return to New Delhi around 6.30 pm.A five-tiered security system will be in operation, with deployment of over 800 commandos. A senior district official said houses and shops along the way were being listed, alongwith hotels and guest houses. At 60 odd points there will be roof-top security.

The annual Taj Mahotsava at the Shilpgram will remain closed for a day.

After Eisenhower and Bill Clinton, Trump will be the third US President to visit the Taj Mahal, the 17th century monument of love.